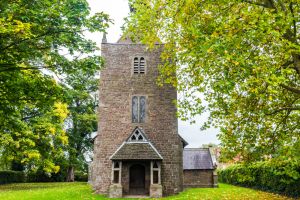 Rotherwas Chapel (or, more accurately, The Catholic Church of Our Lady of the Assumption) was the family chapel of the Bodenham family, dating in part to the medieval period. The chapel features an Elizabethan timber roof, a very striking 18th-century tower topped by a peculiar spire, and extravagant Victorian-era interior paintings. The Victorian remodelling of Rotherwas Chapel was the work of Peter Paul Pugin.

The chapel existed as early as 1304, serving the nearby manor house belonging to the De La Barre family, as a chapel of ease to Dindeor church. In 1483 the manor passed to the Bodenham family. A later owner, Sir Roger Bodenham, extended the manor house and rebuilt the chapel in the 1580s.

Roger Bodenham was made a Knight of the Bath at the coronation of James I in 1603. He was Protestant, at least to all outward appearance, though his wife was recorded as being a recusant Catholic in 1587. But all that was to change in 1606 when Sir Roger developed leprosy.

On the advice of his doctor, he visited St Winefride's Holy Well at Holywell, Flintshire, and bathed in the sacred waters. He was cured of his leprosy and convinced by the miraculous cure to convert to Catholicism.

The story of Sir Roger's miraculous cure is depicted in a Victorian stained glass window in the south chapel. 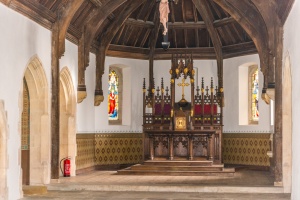 The polygonal apse and high altar

Initially, the conversion did not cause undue hardship, and the church served the local Catholic community. However, the Bodenham family supported the Royalist cause during the Civil war, and as a result, their estates were confiscated. The manor house and outbuildings lay derelict and the chapel was unused for several decades.

The family returned to good fortune in the 18th century and Sir Charles Bodenham rebuilt the earlier manor house as a fashionable mansion in 1732 probably using James Gibbs as his architect. At the same time, he constructed the striking west tower and spire of the chapel.

In 1884 Countess Irena Maria Bodenham called upon Peter Paul Pugin, son of the celebrated Victorian architect AW Pugin, to remodel the medieval chapel in Victorian Gothic style as a memorial to her husband, Sir Charles Bodenham, who had died the previous year. Sir Charles was reinterred in the south chapel, as was Countess Irena when she died in 1892.

Pugin was responsible for adding a vestry and confessional on the north side of the chancel, opposite a small chapel with a fireplace on the south side. He also added a polygonal apse at the east end, containing a beautifully carved gilded wood altarpiece.

The manor house was pulled down in 1926, but the chapel survived and was taken under state guardianship. Services were held here during both World Wars for soldiers guarding the nearby munitions factory. 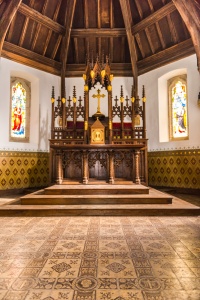 The Victorian sanctuary
by PP Pugin

The bulk of what survives dates to the 16th century, save the three-stage tower, which is entirely Victorian, and rather oddly proportioned compared to the older parts of the building. It is built of sandstone rubble dressed with sandstone.

The interior features a three-bay nave and a chancel with two chapels. The north nave windows are 14th century, but the chancel, sanctuary, and chapel are Victorian. The easternmost three bays date to Sir Roger Bodenham's rebuilding of 1589 and you can make out the date inscribed on a roof timber.

The chapel is well signposted off The Straight Mile (B4399) just east of Hereford. Unfortunately, what the signposts don't tell you is that the chapel is normally locked. The key is easy to get, however; it is kept at the petrol station on The Straight Mile. I decided to walk from the chapel to stretch my legs, and it took me less than 10 minutes to walk from the chapel to the petrol station and fetch the key.

It pays to take your time exploring the interior and see where one time period ends and another begins. At first glance, all you see is the Victorian embellishment but the more you look the more you begin to see signs of antiquity. The Tudor roof is simply outstanding, and I highly recommend climbing the steep stairs to the west gallery for a closer look.

There is a very useful information panel with a history of the chapel, and another with a floor plan and a transcription of the numerous grave slabs scattered about the chapel. These are mostly to the Bodenham family and date to the early 18th century.

I loved visiting the chapel; the interior is almost devoid of decoration save for the ornate wooden high altar, but the striking timber roof, the surviving medieval features, and the Victorian decorations make the chapel a memorable historic building. 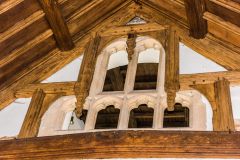 More self catering near Rotherwas Chapel >>