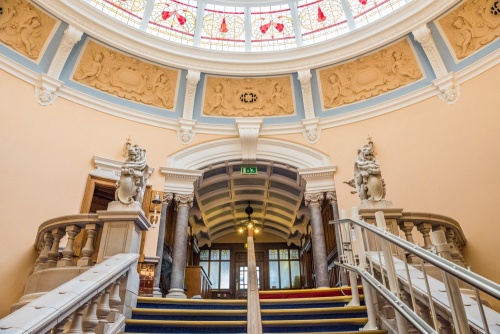 Hereford was one of the first places in England to have a mayor. The city has had Mayors since 1382. You can learn about the Mayors of Hereford in the Heritage suite in the striking Town Hall on St Owen Street, a short walk from the historic town centre.

The elegant Edwardian building was opened in 1904 and houses the town's civic administration, including council chambers and the registrar's office.

The Town Hall was designed by the architect HA Cheers and constructed by WJ Bowers. The result is an outstanding example of Edwardian architecture and is listed Grade II* by English Heritage for its historical value. 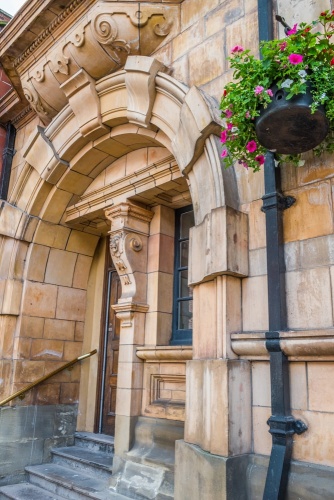 The exterior is made from contrasting colours of terracotta and brick under a slate roof. It is a symmetrical two-storey design with seven mullioned windows over an entrance portico.

The building interior is beautifully decorated with ornate plasterwork friezes and ceilings. The most striking feature is a broad Empire staircase rising up to the top of the building where a stained-glass skylight illuminates the space from above.

The Heritage Suite explores the history of Hereford and its Mayors. See historical treasures and artworks owned by the city in the Mayor's Parlour, as well as a display of civic silver and royal charters dating to 1189. Charters were regularly issued by monarchs to confirm the city's status. The most recent royal charter was issued by Elizabeth II in 2000. 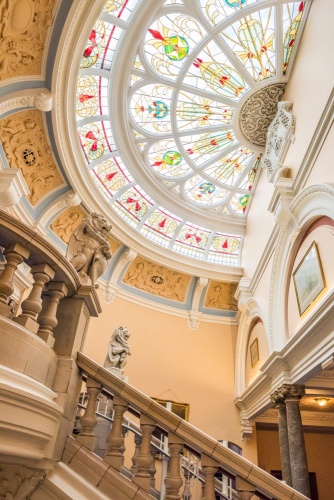 The staircase and inner dome

The town hall is open every weekday during normal office hours, but the Heritage Suite is open for guided tours with limited opening times. Check the official website for current tour times. The Heritage Suite is next to the Mayor's Parlour, the office used by the Mayor of Hereford. Here you can see the city's official swords and other pieces of civic regalia.

Even if the Heritage Suite is closed it is well worth exploring the Town Hall interior. The Edwardian architecture is simply stunning. It is like stepping back in time.

The Town Hall is on the west side of St Owen Street a very short stroll from the Shirehall and St Peter's Church. It is easy to reach on foot from the city centre. The bus depot on St Peter's Square is a stone's throw away.