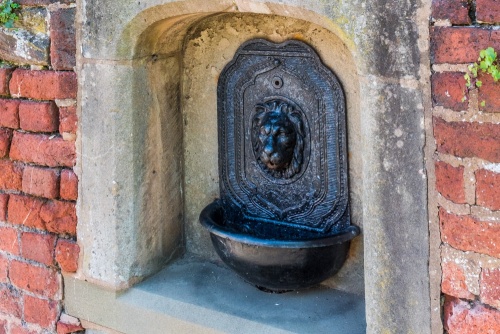 What does an 8th-century king of East Anglia have to do with Hereford? Plenty. Ethelbert II took the throne of East Anglia sometime around AD 779. In AD 794 he journeyed to Mercia to seek King Offa's permission to marry his daughter Aelfthyth (sometimes known as Etheldritha).

In circumstances that remain unclear, King Offa had his royal guest killed, possibly by beheading, in the royal residence at Sutton Walls, just north of Hereford. One version of the story claims that Offa was persuaded by his wife Cynethryth to murder Ethelbert, and the murder was carried out by a man named Grimbert.

The medieval chronicler John Brompton embellishes the story further, claiming that Ethelbert's head fell out of a cart carrying his corpse. It rolled into a ditch where a blind man found it and had his sight miraculously restored. 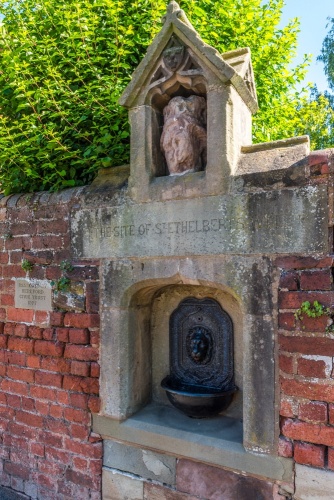 The wellhead and statue

Tradition says that the men carrying the king's coffin to Hereford Cathedral for burial set it down to rest beside a spring on what is now Castle Hill, immediately east of the Cathedral precinct. Visitors to the spring later claimed that the water could cure illness, particularly ulcers and skin sores. Over time a tradition arose to drop pins in the well when seeking a cure.

As for Ethelbert, he was later canonised and his shrine in the cathedral drew pilgrims throughout the medieval period. The shrine and the saint's relics were scattered during the Reformation but a new shrine now stands near the high altar.

The holy well was first mentioned in 1250 and again in a grant of 1359. The famous mapmaker John Speed includes the well in his map of Hereford in 1611.

The antiquarian William Stukeley mentions St Ethelbert's Well in his 1724 Itinerarium Curiosum: Or, An Account of the Antiquities, and Remarkable Curiosities in Nature Or Art, Observed in Travels Through Great Britain. Stukeley records that 'by the side of the ditch arose a spring, which superstition consecrated to St Ethelbert, there is a handsome old stone arch erected over it.' 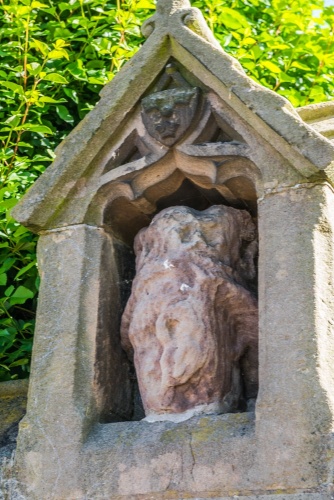 At some point in the 19th century, the original wellhead was lost, and a new one installed. The spring water is now piped into a cast-iron drinking fountain set into a brick wall on the north side of Castle Hill.

Above the drinking fountain is a niche formed of ashlar. Within the niche is a weathered 14th-century stone figure of a king, presumably meant to represent St Ethelbert. The carved figure is thought to have come from the west front of Hereford Cathedral.

The wellhead was restored in 1977 by the Hereford Civic Trust. It was rededicated by the Rt Reverend JRG Eastaugh, Bishop of Hereford, on St Ethelberts Day (20 May 1978). It is listed Grade II by English Heritage for its historical interest.

Unfortunately, the water supply seems to have dried up, perhaps after being disturbed by building works. So, today the holy well is simply a dry cast-iron bowl watched over by a weathered figure of the saintly king.

The well is extremely easy to reach on foot from the cathedral. There are no apparent signposts but it is a two-minute stroll from the east end of the cathedral precinct to Castle Hill.