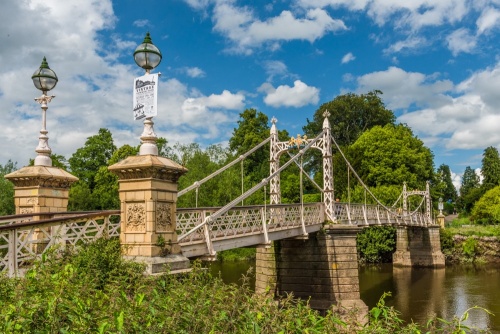 Victoria Bridge and the River Wye

Hereford has two beautifully-designed bridges over the River Wye. One is the Wye Bridge, which dates to the 15th century and was the major crossing point until the neighbouring modern road bridge was constructed to carry the A46. The other, lesser-known bridge was built in 1897 to mark Queen Victoria's Diamond Jubilee.

The Victoria Bridge is a wrought-iron suspension bridge linking the north bank of the River Wye near Castle Green with the Bishop's Meadow on the south bank. It was designed by John Parker and built by Findlay & Company of Motherwell to replace an earlier ferry. 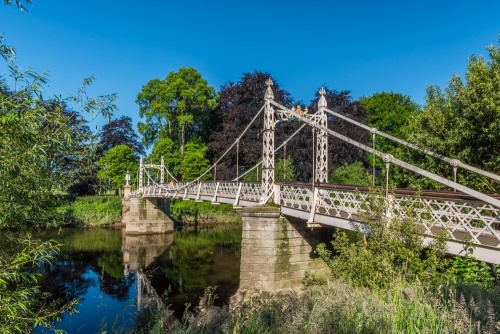 The bridge from the north bank

The design is simple; it consists of two stone piers supporting decorative steel towers. Cables link each tower to the river bank. A royal coat of arms decorates each tower and a second pair of royal arms are displayed on the central span. The central span is 110 feet long (about 33.5m). There are ashlar cutwaters n the upstream side.

Each end of the bridge has a pair of cast-iron lamp columns rising from terracotta piers. Each column supports a large circular glass light. 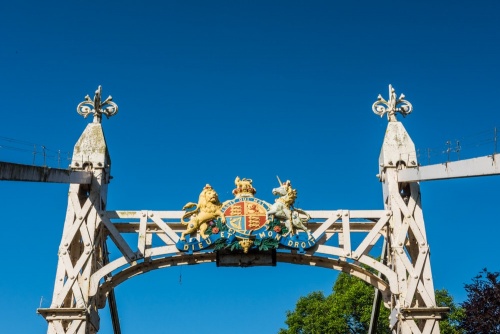 The central span coat of arms

The southern end of the bridge gives access to Bishop's Meadow, a public green space so-named because for centuries it was owned by the Bishops of Hereford. The bishops traditionally allowed the public free access to the fields south of the River Wye.

In the Victorian period, this tradition was formally recognised when the fields were officially given to the people of Hereford. a low stone memorial just south of the bridge commemorates this gift. 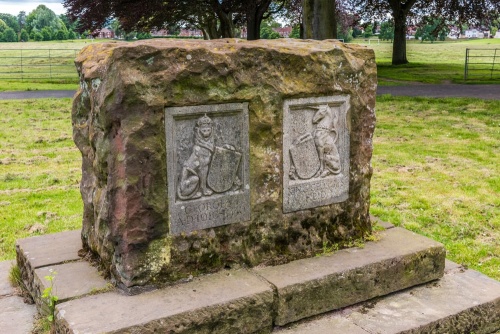 A pleasant footpath leads from Victoria Bridge along the south bank of the river to Wye Bridge. Along the way, it passes a small statue of a bulldog. A plaque set into the earth beneath the statue tells the story that the dog was owned by Dr George Robertson Sinclair, the organist of the Cathedral. Sinclair was a close friend of the composer Sir Edward Elgar.

One day in 1898 the friends were walking along the bank when Sinclair's dog fell into the river. Elgar incorporated the scene in his Variations on an Original Theme (commonly called 'Elgar's Variations'). 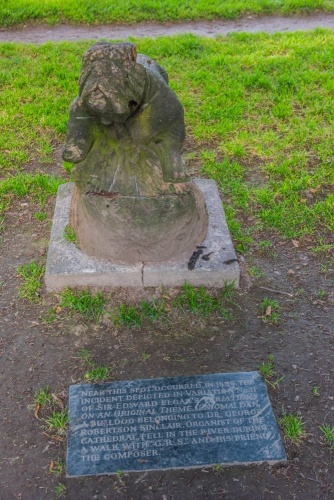 The Elgar bulldog sculpture and plaque

The Victoria Bridge is a beautiful example of Victorian engineering and design and is listed Grade II by English Heritage for its historical interest.

The Victoria Bridge can only be reached on foot. It is accessed by a footpath off the southern end of Mill Street, near Castle Green. It is roughly ten minutes on foot from the cathedral precinct.

About Victoria Bridge
Address: Off Mill Street, Hereford, Herefordshire, England
Attraction Type: Historic Building - Bridge
Location: Reached by a footpath off the southern end of Mill Street on the north bank of the River Wye, and by footpath from Bishop's Meadow on the south bank.
Website: Victoria Bridge
Location map
OS: SO512394
Photo Credit: David Ross and Britain Express

More self catering near Victoria Bridge