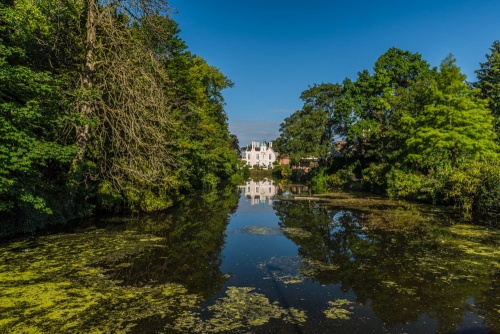 Very little remains of Hereford Castle, once an important medieval fortress and a vital part of Edward I's conquest of Wales. The former castle bailey is now Castle Green, a public park.

Only one section of the medieval moat that once surrounded the castle remains. This long, straight section of the moat is now Castle Pool, a canal-like waterway and duck pond that provides one of Hereford's iconic views.

Hereford Castle was begun sometime around 1050 by Ralph, Earl of Hereford. It was among the earliest castles in England. That first fortification was destroyed by the Welsh in 1055 and was rebuilt by the time of the Norman Conquest in 1066.

It was captured and recaptured several times during The Anarchy -- the Civil War between supporters of King Stephen and Queen Maud -- and used by Simon de Montford in the Second Barons' War (1264-1267). King Henry IV used Hereford Castle as a base for his forays into Wales during Owain Glyndwr's revolt (1400-1411).

The castle was destroyed following the English Civil War. The castle bailey became a public park, and the moat was filled in -- except for the straight section on the north of the castle. That section remained to become Castle Pool. 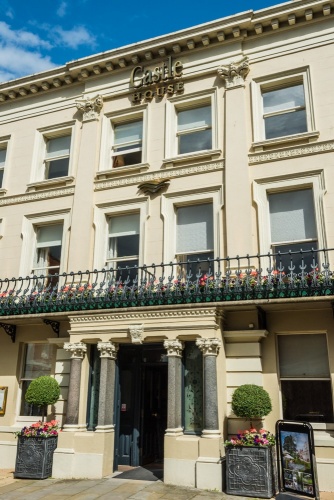 The classic view of Castle Pool looks west from Mill Street along the length of the pool to Castle House, a Grade II listed Georgian villa converted for use as a luxury hotel. This elegant building acts as a punctuation point to the long, straight waterway.

The villa dates to the early 18th century when a local entrepreneur built a pair of fashionable houses at the top of Castle Street. Over a century later in the middle of the Victorian period, the then-owner Frederick Boulton joined the two houses and added a new block to the rear facade.

The house served as a boarding house for a time but was converted into a hotel in the 1940s. It is probably the highest-profile luxury hotel in Hereford.

The best view of Castle Pool is from Mill Street, at the eastern end of the pool just north of Castle Green. The pool is not signposted, but is very easy to reach from Castle Green and is only a five-minute walk from the Cathedral precinct.