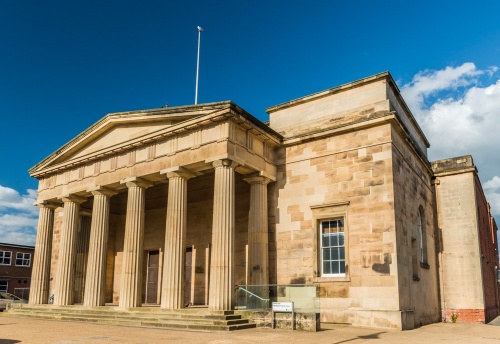 Hereford's elegant Shirehall was begun in 1815 to provide a combined space for civic administration and dispensing justice. It has, over the centuries, been used as the meeting place for the Herefordshire County Council and as the home of Hereford's Crown Court -- a function it still fulfils.

Creating the Shirehall needed an Act of Parliament (Local and Personal Act, 55 George III, c. ix). The act was duly passed in 1815 and was officially described as 'An Act for erecting a Shire Hall, Courts of Justice and other Buildings, for Public Purposes; and for providing suitable Accommodations for His Majesty's Justices of Assize, in and for the County of Hereford'. The site selected for the new building was the old gaol house.

The Shirehall design is often attributed to Sir Robert Smirke, one of the leading architects of Regency England. In fact, it was designed by Charles Heather, though Smirke did oversee Heather's work. The building took two years to complete and opened in 1817.

The striking front facade features a large Greek-style portico supported on six Doric columns, modelled on the Theseion in Athens. Side-wings flank the main block. At the back of the main building is a hall added in 1862.

In front of the entrance portico stands a statue of Sir George Cornewall Lewis (1806-1863). Sir George served as an MP for Herefordshire from 1847-1852 and for Radnorshire from 1855 until his death. He had a high political profile and was touted as the next head of the Liberal Party. There are also monuments to Lewis in Radnor and in Westminster Abbey. The statue stands on a high plinth inscribed with the words:

'A wise and honest statesman,
A profound scholar,
A kind and firm friend. 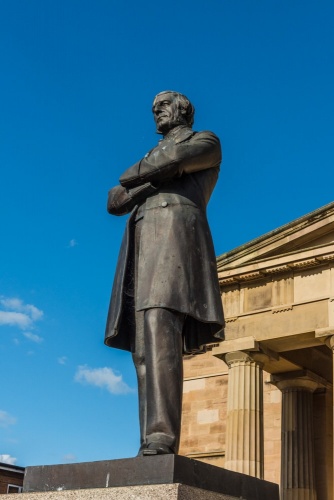 A further inscription on the south side of the plinth describes him as 'Chief Steward of the City'.

The Shirehall is not a tourist attraction but a working building. we've included it here because of its outstanding architectural value and its prominent place in the centre of Hereford.

More self catering near Shirehall

More bed and breakfasts near Shirehall