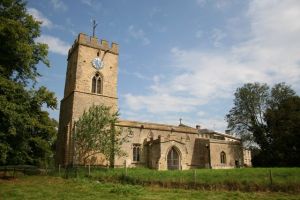 Cranford, St Andrew's Church
St Andrew's dates to the late 12th century. It was originally a parish church but was later made a chapel of ease to St John's, the other church in Cranford. To the 12th-century core was later added a 13th-century tower. The church is built of limestone rubble dressed with ironstone ashlar.

The church stands in the grounds of Cranford Hall and is reached by way of the drive to the Hall. Cranford Hall has been the home of the Robinson family for over 300 years. The building consists of a nave with north aisle, south porch, north transept, chancel with north and south chapels, and a west tower.

The north transept is the newest addition, added in 1847 to create space for the Robinson family pew. Memorials to generations of Robinsons can be found in the south chapel, and there are earlier brasses to members of the Fosbroke family, who held the Hall before the arrival of the Robinsons.

The oldest part of the interior is the Norman north arcade, which dates to about 1200. The rest of the fabric is primarily late 13th century.

The church is no longer used for regular worship and is in the care of the Churches Conservation Trust. As of this writing, the church is kept locked and the Trust advise ringing a keyholder to arrange a visit. See the Trust website for full details.