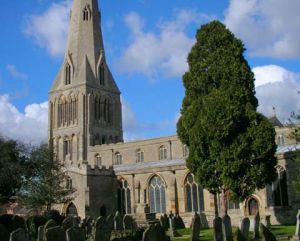 Raunds, St Peter's Church
St Peter's is a Perpendicular church with origins dating back to the 12th century. The church is built of limestone dressed with ashlar and is composed of an aisled nave, south porch, chancel, south chapel, west tower, and a very striking spire.

The highlight of St Peter's is a series of 15th-century wall paintings on the north wall of the nave. The main paintings include St Christopher, the Seven Deadly Sins, Three Living Three Dead, and a series depicting the life of St Catherine.

Perhaps the most fascinating of these is the depiction of the Seven Deadly Sins. This shows Pride being stabbed by Death's lance, while the other six deadly sins issue out of her sides.

There are further traces of a Rood scene over the chancel arch and other fragments throughout the church. The paintings probably date to about 1420, and they were covered with a lime putty during the Reformation, and only uncovered during restoration work on the church by Sir George Gilbert Scott in 1874.

The nave roof is a lovely piece of late 15th-century work, and there is an early 14th-century ram's head font. Note the long poles with hooks in the tower; these were used for pulling thatch off burning buildings.

In the chancel are a pair of memorial brasses. One is to John Tawyer (d. 1470) his wife Margaret, and their four daughters. The other shows a female of unknown name, with her four sons. The female's costume is very similar to the Tawyer bras, so we can probably assume that it is also of late 15th-century date.

Highlights of the exterior are the beautifully moulded and decorated west door, the south porch with a parvise over the entry arch, and the vestry doorway, dating to about 1270 and featuring lovely Early English ornamentation. In the churchyard stands a cross dating to about 1400, with carvings of the four apostles about the broken shaft.