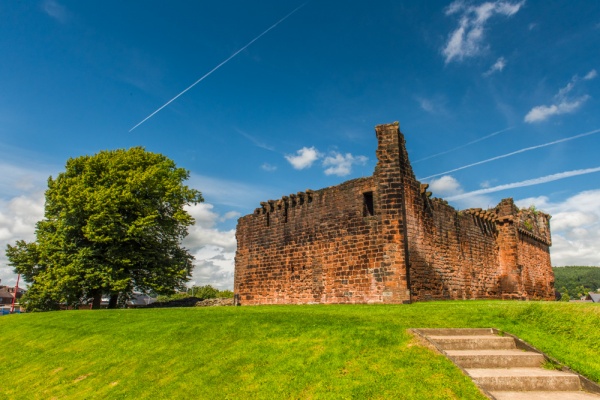 A ruined 14th-century castle of red sandstone, in the centre of Penrith. The castle was begun in the late 14th century by Ralph Neville, as a defence against Scottish raids. It was later expanded and strengthened by Richard, Duke of Gloucester (later Richard III) who created a sumptuous residence here.

The oldest part of the castle is a 14th-century pele, or fortified tower residence, possibly built by William Strickland, Bishop of Carlisle from 1400-1419 (which explains why Penrith Castle is also called Strickland's Tower). In 1379 Bishop Strickland obtained from the king a license to crenellate his pele, and in 1399 he obtained permission to enclose it in a barmkin, or curtain wall.

There is no certainty that the license to crenellate refers to Penrith Castle; it might equally refer to Hutton Hall, a 14th-century pele that stood near the parish church.

In the early 15th century, Richard III gave the manor of Penrith, including the entire town, to Ralph Neville, Earl of Westmorland. Neville strengthened the defences and began converting the castle buildings to stone. Neville served the crown as Warden of the West March, and part of his duties was to keep the border with Scotland safe.

Curiously, Neville did not build his stone fortification on the highest point of the hill. Instead, he chose the site of an old Roman fort, whose earthen banks and ditches could easily be reused to form the new castle defences. Neville's son Richard, 5th Earl of Salisbury, inherited Penrith in 1425 and built the Red Tower, whose striking remains can still be seen.

The 6th Earl of Salisbury was Richard Neville, known to history as 'The Kingmaker'. When the Earl died at the Battle of Barnet in 1471 Penrith Castle reverted to the crown. Edward IV gave the manor to his brother Richard, Duke of Gloucester.

Duke Richard also held the title of Sheriff of Cumberland. In that role, he stayed at Penrith Castle in 1471 and 1485. He remodelled the interior buildings to create a comfortable royal residence illuminated by large new windows and added a strong north gateway.

It did not long maintain its exalted state, however. After Richard's death, the castle was allowed to decay and was never again used as a permanent royal residence. By 1565 the castle was described as a ruin. During the Civil War, it was used by John Lambert, a Parliamentary general, as his headquarters. The castle was dismantled after the Civil War, and Strickland's Tower fell down (bit by bit) between 1739-1778.

Finally, in 1920 the castle site was cleared of farm buildings and a public park was laid out in the castle grounds.

The castle is surrounded by a dry moat, added in the late 15th century, measuring 15 metres wide and up to 6 metres deep.

The castle walls stand to their full height in several places, with easy access from the centre of Penrith, almost opposite the rail station.

The castle is signposted from nearby roads and is reached from Junction 40 on the M6. There is no dedicated parking area, and it's rather a challenge to find a good parking area close to Castle Park. We managed to find a place to park on a nearby residential street by sheer chance one time, and another time we parked at the shopping centre almost directly across the road. The simplest place to find parking is the paid parking area at the railway station, which faces the castle across Ullswater Road (A592).

The best-preserved part of the castle is the range of apartments built on the southeast side by Ralph Neville in the early 15th century. The walls still stand to their full height along this entire range, and make a very striking sight, especially when the sunlight hits the reddish stone. The other impressive feature is the vaulted undercroft of the Red Tower built by Ralph's son Richard Neville in the mid-15th century. 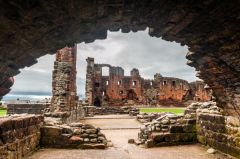 More self catering near Penrith Castle >>