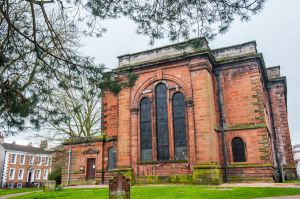 The parish church of St Andrews in Penrith is an intriguing mix of old and new. There was a church on this site as early as the 12th century, but that Norman building was largely rebuilt in 1720 by architect Nicholas Hawksmoor, who modelled his new creation on St Andrew's church in Holborn, London.

The oldest part of the current structure is the massive west tower, which dates in part to the 13th century. The thick walls and battlements of the tower suggest that it may have served a dual purpose as a pele, or fortified tower, used for defence against marauding Scots.

The interior is almost entirely neo-classical, with Tuscan style galleries lining three sides of the aisled nave, and a painted, coved ceiling. In the south aisle is a modern window called the Neville Window, created to show off two fragments of medieval glass traditionally said to represent the heads of Richard Plantagenet and Cecily Neville, and the bear and ragged staff emblem of Richard Neville, Earl of Warwick. Another theory is that the heads are those of Cecily Neville's parents, Ralf Neville and Joan Beaufort.

However, the most interesting historical features of St Andrew's are not to be found inside the church, but outside, in the graveyard. There you will find a pair of 10th-century cross shafts, carved with much-worn designs including an Agnus Dei, and figures of a man and woman. The design is similar to the famous cross at Gosforth, though here the effects of weathering are much more severe.

One of the crosses is traditionally said to have been erected by Owen Caesarius as a memorial to his father. Caesarius acted as King of Cumbria from AD 920 to 937.

Between the crosses are four hogback grave markers, said to represent four wild boars killed by the king in Inglewood Forest, not far from modern Penrith. Together this group of monuments is known as the Giant's Grave.

To the north-west is another 10th-century cross, known as the Giant's Thumb. This is slightly smaller than the others and has a wheel type head and carving of the interlace and scrollwork type.

We were a bit unfortunate when we visited because the church had to be closed unexpectedly due to repair work, but it is normally open daylight hours and visitors are welcome. Thankfully, the 10th-century crosses and Viking stones are in the churchyard, so they can be visited at any time, even if the church itself is closed. 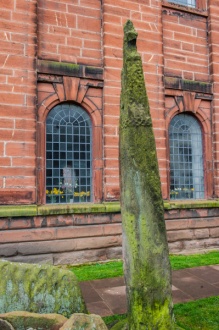 One of the 10th c crosses 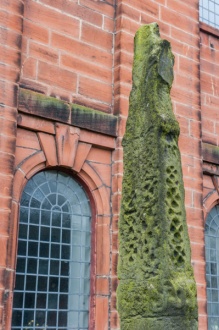 Top of a 10th-century cross 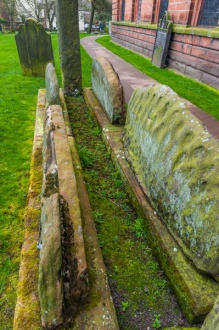 The hogback stones
from above 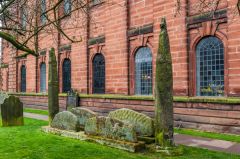 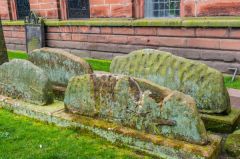 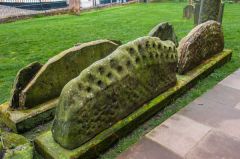 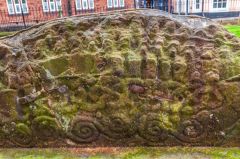