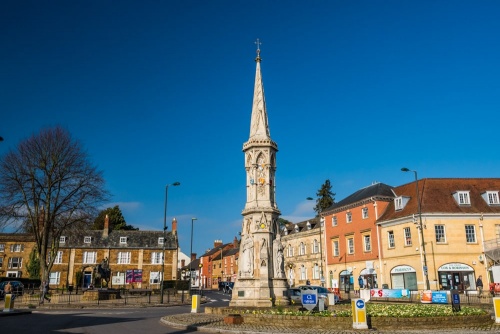 One of the most enduring nursery rhymes in English history is centred on the Oxfordshire town of Banbury. The rhyme, first published in 1784, is familiar to generations of children and adults.

Ride a cock horse to Banbury Cross
To see a fine lady on her white horse
With rings on her fingers and bells on her toes
She shall have music wherever she goes.

But which Banbury Cross does the rhyme refer to? 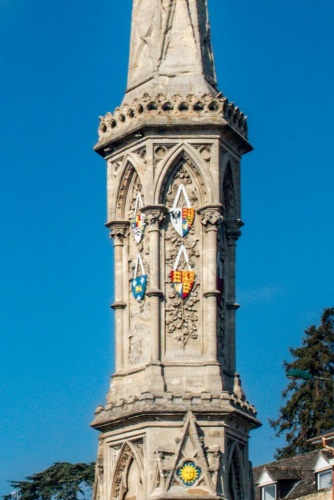 Medieval Banbury had three crosses; the White Cross stood at West Bar, while the Bread Cross stood at the meeting of Butchers Row and High Street. Finally, the Market Cross, also known as the High Cross, stood in the market place, near Cornhill. It seems logical that the rhyme referred to the High Cross.

The High Cross was first recorded in 1478. It stood 20 feet high and had a base with eight steps leading up to a stone column. The cross was the traditional focal point for public events and outdoor preaching.

All three crosses were pulled down in the year 1600 by Puritan iconoclasts who objected to their religious imagery.

When the High Cross was destroyed, one of the iconoclasts is said to have proclaimed, 'God be thanked, their god Dagon is fallen to the ground.' Presumably, 'Dagon' is a reference to the imagery on the cross, which suggests that the Puritans of Banbury were outraged by some of the carvings that decorated the cross.

The White Cross stood at the meeting of West Bar Street and Beargarden Road, at the entrance to the borough of Banbury. It was first recorded in 1554.

No trace remains of the three medieval crosses, but their probable locations are marked by plaques.

There is another possibility, though. Perhaps the Banbury Cross of the nursery rhyme does not refer to one of the three medieval crosses at all, but to a simple road crossing. Banbury stood at the meeting of two ancient roads; Banbury Lane and the Salt Way. 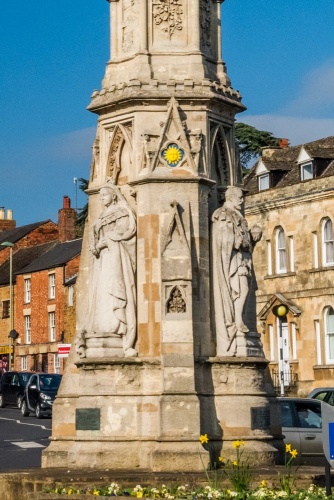 1914 statues on the cross base

In 1859 a new Banbury Cross was erected to commemorate the marriage of Princess Victoria, the eldest daughter of Queen Victoria and Prince Albert, to Prince Frederick William Louis of Prussia. The cross is inscribed with the town's motto, ‘Dominus nobis sol et scutum’ (The Lord is our Sun and Shield).

This elegant, slender cross rises 16 metres above ground level (roughly 52 feet). The central section of the cross is decorated with different versions of the Banbury coat of arms, representing different periods of the town's history. Above the town coat of arms are the personal coats of arms of people with close connections to Banbury.

The base of the cross has three statues depicting Queen Victoria, Edward VII, and George V. These were added in 1914 to celebrate George V's coronation, which took place three years earlier in 1911.

The cross resembles the 13th-century Eleanor Crosses erected by King Edward I in memory of his queen, Eleanor of Castile, who died in 1290. It originally had a small fountain, but this was later removed.

The cross stands in an isolated position on a traffic island at the meeting of Banbury High Street, South Bar (the A361), Horse Fair, and West Bar Street.

The 'cock horse' is usually thought to refer to a child's hobby horse, and no one is really sure who the 'fine lady' is. Theories as to her identity include Lady Godiva, Queen Guinevere, a Welsh horse goddess, and the 17th-century diarist Celia Fiennes.

A bronze statue of the Fine Lady stands at the junction of South Bar Street and West Bar Street, a stone's throw to the south-west of the cross. The statue was erected in 2005 and shows the Fine Lady as Queen of the May, with symbols of spring decorating the horse and rider. There is an information panel beside the statue explaining the history of Banbury Cross. 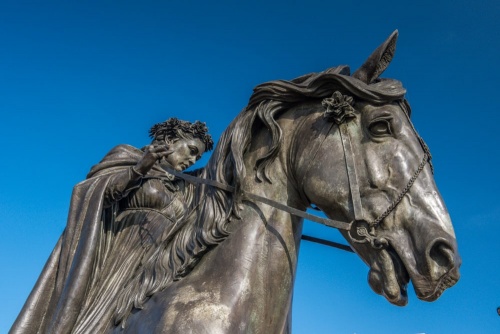 Banbury Cross stands at a busy roundabout, so your best bet if arriving by car is to park in one of the paid parking areas on South Bar Street or Horse Fair and follow one of the numerous pedestrian signs for the cross.

More self catering near Banbury Cross

The Granary at Fawsley - 12.2 miles
Daventry, Northamptonshire
Stay from: £50.00