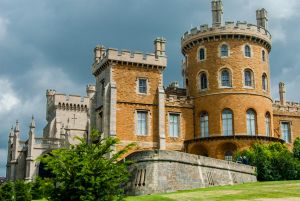 A romantic neo-Gothic colossus atop a rocky tor, begun in 1801 by James Wyatt for the 5th Duke of Rutland. When Wyatt died the bulk of the work was executed by the 5th Duchess and her chaplain, Sir John Thoroton. There is a fantastic painted ceiling, and a collection of paintings by Gainsborough, Holbein, and the ubiquitous Reynolds.
History
This high hill overlooking the Vale of Belvoir was first used by the Normans, who established a traditional motte and bailey castle enclosure on the hilltop. The estate has been the home of the Manners family, Earls (and later, Dukes) of Rutland since the Tudor era. The medieval castle was destroyed after the Civil War, and rebuilt in 1668 by John Webb to create a comfortable house within the old castle defences.

The castle suffered during the life of the 2nd Duke, who was given to drink and gambling. The house was allowed to decay to such a degree that in 1789 a visitor reported that it 'contained not a habitable room nor a bed fit to sleep in'. 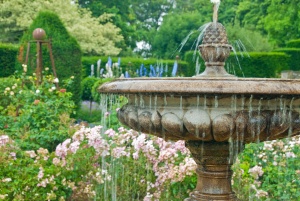 A formal garden fountain
All that changed when the 5th Duke and Duchess took control of Belvoir in the early 19th century. Together they set about re-making Belvoir Castle so that it would reflect the family's social standing and the ancient history of the house. They chose as their architect James Wyatt, then enjoying success as perhaps the most fashionable architect of his day.

Wyatt's rebuilding at Belvoir began in 1801, but so ambitious was the project that 15 years later only part of the house was complete. Then in 1816 a devastating fire destroyed much of Wyatt's interior work, and at the same time burned some 30 paintings, including works by Reynolds, Titian, and Van Dyck.

But the 5th Duchess was a determined character, and she was not about to be defeated in her ambitious attempts to transform her family home. Wyatt had died, so she enlisted her chaplain, Rev. Sir John Thoroton, to advise her, but in fact Duchess Elizabeth herself took control of the restoration and rebuilding work, though many of the initial designs were by Matthew Wyatt, son of James.

How did she do? Opinions differ widely; diarist Charles Greville called the result 'a sad mess'. I actually enjoyed the interiors greatly; they are perhaps eccentric, certainly unusual in places, but very personal and all the more enjoyable for that. Belvoir is mock-Gothic castle, very much a Regency vision of what a medieval castle 'ought to' look like, similar to Arundel Castle in Sussex. 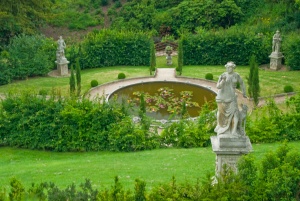 Formal garden below the house
The Duchess died in 1825, and the stately Elizabeth Saloon is decorated like a personal memorial, with a statue by Matthew Wyatt as the centrepiece The painted ceiling shows the Duke and Duchess surrounded by their children and symbolic classical allusions including gods, goddesses, and cherubic angels. Also appearing is a likeness of the Duke of York, said to be enamoured of Duchess Elizabeth. Other notable interiors are the Chinese Rooms, decorated with handmade silk wallpaper, and the picture gallery, with a portrait of Henry VIII by Hans Holbein. Here you will find a huge state bed, made for Queen Anne and brought here from Haddon Hall in Derbyshire, also owned by the Manners family.

The 5th Duke had a reputation for hospitality, inviting visitors to partake of lavish meals and sumptuous entertainment. He did not just lavish care on his exalted guests; for one birthday feast in 1834 he gave free meat and ale to all the villagers. Among the favoured guests was Benjamin Disraeli, the future Prime Minister and a political ally of the Duke's son and heir. Disraeli repaid his host by using Belvoir as inspiration for Beaumanoir in his novel Coningsby (1846). Disraeli described 'Beaumanoir' as full of flowers and comfortable chairs for relaxing.

Today Belvoir is maintained very much as a Victorian house, with a mix of rooms designed by Rev. Thoroton and the 5th Duchess contrasting with the surviving parts of James Wyatt's designs. The best preserved part of Wyatt's work is the Regent's Gallery. This stretches 40 metres (131 feet) and acts as a display area for a series of Gobelin tapestries once owned by Louis XIV of France. The tapestries tell the story of Dion Quixote, and were purchased by the 5th Duke in 1814.

There is much more to Belvoir than the castle itself; below the house, laid out in a series of terraced steps, are beautiful formal gardens dotted with classical statues and water features. A trail leads through woodland to the Duchess's Spring Garden, arranged in a del, and fed by underground springs, so there are plants in bloom throughout the year.

Visiting
We loved Belvoir. I should mention that the castle is very much a hilltop site, and the walk from the castle entrance can be steep, but there are shuttle buses if you don't fancy a walk. 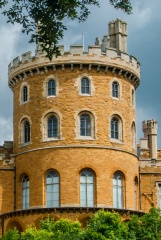 The castellated round tower 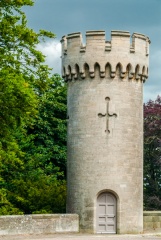 Mock tower beside the house 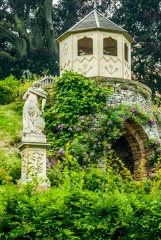 Summer house in the
Duchess's Garden

Garden: Formal Rose and Statue gardens lie close to the main house at Belvoir Castle. Further from the castle lie the Duchess's Spring gardens, begun in 1800. The gardens lie in a dell, or amphitheatre, with natural woodland springs providing year round garden colour. 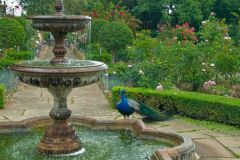 More self catering near Belvoir Castle >>