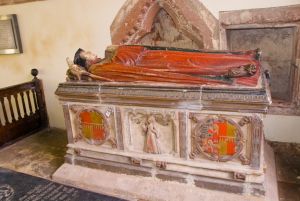 Wow! Now, here's a church with history! The Grade-I listed church of St Andrew's is built upon part of the former Roman town of Viroconium and incorporates Roman bricks and stones throughout.

The churchyard entrance is guarded by a pair of large Roman columns, and huge blocks of Roman stone are built into the nave walls. The large font is made from a reused capital of a Roman column which has been turned upside down and hollowed out to form the font bowl.

The church dates to the late Saxon period, but it has been altered many times over the centuries. It may have been built to serve as part of a college which began sometime before the Norman Conquest and was dissolved in 1347.

The church is oriented oddly, suggesting that is was constructed to stand parallel to the line of a Roman street. The nave was rebuilt in 1190, and the aisle and chapel date to 1200. The west tower was added in the 15th century and altered in the following century.

Much of the interior furnishings are Jacobean and Georgian, with some lovely Georgian box pews and communion rails, and a carved pulpit. Set into the south wall is a 4-foot long section of an 8th or 9th century Mercian cross shaft. The shaft is carved with interesting decorative vine scroll patterns and the tail of a creature that might be a giraffe.

The interior boasts some very nice monuments including an Elizabethan memorial to Sir Thomas Bromley, Lord Chief Justice of England, and his wife Mabel. Both are commemorated in beautifully detailed alabaster effigies. Standing opposite the tomb is a memorial to the couple's daughter Margaret with her husband Sir Richard Newport, who is dressed in full armour.

The town of Viroconium has been very well excavated and is open to visitors. The main entrance is just a short walk from the churchyard. A joint visit to Viroconium and St Andrew's church really serves as a fascinating reminder of the long history of settlement in this area of Shropshire. The church is no longer used for regular worship and is in the care of the Churches Conservation Trust.