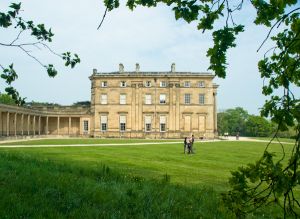 A magnificent 18th-century country house in classical style, Attingham Park is set in a wonderful parkland landscaped by Humphrey Repton. The house was built by George Steuart in 1785 for Lord Berwick, and the property remained in the Berwick family for eight generations.

In 1768 Noel Hill inherited the estate of Tern Hall. Hill was an MP, and a descendant of one of the most influential Lord Mayors of London, Sir Rowland Hill. In 1772 Noel Hill, later named Lord Berwick, decided that he needed a new house, one more in keeping with his status and his pretensions. He began building his new mansion - it cannot be called simply a 'house' - directly in front of Tern Hall. He came up with the name 'Attingham' by mangling the name of the nearby village of Atcham.

Hill's son Thomas inherited Atingham in 1789, but Thomas was a bit of a wastrel. He set off on a Grand Tour of Europe, acquiring fine art as he went. The art he collected needed a showpiece to display it, so he called in architect John Nash, a friend of the future Prince Regent, to design a Gallery. The money continued to flow through Thomas Hill's hands like it was water, and it was no surprise when he was eventually declared bankrupt. To pay the debts, the contents of Attingham Park went on sale at an auction in 1827.

Thomas Berwick's brother, a career diplomat, then filled the house with his own collection of fine art gathered during a posting in Italy. But when he died without an heir, the estate passed to his brother, a cleric, of whom it was said that he 'swallowed more wine than any man in the county'. It was left to his son, Rowland Noel-Hill, to finally put the estate in financial order once more. Rowland Noel-Hill also established a famous herd of Hereford cattle at Attingham.

The house is only two rooms deep, built with 11 bays on either side of a huge central portico, and everything is symmetrical, with matching wings. One wing is the 'male' wing, set aside for Lord Berwick, and the other side is the 'female' wing, reserved for his wife. Everything is for show, with little thought for comfort; Attingham was meant to be a stage, not a home.

Attingham features lush Regency interior rooms, with period furniture, artwork, and collections of silver. The ceilings are worth special note; they exhibit excellent plasterwork detail. Nash's Picture Gallery is the highlight; on the walls are many of the paintings sold at auction in 1827 and later reacquired.

But all is not luxury and ornate decoration; you can also go 'below stairs' and see how the servants lived and worked. There is a special room set aside for children's activities, where the younger generation can dress up in period costumes, learn Victorian parlour games, and experience a bit of what life was like at Attingham years ago. There are regular guided tours of the interiors, and also non-guided entry.

There are a number of enjoyable walks through the park, which extends for 500 acres, and takes in sections of the River Severn and River Tern. In the deer park, laid out by Humphrey Repton, is a classical bridge. All is serene and picturesque in the best 18th-century landscape garden style. And make no mistake, Attingham is all about style; about putting on a show, and this it does very, very well. 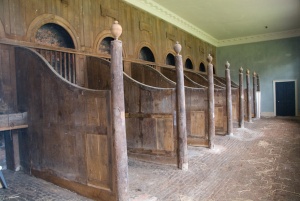 The rather stately stables 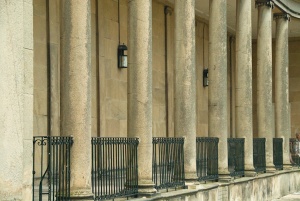 Classical columns on the imposing portico 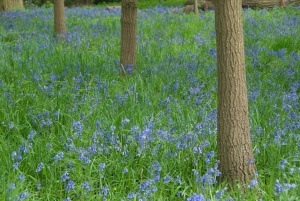 Bluebells on the woodland walk 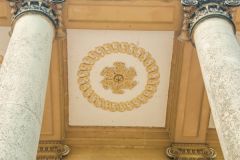 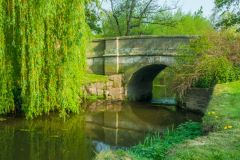 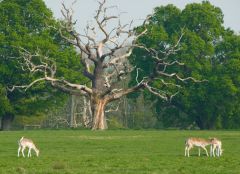 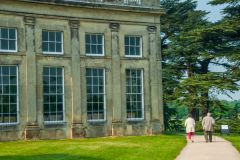 More self catering near Attingham Park >>