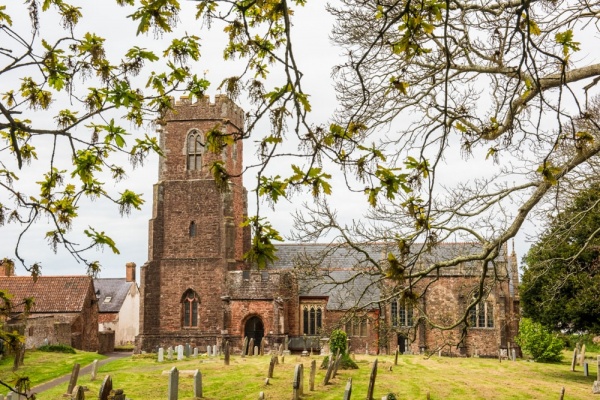 Stogumber is a lovely village in a quiet countryside setting between the Quantocks and the Brendon Hills in north-west Somerset. The first record of a church here comes from the early Norman period but the present building is 14th century. The earliest parts of the church are the tower and south porch, both constructed in the first half of the 14th century, before the coming of the Black Death. Both tower and porch are built of red sandstone and are decorated with battlements.

Most of the church apart from the porch and tower dates to around 1500, constructed in grey stone in Perpendicular style. In the tower is a ring of five bells, the oldest cast in 1624 and bearing the inscription 'When oie cale in God rejoice all'. On the tower is a clock installed in 1792.

As you walk around the church exterior look for two carved heads on the north porch. These are known locally as 'Adam and Eve'. The tower and south porch are adorned with gargoyles and grotesque carvings of beasts known in Somerset as 'hunky punks'. In the churchyard is a preaching cross with a medieval base and shaft and a Victorian cross-head.

One final feature outside the church is worth mentioning; near the south porch is an open expanse of grass in a rough triangle. This area is said to mark the site of a common grave where victims of a plague are buried. 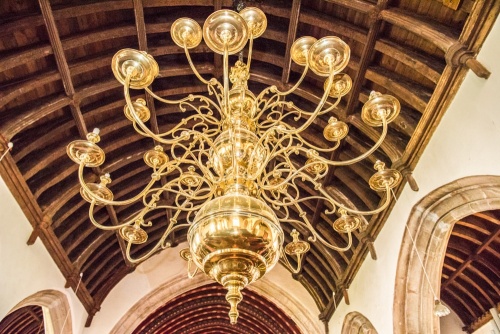 At the east end of the south aisle is the Sydenham Chapel, begun as a chantry chapel for the lords of the manor at Combe Sydenham. The most striking memorial in the chapel is that of Sir George Sydenham (d 1597), whose daughter Elizabeth married Sir Francis Drake. Though the Sydenham family worshipped here, the Drake marriage took place at Monksilver church, which is closer to Combe Sydenham Hall.

Sir George's tomb separates the chapel from the chancel. It is an extraordinary memorial, with an ornate canopy supported on pairs of neoclassical columns linked by coffered vaults.

Sir George's effigy lies on a tomb table, his figure stretching through a screen dividing the tomb in two. The effect is bizarre, and has been compared to a magician's assistant about to be sawn in half. Sir George is flanked by his two wives, tucked under the edge of the tomb table. It is clearly his monument, not theirs. At Sir George's feet are figures of three babies and a nurse. On the tomb base is a cartouche with Sir George's name misspelled as 'Sr. Gorge Sidnum' and the date of his death missing.

Almost forgotten beside the splendour of Sir George's tomb is a memorial to George Musgrave (d 1742) carved by John Rysbrack, a popular Flemish sculptor whose bust of Lord Orkney is on display at the Victoria and Albert Museum in London.

St Mary's was transformed in the late Victorian period by Prebendary Edward Jones, a follower of William Morris who had the church altered in Arts and Crafts style with stencilled walls, floor tiles in the chancel, and a painted wagon roof. The Victorian alterations are vividly coloured and create a contrast to the earlier medieval stonework and plain furnishings. 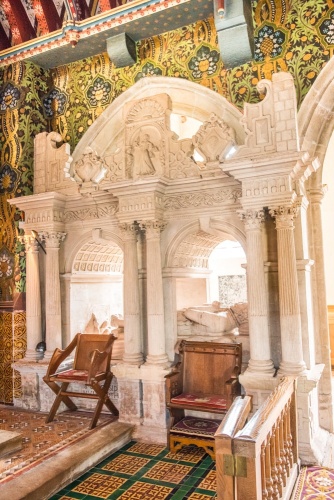 Near the organ is the parish bier, a wooden hand cart used to carry coffins of poor parishioners to the churchyard for burial. In the window beside the organ are three roundels of Flemish glass. Most of the other stained glass windows are Victorian, given by the Roecliffe family.

One highlight is a chandelier made by Thomas Bayley of Bridgewater in 1770. Bayley made ornate chandeliers for several other local churches including Old Cleeve, near Washford. The chandelier was discovered in 1907 in the Vicarage Brew House where it had lain forgotten for 35 years.

The octagonal font is 15th century, with quatrefoil decoration on the side panels and a 19th-century wooden cover. The pulpit is one of just two stone pulpits in Somerset.

The bench ends in the nave are 16th century and finely carved, though perhaps lacking some of the detail of other Somerset churches. Each bench end is carved with a unique pattern, most of them simple tracery designs. Near the west end of the nave is a bench end bearing the coat of arms of the Trevelyan family, owners of Nettlecombe Court. Look for the family motto, TYME TRYETH TROTH. 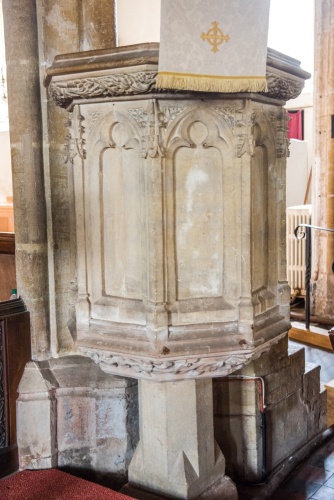 Under the tower is a poignant memorial to Thomas Rich, the squire of Hartrow, who died in 1727 at the age of 24. The memorial was given by Margaret Hay, who was engaged to marry Rich before his untimely death at a young age. Luckily for her, Rich had altered his will before his death, making her his heiress.

You can still see the original door to the rood stairs, which retains its medieval ironwork and carvings of foliage. The upper roods door is constructed with pieces of panelling from the medieval rood screen.

The north aisle arcade is outstanding, with finely carved capitals, each unique. One capital is carved with the Instruments of the Passion. Two pillars at the east end of the aisle are pierced by hagioscopes, allowing worshippers in the aisle to view the high altar during services. Double hagioscopes like this are extremely rare. One is carved with the likeness of a Green Man, the pagan symbol of fertility.

St Mary's is a delight to visit; the peaceful location is idyllic, and there are a wealth of historical features to enjoy. The combination of the Sydenham tomb, the stone pulpit, and the outstanding Georgian chandelier makes a visit to St Mary's a delight. The church was open when we visited. 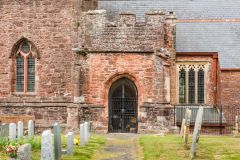 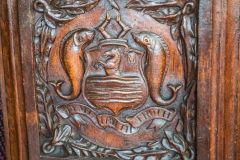 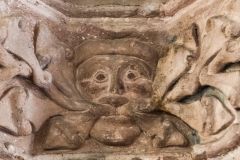