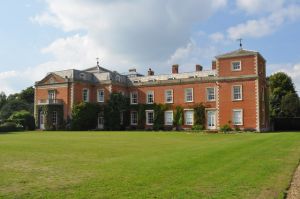 Euston Hall
Euston Hall is a red-brick Georgian country house, the home of the Duke of Grafton. The house that we see today is only a wing of a much larger house which was destroyed in a devastating fire in 1902.

The house contains a superb collection of Stuart royal portraits, a reminder that the Dukes are descended from Charles II, as well as paintings of notable people in the Stuart court. Among the artists displayed are Lely, Van Dyck, and George Stubbs.

The interior features collections of fine art from Arlington House in London. The mansion stands in grounds landscaped by William Kent and John Evelyn, with the addition of man-made lakes designed by Capability Brown.

Within the landscape garden are classical follies, including an octagonal temple - the last work designed by William Kent before his death - as well as a more functional restored 17th-century watermill.

Nearby stands the local parish church of St Genevieve, with a very Carolean design in the style of Christopher Wren. The church was called by diarist John Evelyn 'one of the prettiest in England', and features memorials to FitzRoy family members, and woodwork by Grinling Gibbons.

Euston Hall has been home to the Dukes for over 300 years, but the history of the estate goes back to at least the 11th century, at which time it was owned by the powerful abbey of Bury St Edmunds. The manor welcomed Elizabeth I in 1578, but by the time of the Restoration, it had lapsed into a state of decay.

In 1666 the estate was purchased by Henry Bennet, Earl of Arlington. The Earl embarked on an ambitious programme to create a grand mansion in the then-fashionable French style.

About 1750 the 2nd Duke of Grafton, grandson of the Earl, hired Matthew Brettingham to remodel the house. Brettingham replaced the earlier domed roof with low, pyramid-shaped roofs, and refaced some of the earlier building.

This 18th-century house was essentially unchanged until the disastrous fire of 1902. The south and west wings were destroyed. Though the house was rebuilt on the same plan, the new building proved too difficult to maintain and the new sections were pulled down in 1952, leaving us with the house that we see today.

All proceeds from visits to Euston Hall go to local charities.

More self catering near Euston Hall >>