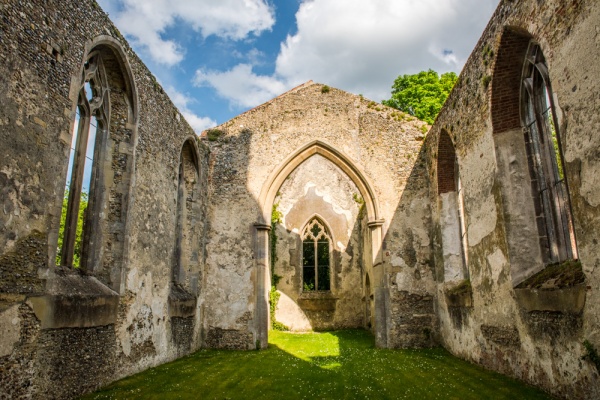 Inside the ruined church of St John, Stanton

The once fine church of St John the Baptist at Stanton now consists of nothing more than the lofty tower, while the nave and chancel stand roofless and open to the elements.

The best feature of the church are the 14th-century windows, which show off delicate Decorated tracery. The tower is a strong, sturdy structure, rising in three stages to an embattled top. The church is no longer in regular use and is in the care of the Churches Conservation Trust. The ruins of the nave and chancel are always open for visitors to explore. 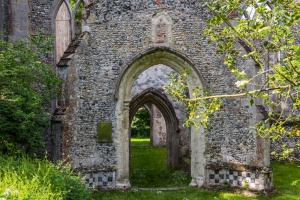 There are two churches in the village of Stanton, just as there were in the Domesday Book of 1068. Don't make the same mistake that I did and assume that the church tower you see while nearing Stanton is St John's; it is in fact, All Saints church, which is also well worth visiting. St John's is not immediately obvious, and it really helps if you have an Ordnance Survey map to discover the church's location.

The official postcode is IP31 2ED, but that's misleading; it leads satnavs to a house near the centre of the village. St John's is actually located on the opposite side of the A143 from the village, and the closest postcode is probably IP31 2EA. There is no easy way to access the church, which is located between Bardwell Road and Barningham Road (the B111).

There is no parking area. The best way we found (by complete accident) is to pull into a layby on the Barningham Road, just off the A143. From there a footpath leads through woods and emerges in the overgrown graveyard.

St John's probably stands on the site of a late Saxon or early Norman building, as does All Saints in Stanton itself. All Saints served the villagers while St John's served the scattered farms to the north of the village. The church was recorded as 'in very bad repair' as early as 1812. Services were held until 1962 when the roof was finally removed.

Highlights include the 14th-century tower, made of flint with limestone quoins for the doors and windows. The parapet is a lovely example of East Anglian flushwork, built with stone, brick, and flint. On the north side of the roofless nave are two 14th-century window openings.

The porch is 15th century, made with a chequerboard pattern of knapped flint. The large east window is 14th century. The chancel has a crow-stepped gable dating to 1616. Crowstepped gables were common in 17th-century houses but are not common in churches.

St John's is a very atmospheric church and creates quite a contrast with the 'active' church of All Saints in the village itself. 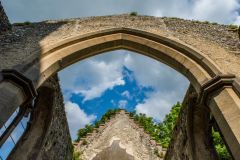 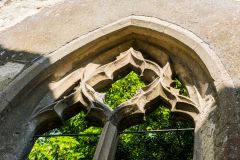 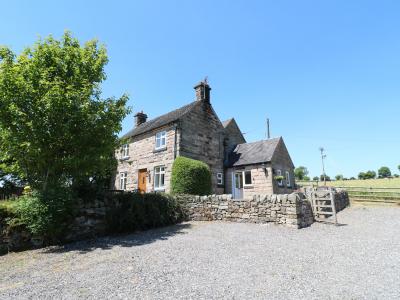 This detached, traditional cottage is in the hamlet of Stanton near Ashbourne, and can sleep five people in three bedrooms.
Sleeps 5 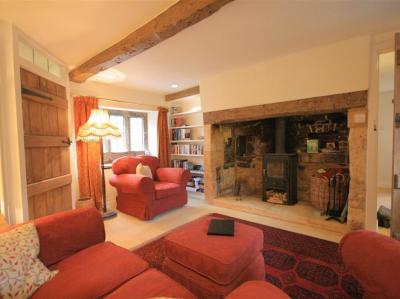 This cosy country cottage is in Stanton, Worcestershire and can sleep four people in two bedrooms.
Sleeps 4