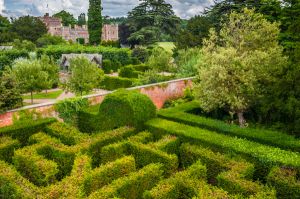 When Henry IV's cousin, Margaret Fitzalan, daughter of the Earl of Arundel, married Sir Rowland Lenhtall the king gave the estate to the new couple. Lenthall was something of a royal favourite, having fought for Henry at the Battle of Agincourt in 1415. Sometime around 1427 Lenthall began to build a new manor house on his property, and in 1434 he was granted a license to crenellate the manor by Henry's grandson, Henry VI.

Sir Rowland's great-grandson sold Hampton to Sir Humphrey Coningsby in 1510, and it remained in the Coningsby family for four centuries. A later Lord Coningsby was a key supporter of William and Mary's bid for the throne, and showed his support by adding 'Court' to his manor's name, in honour of Hampton Court Palace outside London, one of the new monarchs' favourite royal residences. Coningsby established Dutch-style parterre gardens and canals at Hampton, following the popular fashion for all things Dutch after William and Mary's ascent to the throne. 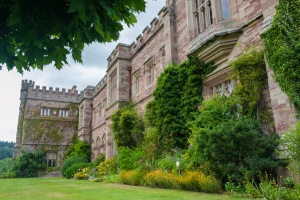 The rear of the castle

When the Coningsby's finally sold Hampton it was to Richard Arkwright, son of the inventor of the same name. At the time Richard Arkwright was reckoned the wealthiest commoner in England, a testament to his father's success in the cotton industry. The purchase price was over £220,000, a vast sum, roughly equivalent to over £6 million today. Simon Jenkins, in his popular book 'England's Thousand Best Houses', calls it the most costly house purchase in 19th century England.

Richard's son and heir, John Arkwright had the house rebuilt in early Victorian Gothic style to designs by Charles Tracy (later Lord Sudeley). The most obvious addition to the house were striking battlements, truly giving it the look of a medieval castle.

However, relations between architect Tracy and owner John Arkwright were strained at best, and at one point Arkwright claimed in a fit of exasperation that he wished he had 'never touched a stone' of Hampton. Perhaps it would have been better if he hadn't, for the cost was enormous, and by the turn of the 20th century Arkwright's son was bankrupt.

But we're getting ahead of ourselves. In 1848 the family called in Joseph Paxton to design an ornate conservatory behind the house (now used as a cafe). Paxton went on to design the famous glass hall for the Great Exhibition of 1851, using many of the same principles employed at Hampton Court. 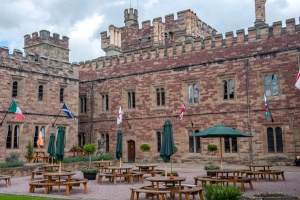 The Arkwright family owned the estate until 1912, but by then it was falling into disrepair and they had no money to stave off the decay of time. Paxton's greenhouse was falling apart, and the 17th-century gardens were unkempt and overgrown.

Rescue came in 1994 when Americans Robert and Judith Van Kampen purchased the estate and set about restoring the historic gardens and house interiors. Though the interiors are much altered, they present a fascinating look at how a historic property changes over time.

Visits are by guided tour only, and visit several key rooms, including the Coningsby Great Hall, the social centre of manorial life. You can see the original family chapel, library, ballroom, and a series of state bedrooms.

The gardens at Hampton Court represent one of the most ambitious modern garden projects anywhere in England. The core of the gardens is encircled by the original Victorian garden walls. Within the walls, you will find a wide variety of distinct garden areas, separated by canals, islands, and avenues of pleached trees.

Then there are a recreated area of Dutch parterres and canals with island pavillions creating wonderful focal points. There is a wonderful wisteria tunnel, over 150 years old, leading through hedges to wide lawns in front of the house. 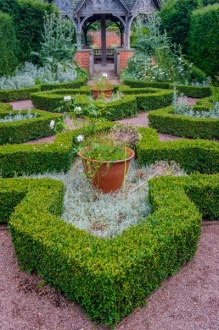 One of the most popular features is a large yew maze, made up of over 1000 individual yew trees. A mock-Gothic tower stands at the centre of the maze and offers wonderful views from the top. From the base of the tower and underground passage leads to a sheltered grotto, where a quiet waterfall spills into a quiet pool, surrounded by a sunken garden. The effect is utterly magical. In addition, there are wide lawns near the house, colourful herbaceous borders, extensive riverside walks, and much more to enjoy.

There is a separate kitchen garden which provides organic produce for the castle restaurant. One nice feature during the summer months is that the head gardener is available at set times to answer any gardening questions you might have.

Many people come to Hampton purely to enjoy the garden. After I visited it was easy to see why. I was especially keen on the house, but the garden proved to be an absolute delight. The Dutch-style water gardens were wonderfully attractive, and overall there was a perfect mix of formal and informal garden areas, with plenty of space for children to run about and lots of quiet corners for adults to enjoy at a slightly slower pace! The colours in summer when we visited were simply stunning.

As you might expect, the maze was especially popular with children, though it seemed when I was there that at least as many adults were trying their hand at finding a way to the centre as there were children! And it is worth it; the view from the top of the tower is wonderful, with an excellent panorama over the walled and water gardens to the towers of the castle itself. 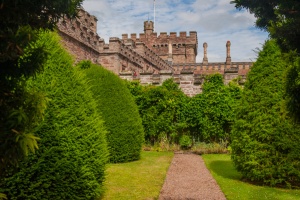 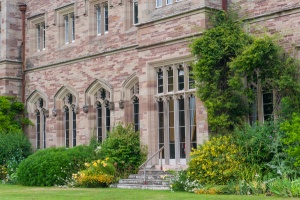 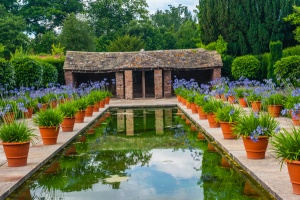 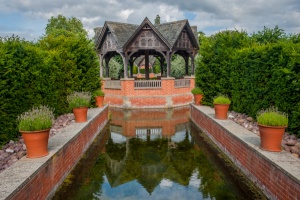 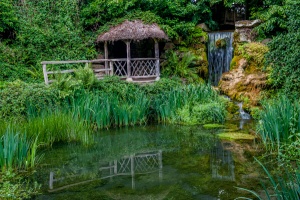 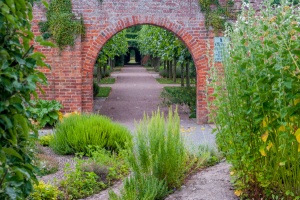 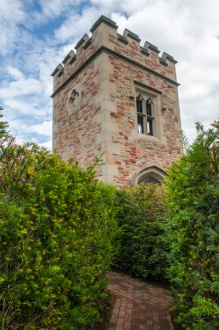 The Gothic Tower and yew maze The Lamb Inn is a traditional, detached holiday home resting in Stoke Prior near Leominster, Herefordshire and can sleep 12 guests in five bedrooms.
Sleeps 12 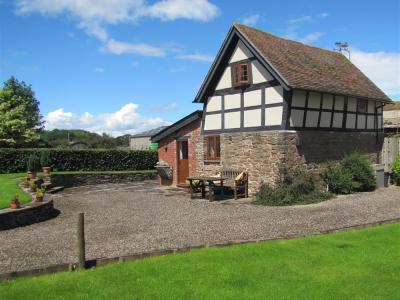 This one bedroomed cottage in Bromyard sleeps two and has one bathroom.
Sleeps 2