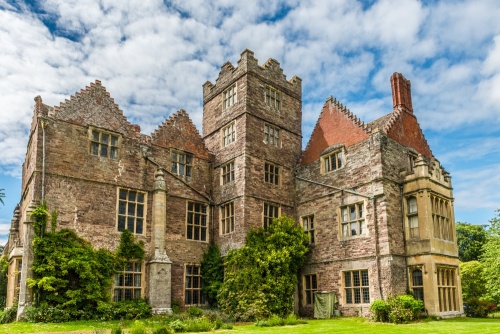 Kinnersley Castle
Kinnersley Castle began as a Norman fortress, one of many erected in the troubled Welsh Marches region during the Norman period. That early Norman castle was built by the Kynardersley family and was later rebuilt as a beautiful Tudor manor house, home of the powerful Vaughan family.

It was Roger Vaughan who rebuilt the Norman castle, over the years 1585 - 1601. The most notable features of the castle exterior are the steep, stepped gables, a vestige of Dutch style.

Simon Jenkins, author of the popular book 'England's Thousand Best Houses', called Kinnersley Castle 'as architecturally important as Buckingham Palace'. It's a bold claim, but one that you can understand when you explore the rambling, historic building. Much of the castle we see today dates from the Jacobean period, though large portions of the medieval structure remain.

Among the most interesting owners of Kinnersley Castle was Richard de la Bere, who married Sybil De Kynardsley, the heiress of Kinnersley. The couple inherited in the castle in 1340 and immediately obtained a license to hold a market and annual fair. 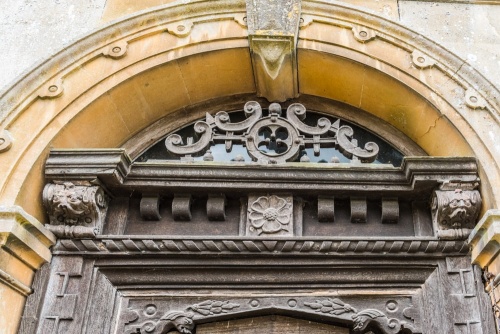 Richard fought with the Black Prince at the Battle of Crecy in 1346 where he was credited with saving the Prince's life. He was rewarded with a knighthood and became 'the Prince’s Bachelor, and Constable and Keeper of the Prince's Castle and Lordship of Emlyn'. He was later named the Sheriff of Herefordshire.

You can see the family memorial in Hereford Cathedral.

Other owners included Francis Stallman. He and his eldest son were both killed in the Civil War. Then there was Sir Thomas Morgan, who served as the Governor of Jersey in 1660, and whose monument stands in the neighbouring parish church of St James.

During the Victorian period, the house was owned by the Reavely family. Mina Reavely married the famous architect GF Bodley, who restored the church. Both are buried in the churchyard. A later owner was Major Davey, who invented the Davy Fire Escape (also known as the 'Davy Descender'). During WWII the Nazi sympathiser Ronald Nall-Cain, 2nd Baron Brocket, was held under house arrest for a brief period at Kinnersley Castle.

The castle was in a state of decay in 1954 and was threatened with demolition when it was purchased by the Garrat-Adams family. It was gradually restored over the course of several decades and is still very much a family home. 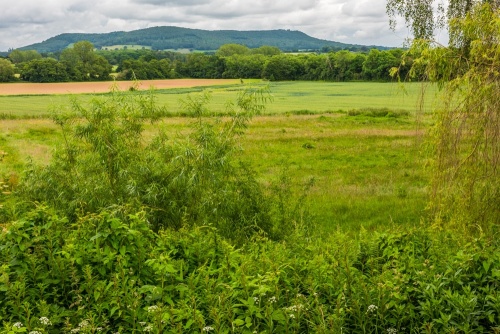 Looking over the former castle moat

The interior of the castle features some very fine plasterwork ceilings and oak panelled chambers. Perhaps the finest room is the solar, or private family apartment, which features an ornate 1588 gilded plasterwork ceiling. Remarkably, the roof tiles are original and rest on Elizabethan split-oak lathes.

The castle stands in 8 acres of gardens, featuring yew hedges, and one of the largest Ginkgo Bolioba trees in England, plus a walled kitchen garden. The original Castle gardens were laid out by the famous 18th-century landscape gardener Humphry Repton.

Little remains of the gardens today and most of the surrounding parkland was sold off over the centuries. You can look out over the field below the house and trace the line of the medieval castle moat, now filled in.

Beside the castle is the Norman parish church, which is well worth a visit to see the Smallman monument of 1633.

The castle is open for guided tours on specific days during the summer months. We were fortunate enough to take one of these tours, led by the house owner, and it was fascinating to hear her talk about growing up in the castle and how her parents struggled to find the money to restore it.

The tour took in the medieval core of the building and the best Jacobean rooms, including the hall and the solar with its outstanding plasterwork.

Kinnersley Castle is not an opulent stately home, but a beautiful historic house and family home. It is fascinating to see how the house evolved over the centuries as it passed from one family to the next. Kinnersley Castle is a delight to explore. Highly recommended.

More self catering near Kinnersley Castle >>

The Agent's House Bed And Breakfast - 5 miles
Hereford, Herefordshire
From: £70.00