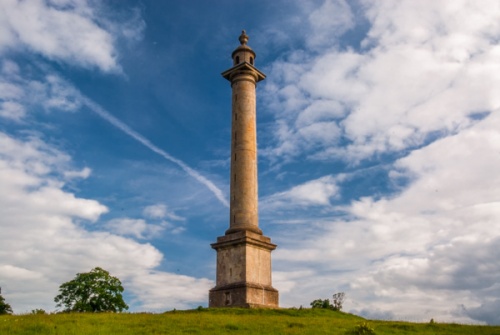 High above the village of Curry Rivel stands a tall column, dedicated to the memory of Sir William Pynsent. Pynsent was a highly successful businessman in the thriving Somerset cider trade.

When the government of the day was considering taxing cider more heavily, William Pitt the Elder came out strongly against the proposals. Sir William Pynsent was so grateful for Pitt's support that he changed his will, and left the Burton Pynsent estate to Pitt.

When Pynsent died in 1765, his relatives were shocked to find they had been left with only a thousand guineas each. They contested the will, but the challenge was unsuccessful, and Pitt became the new owner of the Burton Pynsent estate.

Pitt commissioned Capability Brown to design the monument to remember Pynsent (and, no doubt, to remember his wealth!). The monument was constructed by Philip Pear, a builder from Curry Rivel.

The monument rises to a height of 140 feet and was finished in 1768 at a cost of 2000 pounds, a considerable sum for the time. It is composed of a rectangular plinth upon which is a round column topped by a viewing platform, itself surmounted by an urn. The viewing platform is no longer accessible, due, legend tells us, to an unfortunate incident with a cow.

The story goes that a cow managed to ascend the stairs to the top, but, being unable to back down the stairs once it had reached the top, the poor creature fell to its death from the pinnacle. To prevent further bovine accidents, or, indeed, any human attempts to imitate the poor cow, the stairs were closed.

The story may seem a bit farfetched, but we've been contacted by a reader who met the slaughterman involved in butchering the cow, who told him that only one shoulder of meat was unusable despite the impact of the fall from the top of the monument.

Even though you can't climb the column, the hill offers very pleasing views out over West Sedge Moor towards Taunton.

The Burton-Pynsent Monument is known by a number of other names, including the Curry Rivel Column, the Pynsent Steeple, and the Cider Monument.

Thee is a public footpath past the column, though this can be a little tricky to find. A good OS map is a handy resource for getting onto the right path from Curry Rivel village. The path heads left off Heale Lane a few hundred yards up from the A378. 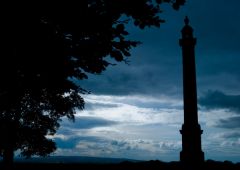 Self Catering near Curry Rivel