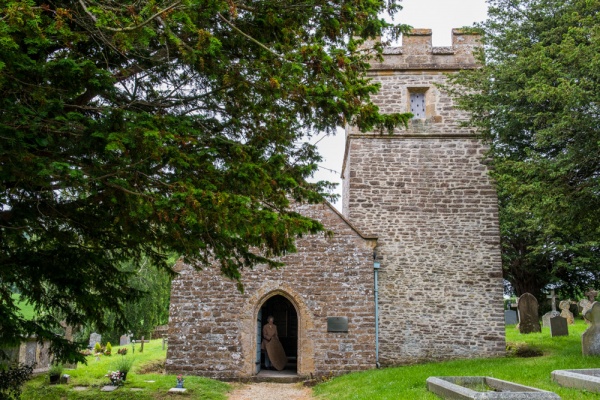 A country church, yet close to Bridport, Holy Trinity has its roots firmly in the medieval period. There are two churches in Bothenhampton; this is the Old Church, which fell out of use after a new church was built by ES Prior in 1889. Indeed, for a short time, the chancel of the old church was used as a mortuary chapel.

The Old Church features a 13th-century chancel and 15th-century tower, with Georgian additions including an imposing reredos and associated communion rails, designed as a single piece. There is no nave; it was destroyed long ago, leaving just the tower and chancel. 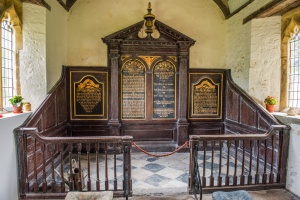 In the 13th century, a priory was established in Loders, a parish quite close to Bothenhampton. The priory belonged to the Abbey of St Mary at Montburgh in Normandy. The Montburgh priory owned estates in the Loders area, including the manor of Bothenhampton.

The monks founded a chapel here sometime during the 13th century. The only remnant of this first chapel is the font, with its circular bowl and splayed underside.

Then in 1414 alien priories (monasteries administered from abroad) were abolished, and Bothenhampton was granted to the nunnery at Syon, near London.

The chancel at Bothenhampton was rebuilt before this date, probably in the 14th century, and the tower arch is also 14th century.

The status of Holy Trinity as a fully-fledged church seems to have been in doubt, for births and deaths were recorded at Loder as late as 1733. By the 1880s the medieval chapel was considered too small to meet the needs of the population and a new church was built on the western edge of the village, off Hollow Way. The new church was designed by ES Prior in Arts and Crafts style and is well worth a visit.

Most of the Old Church was pulled down when the new church was built, leaving only the chancel, tower, and part of the nave wall. The chancel was used for a time as a mortuary chapel but was finally declared redundant in 1971 and passed to the care of the Churches Conservation Trust.

By far the most interesting feature is the reredos, dado, and altar rails, which were designed as a single piece in the early 18th century. The reredos bears painted versions of the Lord's Prayer, Creed, and the Ten Commandments. The floor of the sanctuary beneath the reredos is paved with marble and grey slate. Under the tower is the simple medieval font, standing on an octagonal pedestal.

Do take some time to explore the churchyard. There are several 18th-century tomb chests and some interesting gravestones, including several bearing symbols of sailors and others with the weeping willow motif, a device that was very popular during the 19th century. One such gravestone near the churchyard entrance tells a sad tale of a mariner named Thomas Roots Jarvis. It reads:

He sunk no human power his life could save
No hand could snatch him fro his watery grave
A grave indeed he little thought to find
When England and his friends he left behind.

Bothenhampton village is signposted off the A35 just southwest of Bridport. Follow Hollow Way past the Victorian church, and stay straight ahead as the road becomes Main Street. Branch left onto Old Church Road and climb the steep hill to the Old Church at the top of the hill. There is no parking at the church itself, so you'll need to find space along Old Church Road, which can be crowded.

When I arrived a lovely elderly couple was just beginning to clean the church. They told me that they had started to come every few weeks just so visitors would find Holy Trinity clean and attractive. They brought fresh flowers from their own garden, swept and dusted the church, and generally tidied everything up.

And no one knew. They never told the Churches Conservation Trust what they were doing, they just showed up because they wanted visitors to enjoy their local church. And they were two of the loveliest people you could imagine. They even found church brochures for me, hidden in a box under a side table in the chancel.

It will not take long to explore the church; because it is just a cut-down version of the original building there is less to see than in a full-sized medieval church. But don't let that put you off; the Georgian reredos is simply wonderful, a perfect example of the kind of furnishings that are found in so many 18th-century churches. 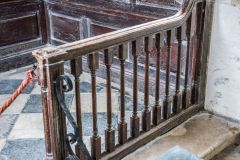 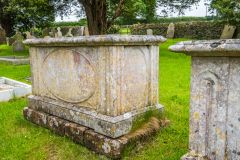