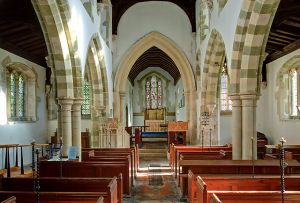 The interior features several notable monuments to members of the Bowle family. Among these is a memorial to a former vicar named John Bowle (d. 1788). Bowle was saddled with the nickname Don Bowle, after being responsible for editing an annotated edition of Cervantes' Don Quixote. An earlier memorial worth noting is that of Giles Rowbach, dated 1633.

The chancel is 13th century boasts a piscina of the same age in the south wall. The aisles are 14th century, separated from the nave by beautifully carved arcades in Decorated Gothic style. The nave features 37 stone corbels, each one unique, thought to have been modelled after local villagers. Many of the corbels show different 14th-century clothing and headwear.

The octagonal font is 14th century, made of Purbeck marble and supported by a central stem. There is a ring of four bells in the tower, the oldest of which was cast in 1661.

The church was heavily restored by JL Pearson in 1865. The timber spire, built in 1600, fell down during restoration work in 1866 and was replaced with a shingled one. Reports tell us that the new spire was built on the ground and raised into position by cables linked to steam engines on the nearby hillsides.

All Saints is seldom used for worship and is cared for by the Churches Conservation Trust. The church is usually open daily to visitors. See the Trust website for current details.

More self catering near Idmiston, All Saints Church >>

The Stonehenge Inn and Carvery - 5.2 miles
Durrington, Wiltshire
From: £40.00

More bed and breakfasts near Idmiston, All Saints Church >>