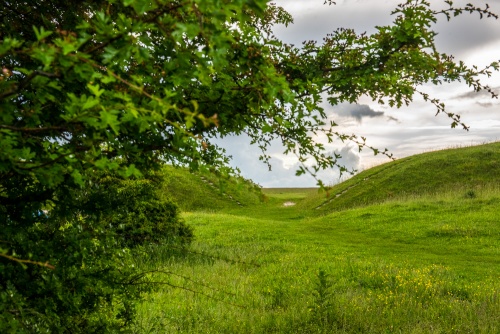 Figsbury Ring is two ancient sites in one, with a Neolithic enclosure, or henge, inside the earthworks of a later Iron Age hill fort. Figsbury occupies the open top of a hill a few miles east of Salisbury, with fabulous views over Salisbury Plain and the surrounding landscape.

The entire Figsbury site is part of a Site of Special Scientific Interest (SSSI) overlooking the valley of the River Bourne. The earthworks create a rich environment for unusual plants; wild orchids abound here in late spring and early summer. 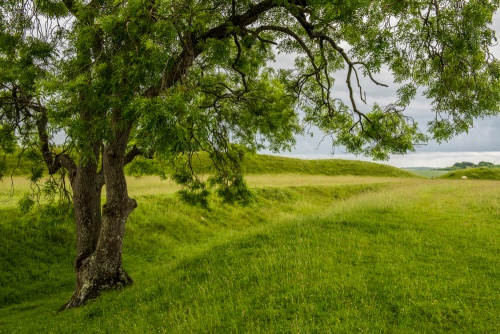 The development of the site is a subject of debate amongst archaeologists. It is possible that Figsbury began as a causewayed enclosure which was modified to create a henge in the late Neolithic or early Bronze Age and modified again in the late Bronze Age or early Iron Age. The site seems to have been occupied intermittently from the middle of the third millennium BC (roughly 2500 BC).

The Iron Age earthworks are roughly oval in shape, enclosing an area of 6ha. The earthwork bank is 18m wide and 3.4m high and encloses an area of 252m x 283m. Outside the bank is a ditch measuring 8m wide and 0.9m deep. Outside this is a counterscarp bank 10m wide and 0.5m high. The entire enclosure is roughly concentric with the earlier henge monument within it. The ditch was dug in a V-shape, unlike the henge, which had a flat ditch. 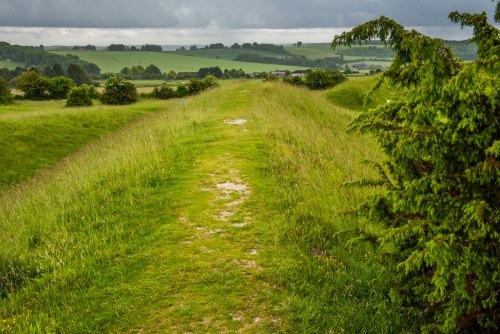 On top of the Iron Age earthwork bank

There is an entrance in the east, defended by an outwork bank and ditch, and another in the west, without any defences. Iron Age pottery was found inside the hill fort.

In 1704 a Bronze Age sword was found at Figsbury. The sword is now held at the Ashmolean Museum in Oxford.

Inside the hillfort is an oval enclosure thought to be a Neolithic henge. The henge is roughly 151m x 187m and is defined by a single ditch 14m across and 4.5m deep. There are two gaps in the ditch for entrances, located directly opposite each other. Investigation in 1924 revealed that the flat bottom of the ditch held animal and human bones as well as Bronze Age pottery fragments. 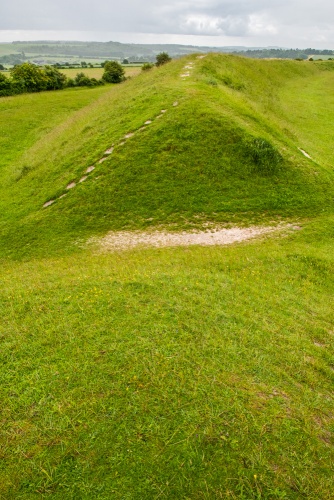 Looking along the Iron Age earthworks

Figsbury Ring is an important setting in author EM Forster's 1907 novel, 'The Longest Journey', where it is known as the Cadbury Rings.

Figsbury Ring is of the A30, 2 miles east of its junction with the A338. There is a large car park at the end of a rough track - take care driving! There are no visitor facilities of any kind, but the site is open at any time.

More self catering near Figsbury Ring