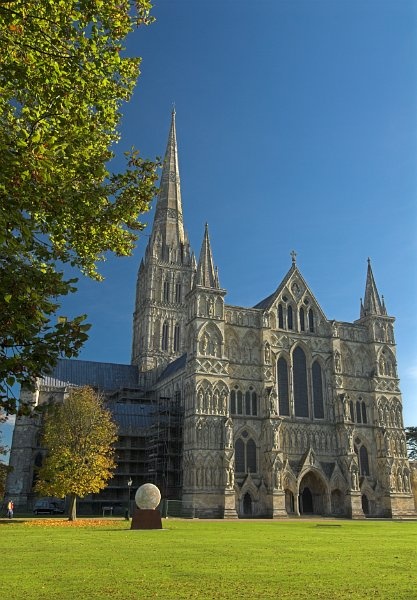 The history of Salisbury Cathedral goes back well before the first foundation stone was laid in 1220. To understand the history of the cathedral you have to travel north from the city centre a distance of several miles, to Old Sarum. Here, shortly after the Conquest, the Norman conquerors of England built a castle within the protective earthen banks of an Iron Age enclosure.

In 1075 Bishop Osmund built a cathedral on the low ground beneath the castle motte. This would have seemed a good spot to build, for the castle would offer the monks of Old Sarum protection in those turbulent times.

However, the monks and the castle garrison were not happy stablemates; over the following century and a half, the monks of Old Sarum and the garrison of the castle clashed repeatedly. Finally, in 1220 the Bishop of Salisbury, Richard Poore, determined that he would build a new cathedral, far from the influence of the castle at Old Sarum.

A fanciful legend tells that the Bishop stood on the castle mound and shot an arrow high into the sky, vowing to build his church where the arrow landed. 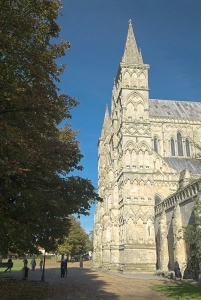 He must have been a prodigiously mighty man, for the site of the new cathedral lies several miles south of Old Sarum, in water meadows beside the slowly moving River Avon. Poore chose as his architect a canon of the cathedral named Elias de Derham, who had helped build the shrine of St Thomas Becket at Canterbury Cathedral.

We know little else about Elias de Derham, save that he may have used the services of a master mason named Nicholas of Ely to carry out his brilliant design. And brilliant it was; for a start, the water meadows where Bishop Poore decided to build his new cathedral had very little in the way of firm ground to support the weight of the structure. It is estimated that the massive tower rests on only 4 feet of gravel foundation.

The first foundation stone was laid by Bishop Poore in 1220. The cloisters were begun in 1240, and the lovely Chapter House in 1263. In 1265 a free-standing bell tower was added. This bell tower is long gone, the victim of remodelling carried out in the late 18th century by architect James Wyatt. 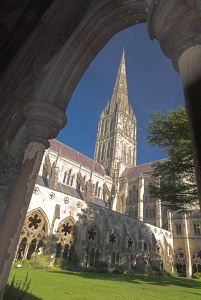 The cathedral spire
from the cloisters

Bishop Poore needed clerics to carry out the work of the cathedral, and he brought in priests, clerks, canons, and senior clergy. These he gave parcels of land ranging about the Cathedral and along the river bank. Lower clergy were allotted an acre and half upon which to build their dwellings, and the senior clergy were given twice that measure.

The land upon which the clergy dwellings were built is the Cathedral Close. In 1331 the Close was walled with stone taken from the original Norman cathedral at Old Sarum. Many of the old medieval buildings still remain within the Close, though some have been torn down and replaced with beautiful Georgian townhouses, such as Mompesson House and Wren Hall.

Salisbury Cathedral was built between 1220 and 1258, in a style we now call Early English Gothic (or just 'Early English' for short). This style emphasized height and light, and compared to the bulkier, heavier buildings of the 11th and 12th century, were quite revolutionary. Salisbury Cathedral is unique in England. Most grand churches evolved slowly over centuries, resulting in a finished structure that spans a multitude of architectural styles.

Some cathedrals work as a finished whole, but some have the feel of a portrait painted by a variety of artists in different media and in different styles. Uniquely, Salisbury was built nearly to completion within a single generation. As a result, the final structure presents a unity of vision that is very satisfying and evocative of a single era of English architecture and is probably the finest example of Early English in the country. 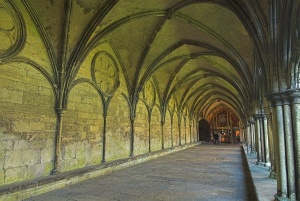 The spire, the tallest in Britain at 404 feet, was one of the last parts of the cathedral to be completed, in about 1330. It has undergone repair several times during the following centuries, the most famous occasion being when Sir Christopher Wren was commissioned to undertake an architectural survey.

Wren determined that the spire was leaning off plumb by 30 inches, and had iron rods inserted to strengthen the structure. Centuries later Wren's work was checked, and modern measurements revealed that the tower had not moved so much as an inch. Sir Christopher, it seems, knew his business well.

Salisbury Cathedral makes exceptional use of Purbeck marble. Now Purbeck marble is not marble, nor in this case, does it come from the Isle of Purbeck. It is crystalline limestone, and it was quarried in Corfe Castle, Dorset. No matter, the dark, slender columns create here a quite fabulous sense of space and height. The Purbeck marble is used primarily in the column shafts of the nave and aisles, and in the vault ribs.

Salisbury is blessed with an intriguing variety of medieval tombs. Though not so overwhelmed with monuments as are some churches, there are some real gems. Most of the older tombs are lined up between the pillars on dividing the nave from the aisles.

Here is the tomb of William Longespee (sometimes called Longpre), the first person known to be buried in the Cathedral. Longespee was the half-brother of King John and the illegitimate son of Henry II. It was Longespee who brought the Magna Carta to Salisbury.

On a curious note, when Longespee's tomb was opened centuries after his death, a dead rat was found in his skull, and the rat's corpse contained traces of arsenic. Make of that what you will, but it does seem to suggest that Sir William may have met a rather unusual end. 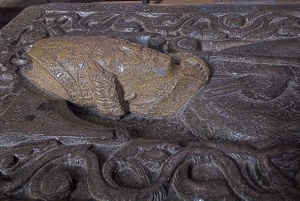 Continuing up the south aisle you come to a wonderfully painted wall memorial to Elinor Sadler, a rich Salisbury resident who died in 1622. The inscription describes her as "truly virtuous and religious'", but after studying the rather grim countenance, one can't help but feel that she wasn't the sort of person you'd like to spend time with.

Carrying on up the south aisle, cross the south transept and you come to one of the glories of Salisbury Cathedral; the Mompesson tomb. Here lie the beautifully painted effigies of Sir Richard Mompesson and his wife Katherine. Sir Richard lived for a time at Arundells in the Cathedral Close and was distantly related to Sir Thomas Mompesson, who later built nearby Mompesson House, a lovely Georgian townhouse in the Close.

As truly marvellous as the Mompesson tomb is, it pales in sheer opulence beside the tomb of Sir Edward Seymour, Earl of Hertford, which stands at the very east end of the south aisle. The tomb stretches to a great height and seems all marble and gilt. Sir Edward married Katherine, sister of Lady Jane Grey, and their effigies lie side by side beneath a fantastically carved canopy.

Because Katherine had royal connections, her effigy is shown slightly elevated, as if she has just decided to sit up. This slight elevation is supposed to indicate her higher social standing than her husband, who was, after all, only an Earl.

Between the Seymour tomb and the Trinity Chapel lies the very plain memorial to Richard Poore, the bishop who moved the cathedral from Old Sarum. One more tomb deserves note; near the easternmost end of the north aisle is the chantry chapel of Edmund Audley, Bishop from 1502-1524.

The chapel is very small and can admit no more than a few visitors at a time in any comfort, but those who climb the few steps to enter in, are rewarded with a wonderful sight. The chapel ceiling is a riotous delight of Gothic painted vaulting. The colours are resplendent, and the overall effect is quite wonderful. 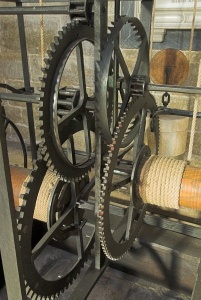 The oldest working clock in
Europe, dating to 1326

The greatest treasure in Salisbury is housed in the lofty Chapter House. Here, protected from the light by a shaded awning, is one of the few original copies of the Magna Carta in existence. This simple roll of parchment is deceptively small, but the aged lines written there were the cornerstone of a legal system that has spanned the centuries.

The Magna Carta is displayed in an interactive exhibition, which only accommodates a small number of visitors at a time, therefore there may be a short queue to view the document. Visitor access is sometimes restricted, especially during Easter and Christmas. To avoid disappointment it is a good idea to visit the Cathedral website’s closures page for current details.

The Magna Carta is the major permanent exhibition in the Chapter House, although there are other temporary displays to see as well. The day I visited, I saw silver plate, royal charters, and a watch once owned by Isaac Walton.

Around the walls of the Chapter House is a lovely medieval frieze, and it is worthwhile bringing binoculars to study the beautifully carved corbel heads.

The Cloisters at Salisbury surround the largest garth, or green space, in Britain, measuring 80 acres in size. The cloister architecture is deceptively clean, almost spare, with beautifully restrained Gothic vaulting. Visitors are allowed to walk into the garth and enjoy the views up to the glorious spire above. 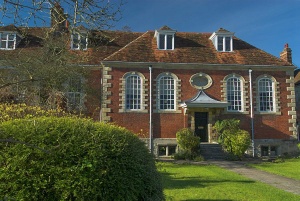 Wren's Hall,
in the Cathedral Close

I've mentioned the Close earlier. In the 17th century it must have been a riotous place, with taverns and alehouses occupying the buildings formerly inhabited by medieval clerics. Today, however, the Close is a peaceful haven of open green lawns and quiet lanes ranged about the Cathedral, with a lovely mix of medieval and elegant Georgian dwellings.

Some of the dwellings have been given over to other uses. One houses The Wardrobe Regimental Museum, home of the Duke of Edinburgh`s Royal Regiment.

Another is Mompesson House, a Georgian townhouse now owned by the National Trust. Still another is Kings House, now home to the Salisbury and South Wiltshire Museums. The Medieval Hall, once the Deanery, is among the oldest buildings in the Close.

Take the time to stroll about the Close and enjoy the atmosphere. It feels like a stroll through time; with rich and varied architecture spanning almost 800 years your constant companion.

For the best views in Salisbury take advantage of regularly scheduled Tower tours. If you are with a group it makes sense to pre-book a tour. Information on tours can be had through the official cathedral web site below.

Entry
Free, but a donation is requested. Leaflets in several languages are available, and there are numerous volunteer guides on hand to answer questions.

More self catering near Salisbury Cathedral