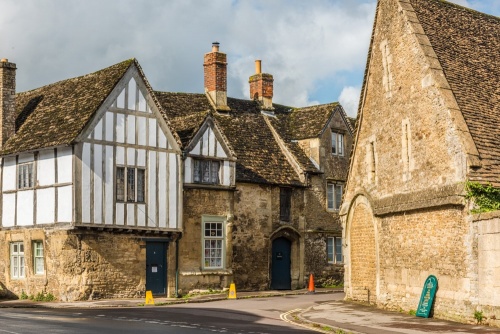 Wander into the 18th century. Feast your eyes on thatched and stone cottages. Revel in Tudor, half-timbered 'black and white' buildings. Lacock, on the southern edge of the Cotswolds, was once a centre of the medieval wool trade. Today it still reflects those times, and no TV aerials or overhead cables spoil the scene.

Lacock village developed in Saxon times. Norman lords then ruled the area and built a church in honour of St Cyriac. Lying on the direct London to Bath route, the village prospered, and the church was rebuilt in the Perpendicular style in the 15th century. A timber-framed 15th-century wool merchant's house, now "The Sign of the Angel", occupies pride of place on the main street.

Cruck House continues the feast with its bent wooden beams leaning to hold up the roof. The Tithe Barn, also constructed in the cruck beam manner, retains its dirt floor. The Packhorse Bridge, built in the 18th century, carried traffic on what was the main road from Lacock in medieval times. It solved the problem of passage when the Byde Brook was in flood. 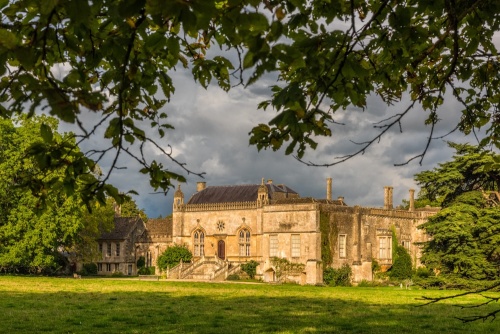 Lacock Abbey, on the edge of the village, was founded in 1232, by Ela, Countess of Salisbury. Countess Ela was the first and only female sheriff of Wiltshire. She built the Abbey as a tribute to her husband and became its first Abbess.

At the dissolution of the monasteries, the Abbey was turned into a country house and its church was destroyed. Fortunately, it still retains its cloisters, sacristy, chapter house and monastic rooms. Fine furniture, portraits, and stone carvings please the eye's palette.

Enjoy the 16th-century stable courtyard with its half-timbered gables and bakehouse. Wander in the Victorian woodland garden amidst its spring flowers and roses.

At the entrance to the Lacock Abbey grounds is the Fox Talbot Museum dedicated to William Henry Fox Talbot, who invented the positive-negative film process and is known as the father of modern photography. fox Talbot lived in Lacock Abbey and performed his first experiments in photography there. Thanks to his granddaughter, who presented the Abbey and village to the National Trust, we can, today, partake of the past. 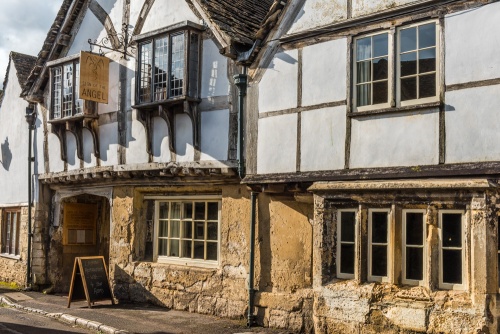 The films Pride and Prejudice, Moll Flanders and Emma were partially filmed in the village, and Downton abbey used Lacock as a setting. By far the most popular film connection, however, is with the Harry Potter series of films.

A fascinating combination of a medieval monastery and a comfortable Tudor mansion, Lacock Abbey was founded in the 13th century as an Augustinian nunnery. After the nunnery was suppressed by Henry VIII in 1539 the abbey was purchased by Sir William Sharington. Thankfully, Sherington kept the medieval cloisters, including the chapter house.

Lacock Abbey was later the home of the Fox Talbot family, and the photography pioneer William Henry Fox Talbot carried out his early experiments here. 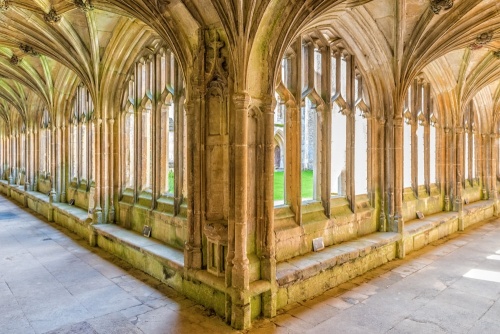 Located in a former barn at the entrance to Lacock Abbey is a fascinating museum dedicated to William Henry Fox Talbot and the beginnings of photography. The prize exhibit is the first negative created by Fox Talbot, from a photo of a bow window at his family home of Lacock Abbey. There are several early cameras and historical objects collected by Fox Talbot on his travels. 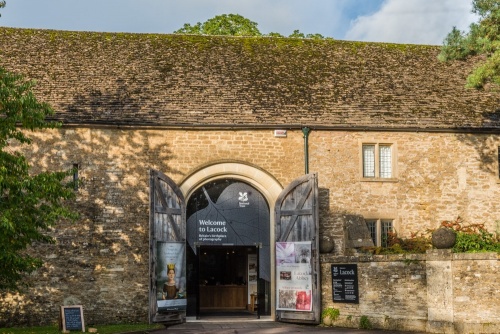 Tucked away at the eastern end of Church Street is the wonderful medieval church of St Cyriac. The most impressive historical monument in the church is a beautifully-preserved memorial brass to Robert Baynard (d 1501) and his wife Elizabeth. Below the figures of the Baynards are smaller brass depictions of their eighteen children, the sons to the left and the daughters to the right.

Equally impressive is the richly decorated Renaissance tomb of Sir William Sherington in the chancel. Sherington was the first lay owner of Lacock Abbey after the Reformation. In the churchyard are several 17th and 18th-century table tombs, the oldest dating to 1619. 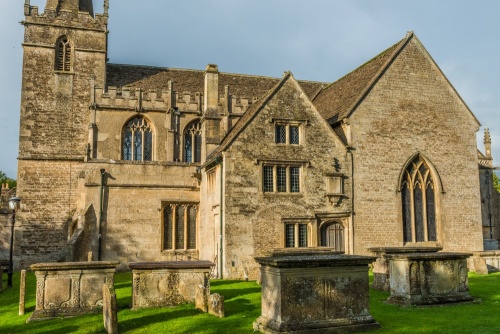 One tomb that you might expect to see in the churchyard is that of William Henry Fox Talbot, the photography pioneer. However, by the time Fox Talbot died in 1870 the churchyard was full. A  new graveyard was opened on West Street, a five-minute walk away.

From the churchyard walk west along Church Lane to the end and turn left onto West Street. Follow West Street south, passing its junction with High Street. You will come to the gates of the village cemetery on your right. Fox Talbot's grave is immediately to the right of the main path.

Do not be misled by online guides that claim Fox Talbot's grave is in the churchyard! It is not. Even the National Trust's website was making this erroneous claim the last time we checked. 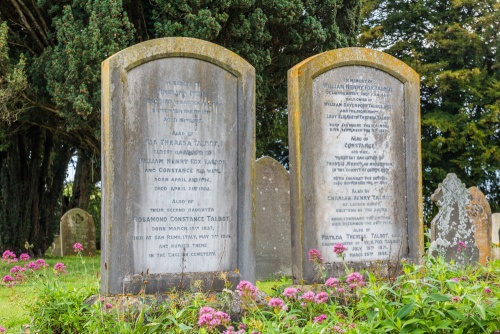 At the junction of High Street and East Street is a restored 14th-century tithe barn, built into the medieval precinct wall of Lacock Abbey.

During the medieval period, most of the inhabitants of Lacock were Abbey tenants. They would have paid their rents 'in kind', that is, with products such as grain and wool rather than with money. The barn was used to store these rents.

After the abbey was suppressed the barn was used to store agricultural machinery, and later as a market hall. Attached to one end of the barn is a small 18th-century chamber used as the village lock-up. 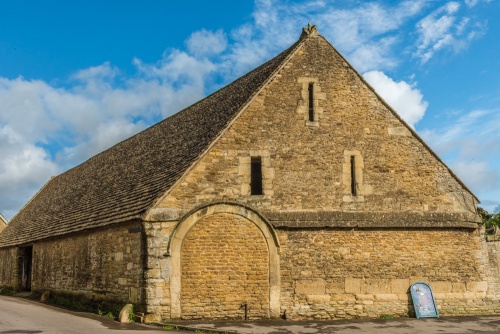 Opposite the parish church of St Cyriac, a lane called Nethercote Hill dips down to an 18th-century packhorse bridge over Byde Brook, a small tributary of the River Avon. This was once the main north/south route through Lacock and for many years the packhorse bridge was essential to travellers. The humpbacked bridge is made of rubble stone, with two arches. 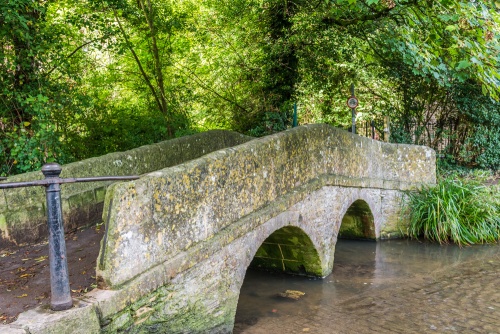 On High Street stands the Red Lion, built around 1730 and probably the most popular place for drinking and dining in the village. If you'd prefer something a little smaller and a lot older, try the timber-framed Sign of the Angel inn on Church Street, built around 1480. But even the Angel isn't the oldest inn in Lacock; that honour falls to the George Inn on West Street, built in 1361.

By far the easiest way to visit Lacock is to park in the National Trust parking area (pay and display for non-members). Follow the brown tourist signs off the A350, which lead you to the car park on Hither Way, the road to Bowden Hill. 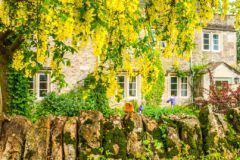 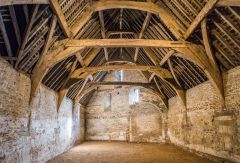 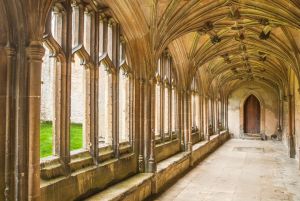 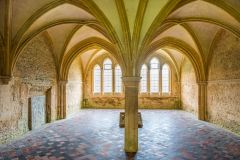 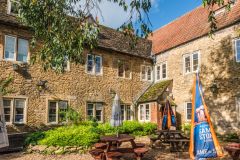 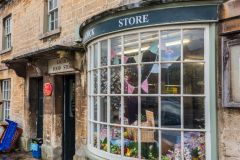 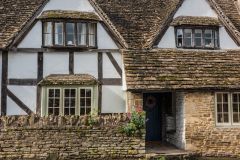 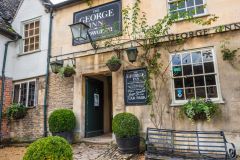 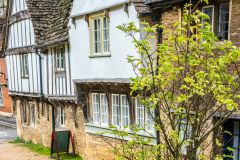 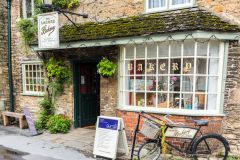 More self catering near Lacock

More bed and breakfasts near Lacock