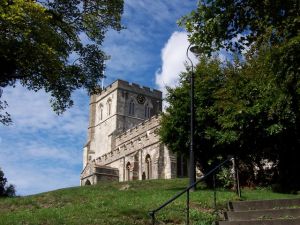 Edlesborough, St Mary's Church
A historic country church on a hillside overlooking the Vale of Aylesbury, St Mary's dates to at least the 13th century. The exterior features a very large and solid west tower, with an external stair turret, plus a battlemented nave and chancel.

While the exterior is attractive, the interior features especially good examples of medieval woodwork. The medieval work includes the chancel and nave roofs, choir desks and stalls, and an essentially complete carved rood screen. The pulpit has an extravagant 4 tier tester, and there are medieval floor tiles still in place. A more modern effect is provided by Victorian floor tiles and stained glass by the Kempe workshop.

The lectern is made from wood rescued from the medieval spire when it was hit by lightning and burned in 1828. There are several medieval brasses in the chancel, including one to Sir John Swynshide, who died in 1390. The north transept is the Rufford family chapel, with numerous memorials to members of the Rufford family.

The oldest parts of the church probably date to the late 13th century. A chantry chapel dedicated to Our Lady and All Saints was added in 1338, and the tower around 1340. The nave roof was raised in the 15th century when a set of attractive Perpendicular windows were added.