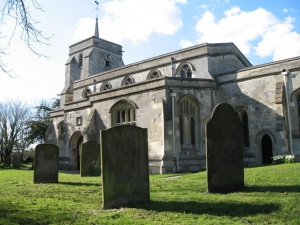 The church at Eaton Bray (then called Eitone) was begun about 1200 under the patronage of the local baron of Eitone, William de Cantelou, using stone from nearby Totternhoe. The exterior has been much altered since Cantelou's time, with 15th-century Perpendicular windows and a squat tower.

Much of this late remodelling can be attributed to Reginald de Bray, a confidant of Henry VII. It was Bray who is said to have placed Richard III's crown upon Henry's head after the Battle of Bosworth.

Bray helped rebuild St. George's Chapel at Windsor Castle, but he was also responsible for expanding the church at Eitone, which henceforth became Eiton Bray, and later, Eaton Bray.

The south door is covered with particularly fine 13th-century scrolled ironwork, though the wood is more modern. Inside the church, look for the delicate carvings on the north arcade (1220), and the marks of the old roof, which was raised in the 15th century. The corbels supporting the current roof are carved with human faces.

Parts of the early church survive in the 13th-century piscina, and the chancel arch (1320), but much is Reginald de Bray's work. Under the north-east window in the chancel is the tomb of Jane, Lady Bray, who married Reginald's nephew Edmund. Her funerary brass used to grace the tomb of an abbot or bishop, from whence it was taken during the Reformation. Lady Jane is portrayed in prayer with her son and ten daughters.

Near the organ are long "thatching hooks", used to drag burning thatch off cottage roofs.

More self catering near Eaton Bray