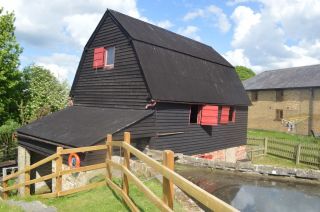 The first record of the mill at Ford End comes from 1616, but there was almost certainly a mill on the site long before then. A mill was recorded at Ivinghoe in 1232, but we do not know if it was located here. A county record in 1795 shows that the mill was producing 16 sacks a week, under the direction of William Heley.

On the first floor of the mill is a board painted with the date 1795 and the initials WH, which must surely be Heley.

The mill was rented out to tenant milers in the early 19th century, then purchased by the Ashridge Estate in 1826. From the 1920s the mill formed part of Ford End Farm and was operated by successive generations of millers from the Jellis family.

It milled animal feed and meal for nearby Neyrnut Manor, one of two manors in Pitstone parish. It later expanded its operation to produce meal for the village and local farmers, but at the end of its working life, it produced just animal feed for the farm at Ford End.

The mill remained in operation until 1963 and was then restored and opened to the public by the Ford End Watermill Society, a local charity group.

The mill stands three storeys tall and is built to a traditional pattern, with a bin floor on top (where grain is stored), a stone floor in the middle (where the millstones are) and a meal floor at ground level (where meal is delivered from the millstones).

The walls are of red brick, supported by a timber frame, faced by weatherboarding on the outside. Many of the timbers have been reused from other buildings and some date to at least the 17th century.

The millwheel is fed from a pond, which forms three sides of a moat that encircled the original farmhouse. The moat acted as a defensive measure and helped provide fish and waterfowl for food. The millpond is fed by Whistle Brook, which emerges from a spring not far from nearby Pitstone windmill.

The millwheel itself is an overshot design, 11 feet in diameter, and 5 feet wide, with 30 wooden buckets. The buckets were originally made of oak but these have been replaced with galvanised metal for longevity.