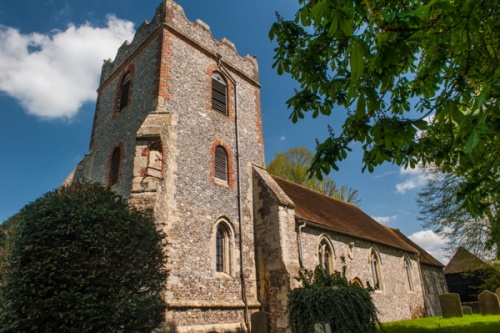 There was a church here on the east bank of the River Thames in the Saxon period, and fragments of a Saxon pillar piscina are collected in a box by the pulpit. We do not know what became of the Saxon church; it may have been destroyed by marauding Danes before the coming of the Normans. After the Norman Conquest, a new church was erected. This, in turn, has vanished, save for some large stones set in the walls, and a mass dial above the south door.

In the 12th century, the living of North Stoke passed to Henry II, and Henry III later gave it to his brother Richard, Earl of Cornwall. It was Earl Richard who presented the first recorded priest in 1236, a monk from St Albans known simply as Robert.

Brother Robert must have died shortly after, for within a year Robert de Esthall was appointed priest, and Esthall's stone grave slab is set in the floor of the chancel. Sometime around the beginning of Esthall's 37 years as priest the new church was built, probably finishing around 1240. 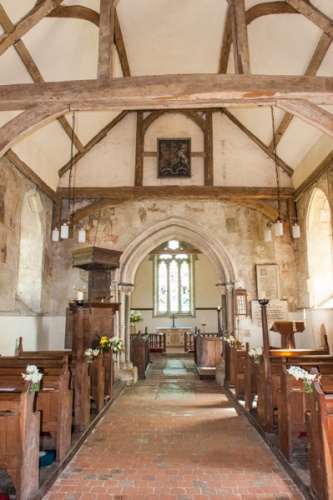 One of the most interesting historical features - aside from the wall paintings - is a 13th-century oak chest, usually considered to be a Crusader's chest. We don't know who it belonged to, but consider that Earl Richard is known to have gone on Crusade to the Holy Land from 1236-1242 and that the Earl had a close association with North Stoke, it does not stretch the imagination too much to suggest that the chest belonged to Earl Richard.

The tower collapsed in 1669 and was not repaired until 1725, giving it a slightly different look to the rest of the church.

During a restoration in 1902, several interesting features were discovered. On the south side of the nave a brick vault was unearthed, and a coffin-shaped memorial stone was found under the chancel arch. The Esthall grave marker in the chancel was discovered, with an inscription in Latin translating as 'Here lies the body of Robert de Esthall formerly Rector of the church. Pray for the Soul of that man'. 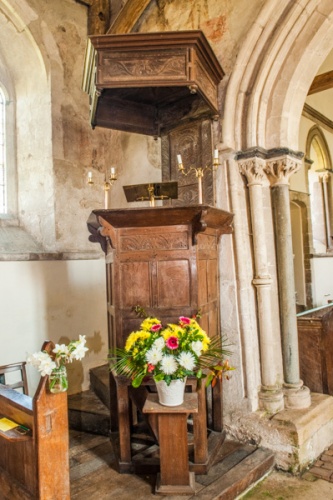 The Jacobean pulpit
and sounding board

The main historical interest at North Stoke is a quite wonderful array of 14th-century wall paintings covering much of the nave. The quality of the painting is exceptional, and though many scenes are now fading, you can clearly make out most of the individual figures. It must have been an astonishing sight when first painted.

On the north nave wall (on the top tier) is a scene depicting the Martyrdom of St Stephen. Look for the figure with crossed legs; this is the High Priest of the Temple in Jerusalem, who sits in judgement of Stephen when he is brought to trial for blasphemy. The crossed legs are symbolic of a tyrant.

Stephen is guarded by a soldier with the face of a dog, indicating brutality. On the right is the scene of Stephen's stoning, with three figures holding stones. 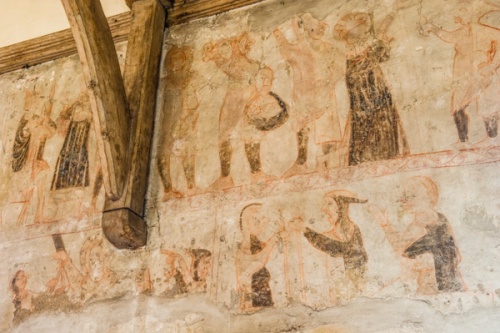 This cycle starts with a view of the Last Supper, with Christ at the far right of the scene (rather than the Davinci depiction most people will be familiar with, where Christ is in the centre). Judas would probably have been shown at the opposite end of the table, but there is no sign of him now.

Next, we see Judas receiving his coins for betraying Christ, then a very worn Crucifixion scene. Then we see the Three Maries at Christ's tomb, and the Risen Christ at the left-hand side of the scene. Much of this Passion Cycle is very worn, but enough detail remains so that you can clearly make out the scenes - though a little imagination helps!

There is no visible figure of St Thomas himself; too much of the scene has faded over the centuries, but you can clearly see the four murderous knights, clustered tightly together. Thomas is probably the worn area in the lower right of the scene, having fallen to his knees after the first few blows were struck.

One knight has his sword extended, exposing his shield, which probably had a heraldic device originally, but it is too faded to distinguish now. According to an eye-witness of the martyrdom, the first knight to strike Becket was Reginald Fitzurse, so the shield may once have born the Fitzurse symbol of a bear. 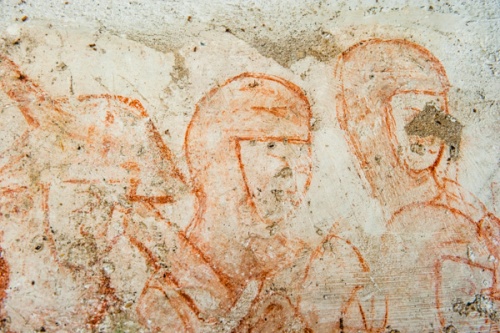 The Martyrdom of Thomas Becket

Over the chancel arch, the traditional place for Doom paintings. Very little detail of this scene can be made out.

Other scenes include three figures rising from a grave (north wall), the Annunciation (above the south door), the Martyrdom of St Catherine (north wall), and a winged demon (west window splay, south wall). One interesting scene is over the porch, where you can see three dead kings speaking to three living kings, saying 'What you are, we were, what we are, you will be'.

In the churchyard is the grave of Dame Clara Butt, a famed opera singer, who lived in North Stoke until her death in 1936. One of the most fascinating features is not apparent unless you walk around the outside of the church to the south chancel wall, where a very odd carved pair of hands seem to emerge from the wall to grasp a circular mass dial.

If you have the time, do what we did and make North Stoke part of an afternoon walk along the Thames Path. Within a few miles are medieval churches at South Stoke and Newnham Murren, and a wonderful Victorian chapel at Mongewell. 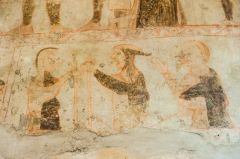 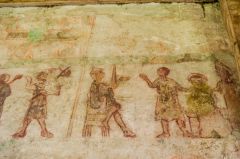 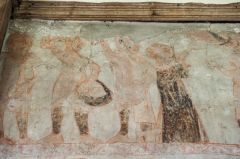 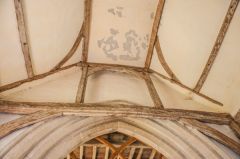 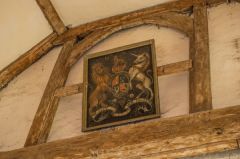 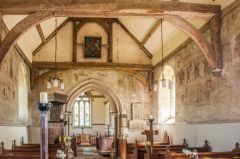 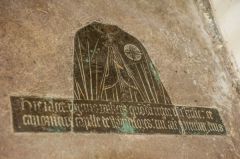 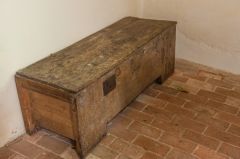 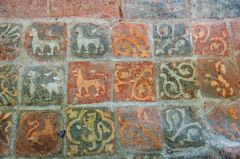 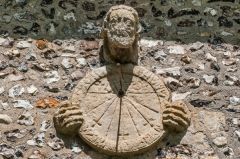 More self catering near North Stoke