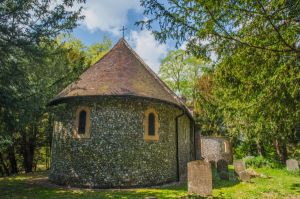 A superbly situated, though partially ruined, Norman church beside the Thames, in the grounds of Mongewell Park. St John the Baptist church consists of a ruined nave, Norman chancel in apsidal shape, and a late Georgian brick-built tower in Gothic style. The interior features several Georgian monuments and a very finely carved Victorian font.

St John's dates to the 12th century, but the current building owes much to a late 18th-century rebuilding in Gothick style. The man responsible for transforming the earlier church was Reverend Shute Barrington (1734-1826), Bishop of Llandaff, Salisbury, and Durham, who is buried in the family vault beneath the chancel. He was the son of John Shute, the 1st Viscount and Baron Barrington.

The church was restored in 1880 by Lewis Wyatt, but was made redundant in 1981 and is now in the care of the Churches Conservation Trust. 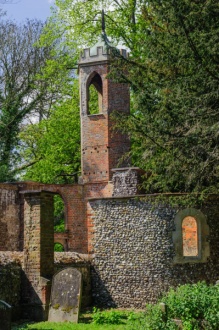 The nave is roofless, and at the west end is a very striking tower and bellcote of red brick. The tower has a round base but a hexagonal top, with a crenellated parapet. The chancel, by contrast, is well-maintained and built of flint with dressed stone, and a rounded apse.

Within the chancel are two excellent 18th-century monuments. The largest and most striking is a tomb of a young man dressed in Oriental costume, including a turban. This is John Sanders (d. 1731), who is shown life-sized, reclining on a sarcophagus, but there is no inscription on the tomb. On the wall is another, smaller monument with busts of a couple, in a similar style.

The nearby mansion of Mongwell Park was once owned by the American Henry Gould. Gould, who was an atheist, was perturbed because he could see villagers going to the church, so he had the lane leading to St John's sunk below deep banks so that the church attendees would pass unnoticed.

In 1948 the Park was converted into Carmel College, a prestigious boarding school, primarily drawing pupils from the Jewish community. Known as 'the Jewish Eton', Carmel College closed in 1997. Various attempts to redevelop the site have been unsuccessful, and the old college buildings and remains of the manor house are mouldering away, largely unused. 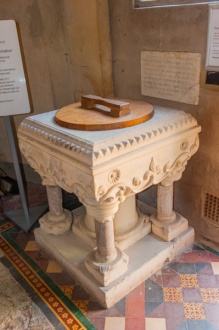 Nearby is the ancient earthwork known as Grim's Ditch, and the Ridgeway Path long-distance trail also runs close by. The church is signposted from the Ridgeway.

The Churches Conservation Trust website says simply that there is a keyholder nearby. We didn't see any sign of where to find keys, but when we tried the chancel door we found it unlocked. Maybe we were just lucky!

The trees are growing up around - and through - the site, which has an air of decay and melancholy. The ruined west end is evocative, with weeds growing through cracks in the stone floor, and fragments of historic memorials exposed to the sky.

But then you come to the chancel, which is maintained, though I did see plenty of cobwebs amid the monuments. This is really atmospheric; a wonderful mix of Victorian Gothic and authentic Norman architecture.

Immediately inside the door is a stone and marble font, but the most eye-catching feature is the monument to John Sanders, or as the CCT puts it, 'a man of sensibility'. There are some lovely cast iron fittings from the 1880 restoration, including colourful floor tiles leading to the high altar, which is set back into the curve of the apse and raised on steps.

The apse is reached through a wide Norman arch decorated with zigzag patterns, and within the apse are three small single lancets with wide, deep splays, typical of the Norman period. The best place to appreciate the Norman architecture is outside the apse, however, where you can see the stonework more easily. 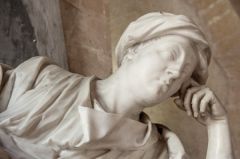 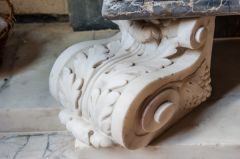