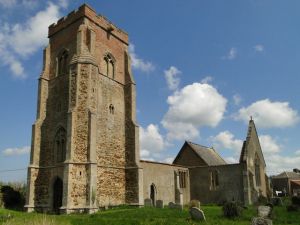 Islington, St Mary's Church
Beside the dual lane road between Kings Lynn and Wisbech stands the gaunt ruin of a fine medieval church. St Mary's, Islington, sounds like it ought to be found in the northern suburbs of London, but the name has nothing to do with the London borough of Islington, which also has a church dedicated to St Mary.

The church stands beside Islington Hall, an early 17th-century mansion.

The nave chancel and transepts date to the late 13th century, while the tower was added in the 15th century. The tower, supported by buttresses and bristling with crenellated parapets, looks almost military. The tower originally held a ring of two bells, but they now hang in Histon, just outside Cambridge.

The 13th-century church looks sizeable, but its size is misleading; only the west tower and the chancel are roofed; the rest stands open to the elements. However, the chancel does hold historical interest in the form of two monuments to the Bagges and Dixon families, lords of the manor. The oldest is a wall monument in marble to the children of Anthony Dixon, dated 1723. Beside it is a beautifully carved memorial to Edward Bagges, who died in 1846.

We know that the church was inspected in 1883 and found to be intact, but some time in the following decades the nave and transept roof collapsed from neglect. Not surprisingly, Islington St Mary's is no longer used for regular worship and is in the care of the Churches Conservation Trust. The chancel was closed off by a wall erected in 1972. You can view the exterior during daylight hours, but your view of the monuments in the chancel is limited to peeking through a grilled window.

UPDATE
I've since learned that the grilled window has been replaced by plastic sheeting, obscuring views of the monuments, which seems a real shame.

NB. The church is sometimes also referred to as being located in Tilney-cum-Islington, though historically, Tilney is a separate parish. Access is by a farm track off a roundabout on the dual-lane A47 three miles south-west of King's Lynn.