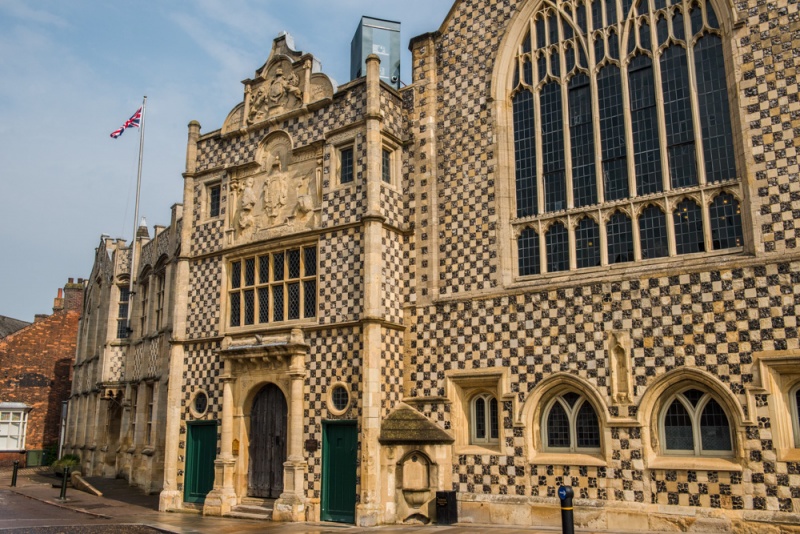 The Town Hall and Trinity Guildhall

King's Lynn's historic town hall began as a meeting place for a religious guild of merchants known as the Guild of the Holy Trinity. Their 15th-century meeting place, more commonly known as Trinity Guildhall, stands directly across from King's Lynn Minster on the north side of the town's Saturday Market Place.

Above the main window are the royal arms of Elizabeth I, which were installed here after being removed from St James Church in 1624. Above them are the arms of Charles II, added in 1664. The Guildhall is really only part of a complex of historic buildings which make up the town hall. The complex is recognisable by its striking chequerboard pattern of flintwork facing onto the Saturday Market Place.

The heart of the Guildhall is Stone Hall, a medieval hall with a stone floor and oak-beamed ceiling. The Stone Hall is the original Guildhall, built in 1421. Among the portraits on the walls is the very first portrait painted of King George VI and Queen Elizabeth the Queen Mother. The portrait was given to the town by Elizabeth II.

The Guild was suppressed by Henry VIII at the Reformation and half of the Guildhall undercroft was used as a prison. In 1618 the other half was used as a Bridewell House of Correction. In 1624 the Guildhall gained its imposing Hall Porch. In 1767 a court room was built and the following year the Assembly Rooms and adjoining Card Room were constructed.

In 1784 a house was added for the town gaoler, based on the design of Newgate prison in London. From 1866 prisoners no longer served gaol sentences in the cells, however the cells continued to be used as the town lock-up until 1937. 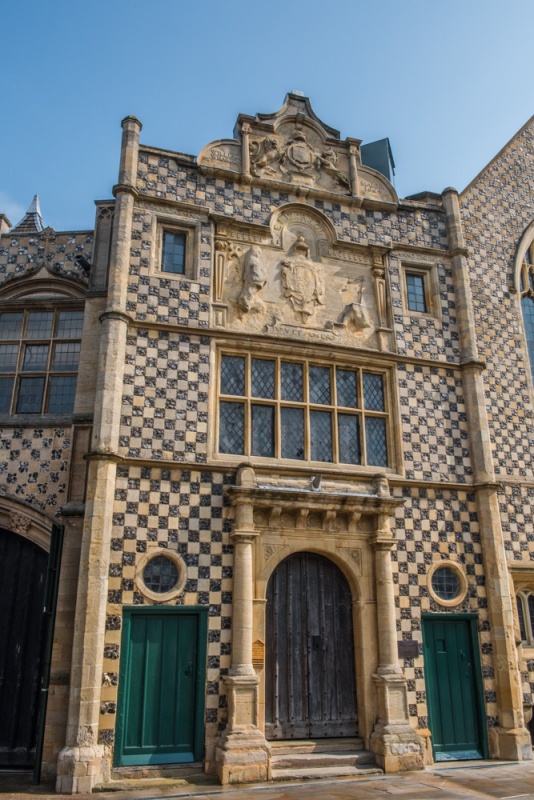 The Georgian Assembly Room is a fashionable 18th-century space now used for weddings and business functions. The Assembly Room was built in 1768, and has been restored to its original 18th-century decoration scheme. The room is furnished in glittering Georgian style, with elegant chandeliers, gilded mirrors lining the walls, and its original fireplaces.

The walls are lined with portraits painted by local artists, mixing royalty with local figures like Admiral Nelson and Captain George Vancouver. In 1954 a ceremony in the Assembly Rooms granted freedom of the Borough of King's Lynn to Queen Elizabeth the Queen Mother.

A smaller Georgian room is The Card Room, dominated by a huge mirror made around 1750 and decorated in extravagant Baroque style. In the nearby Heritage Room is the John Horton print collection, focusing on Captain Vancouver. 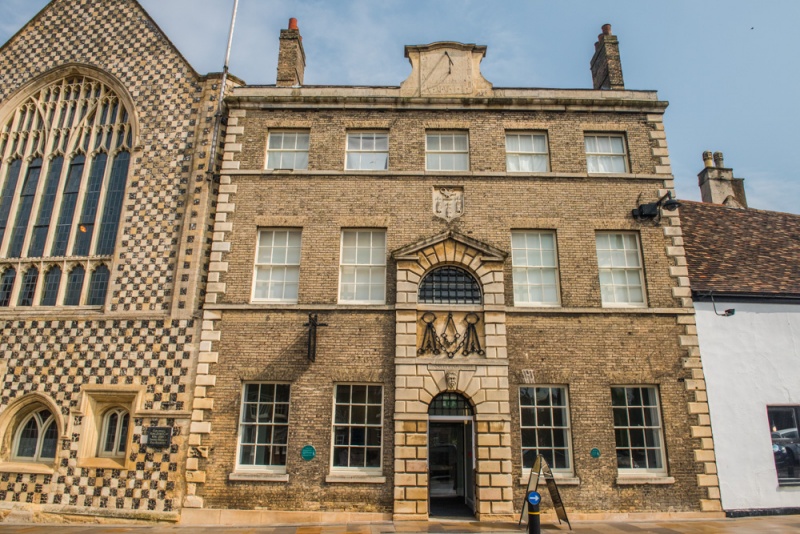 The vaulted undercroft of the Guildhall has been converted into an exhibition space. As of this writing it houses Stories of Lynn, a multi-media experience tracing the history of King's Lynn through its historic characters. Using information from the town archives Stories of Lynn tells the tale of the town's history through a cast of real characters from sea captains to merchants, civic officials, magistrates, and criminals.

A timeline of historic objects is used to trace the history of King's Lynn, and you'll learn about the role the Hanseatic League played in Lynn's explosive growth to become one of the busiest port towns in England. Follow the tales of some of King's Lynn's most celebrated residents such as novelist Fanny Burney and the medieval mystic Margery Kempe. There are historic costumes for children to dress up in, and place settings for actual meals served to Lynn's mayors at different time periods. 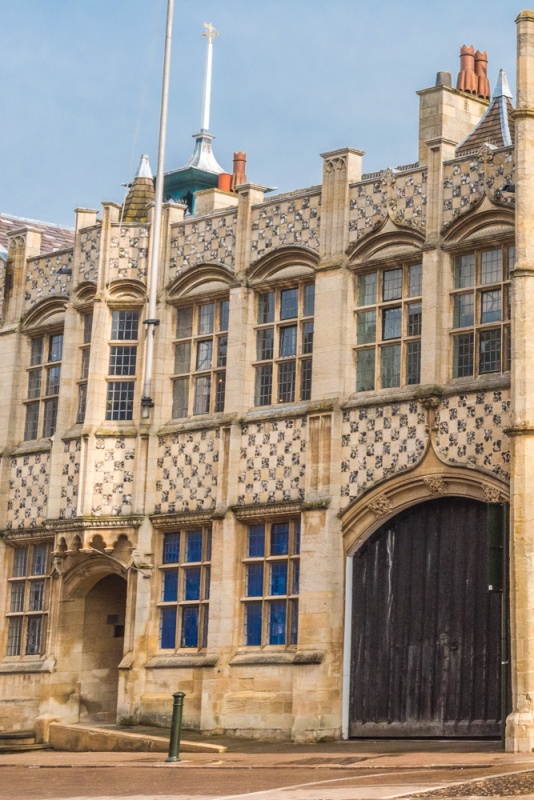 On display in The Treasury is a wealth of historic objects connected with the town. Among the objects is King John's Cup, an ornate 14th-century drinking vessel of enamel and gilt. Beside it are King John's Sword and silver maces, civic regalia still used today in annual ceremonies.

The Old Gaol House tells the story of Kin's Lynn's town hall, including its role as a magistrate's court and gaol. See restored gaol cells where criminals were kept before trial. See leg-irons used to restrain prisoners, and learn about the peculiar theory of phrenology; the idea that the shape of a person's skull can tell you whether someone was predisposed towards criminal behaviour. Practice your phrenology skills on the skull of a respected school teacher convicted of murder.

The Town Hall exhibition is open daily, and there is a small charge.