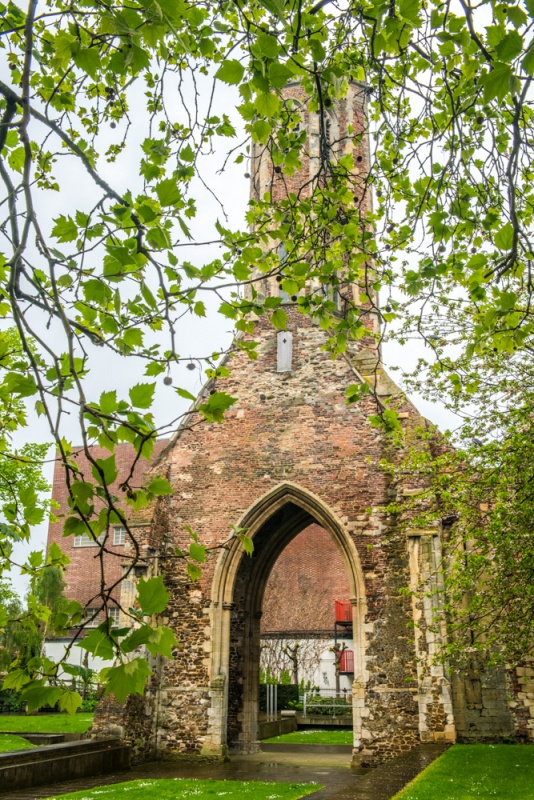 In 1235 a priory of Franciscan monks was established in King's Lynn. The Franciscans were popularly known as the Grey Friars from the colour of their robes. The priory was suppressed in 1538 by Henry VIII during his Dissolution of the Monasteries along with the town's three other friaries, run by the Augustinians, the Dominicans, and the Carmelites.

Unlike monastic orders like the Cistercians who established their abbeys far from centres of population, the Grey Friars lived among the people, preaching and teaching to the local population. They took vows of poverty and relied on donations from local people to survive.

Greyfriars was a medium-sized friary, supporting 38 friars in 1325. In the early years of the 14th century, the friars designed a system of conduits to bring fresh water from a spring at North Runcton, over a mile away. The friary grounds were surrounded by a high stonewall, entered through an imposing gatehouse.

The monastic buildings were torn down and the stone used for building projects, with one major exception. The 15th-century bell tower of the friary church was spared because it acted as a useful navigation aide to sailors navigating The Wash. 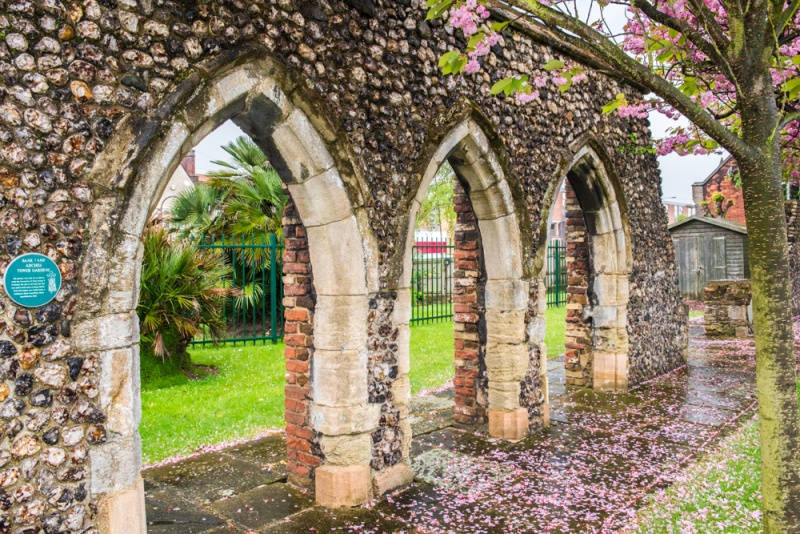 The tower stands 93 feet high (roughly 28m). It is built of brick with ashlar quoins. The tower leans at a very noticeably angle, and not surprisingly has been dubbed the Leaning Tower of King's Lynn. The tower leans at one and a half degrees; noticeable, but not comparable to the more famous tower in Pisa! The tower began leaning because it was built on marshy ground, and over time it began to tilt markedly to the north-west.

In 1911 the Greyfriars site was laid out as a public garden to mark the occasion of King George V's coronation. Before that time one area of the former friary grounds had been used to hold cattle awaiting market.

In 1921 a war memorial to the fallen of WWI was erected in the park. In one corner of the friary grounds is the town's public library, built in 1905. The ghost of a friar is said to haunt the library.

In 1921 a war memorial to the fallen of WWI was erected in the park. In one corner of the friary grounds is the town's public library, built in 1905. The ghost of a friar is said to haunt the library. At one time library staff reported they were afraid to enter the basement where the spectral monk was seen.

Near the tower is a section of restored 14th-century arcading, with three arches. The arches were brought here from a house at the junction of Ferry Street and Bank Lane that was torn down in 1910.

There were 60 Franciscan friaries in medieval England, and only three of these retain their towers; the others are at Richmond in Yorkshire and at Coventry in Warwickshire. Of these, the King's Lynn tower is the best preserved.

The most interesting feature is an ancient cross under the tower. Historic England suggests that it may be Saxon, dating to the 9th century. On the north face is a depiction of Crucified Christ, while the south face has a very worm carving which may depict Christ in Majesty. On the north face of the shaft is a carving of a figure climbing rocks, and there is traditional interlace carving on the south face and the sides of the shaft. 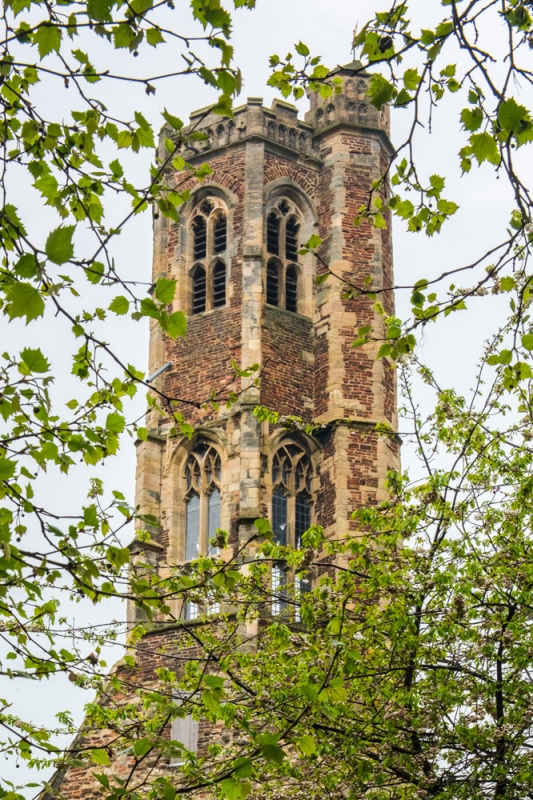 The leaning top of the tower

Greyfriar's Tower was one of the national finalists for the BBC television programme Restoration in 2003. It received a Heritage Lottery Fund grant, and with the aide of English Heritage the tower was restored and the garden was re-landscaped in 2006. More importantly for its continued survival, the tower was stabilised so that its inclination to lean will not worsen over time.

Tower Gardens is opened at 8am daily, and closes at dusk. Even if the garden is closed you can still easily see the tower from St James Street, a few paces away. Just inside the park railing is an information panel with a very useful scale model showing what the friary would have looked like. It shows the bell tower standing at the crossing of the friary church, between the nave and chancel. 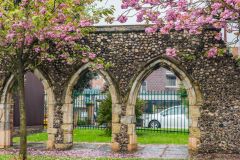 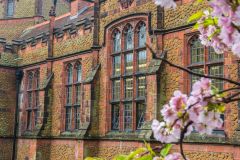