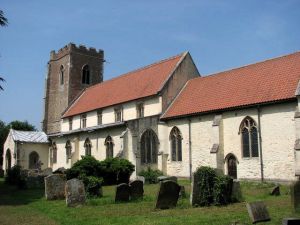 Wiggenhall, St Mary's Church
A lovely Perpendicular church in a countryside setting, behind Wiggenhall House. The most immediately striking feature of St Mary the Virgin church is that the top of the west tower is built entirely of brick.

The best feature of the church is the wood carvings that grace the interior. The Jacobean font cover is beautifully carved, but it is the late 15th and early 16th-century wooden benches that deservedly get most visitor's attention.

It is common to see carved bench ends, though seldom carved so well as this, but rare to see the backs of the benches carved as well. Here, the carving creates an almost lace-like effect, with the bench backs pierced through with fanciful tracery designs.

The bench ends are carved with likenesses of saints, and the attention to detail in the faces and costumes of the carved figures is quite exquisite.

The Jacobean pulpit is well carved, as is the rood screen. Unfortunately, the upper part of the screen no longer exists, but the lower sections are beautifully carved and painted with depictions of saints.

There are several interesting historical memorials, but none more interesting than that of Sir Robert Kervile, which is set into the floor of the south chapel. Sir Robert's memorial brass is shaped like a heart, and therein lies a story. It seems that the good knight died while abroad, and his wife, not willing to let his body rest far from his family seat, sent a monk to find Sir Robert's body and bring back his heart for burial at Wiggenhall.

Near this touching memorial is that of another Kervile (d. 1624), Henry by name, whose rather grandiose alabaster monument is in the small chapel to the north of the aisle. At the base of this tomb are the figures of Sir Henry's two infant children, who predeceased him and his wife.

St Mary's church is no longer used for regular worship and is in the care of the Churches Conservation Trust, but it is well worth a visit for the magnificent carvings.