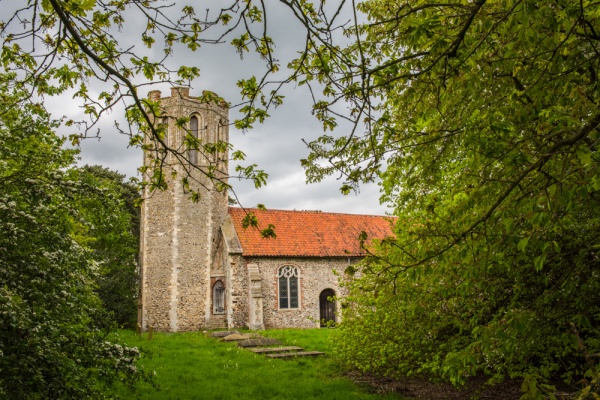 A redundant church standing beside the River Yare, St Nicholas at Buckenham is one of just five churches in Norfolk to have a completely octagonal tower. Don't confuse this Buckenham church with All Saints at Old Buckenham, which, oddly, also has an octagonal tower! 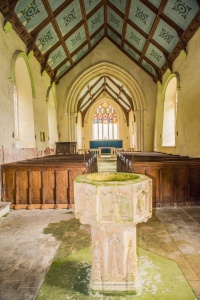 The church is composed of a long nave and chancel, of equal height, and a very slender west tower. The tower is 13th century, but the interior is primarily early 19th century, with the exception of a 15th-century font. There is colourful Victorian stained glass, the work of SC Yarington.

The most unusual feature is the tower arch, which was infilled with thin, almost lace-like tracery during the 19th-century restoration. The style is very much Georgian Gothick, medieval in purpose, but almost baroque in execution, very unlike the later, more authentically medieval, Victorian Gothic.

The superbly carved 15th-century font has a wide, multi-panelled bowl standing on a narrow shaft, also split into panels. The panels on both bowl and shaft are beautifully carved with figures of saints.

At the foot of the sanctuary step are a pair of 13th-century coffin lids discovered in the churchyard. One of the coffin lids retains a finely carved floriated cross. On the north wall of the chancel is an ornate monument to Anne Newbury, who died in 1707. Set into the sanctuary floor are leger slabs to 4 Awcocke siblings who died 1658-1660.

In 1840 a fascinating discovery was unearthed during restoration work. Buried beneath the chancel floor were two ancient treasures wrapped in sedge reeds. The first was an alabaster tablet carved to depict the martyrdom of St Erasmus. The second treasure was a Greek cross depicting a crowned Christ. The two treasures are on display at St Peter Hungate Museum of Church Art in Norwich.

Buckenham used to possess a bell cast in about 1290, making it one of the oldest in East Anglia. Unfortunately, this bell was stolen in the 1970s and has never been recovered.

St Nicholas stands in isolation amid farm fields. The setting is truly wonderful; a rural idyll. The church is no longer used for regular worship and is in the care of the Churches Conservation Trust. It is normally open daylight hours. 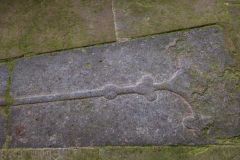