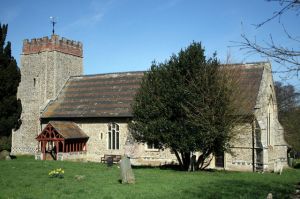 Washbrook, St Mary's Church
St Mary's church in Washbrook is a Norman country church just beyond the urban sprawl of Ipswich. St Mary's lies up a winding track, surrounded by trees and meadows in an idyllic setting.

The core of the church is 12th century or even earlier, but it was heavily rebuilt in the 14th century, with the result that much of the interior fittings and furnishings date to that period. The building is constructed of flint rubble and brick, dressed with stone. The layout is very simple, with a traditional nave, chancel, west tower, south porch, north vestry and baptistry.

The tower is decorated with stone and flint flushwork in the chequerboard pattern that you so often see in East Anglia. The tower is set upon a plinth, as are the nave and chancel, also decorated with flushwork panels. Beside the porch is a single lancet window thought to be 12th century.

The chancel contains some excellent 14th-century carving, with a sedilia, piscina, chancel stalls, and an Easter Sepulchre dating to that century. There is a lovely 15th-century font, housed in the Victorian baptistry. The octagonal font is supported by pilaster shafts carved with figures of lions. Beneath the font bowl are more carvings, depicting angels holding shields, surrounded by foliage and flowers.

The church was subject to a more modern restoration by Edmund Lamb in 1866. Lamb provided the carved wooden benches and the roof and added a north baptistry. On the north side of the nave is a memorial window to Queen Victoria, inserted after the Queen's death in 1901.

On the wall are memorial brasses to the fallen of both world wars. On the wall is a gilded royal coat of arms beneath a circular memorial to William Meyer, who died in 1808 some 24 years before his wife Edith. The most interesting historical monument is a small rectangular memorial brass reading:

Here lyeth y body of Edmund Knappe, Gentleman, who departed this life the first day of December Anno Domini 1609, beinge of the age of 69 years

In the vestry is a 19th-century fireplace with a minuscule place for coal.

St Mary's is no longer in use for regular worship and is cared for by the Churches Conservation Trust. Unfortunately, the church is usually kept locked, and visitors are advised to phone the keyholder to arrange access. Please see the Trust website for current details.