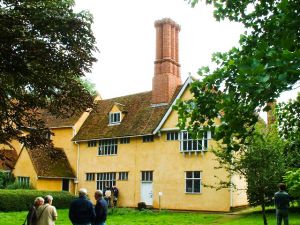 Thorington Hall
Thorington Hall is an early 17th-century Grade-II listed farmhouse believed to have been built about 1600. It is considered one of the finest timber-framed houses in Suffolk, high praise indeed for a county with so many superb historic buildings.

The house is timber-framed with plastered walls and retains much of its original architectural detail, including a chimney stack of six flues. The farmhouse was extended circa 1700 and restored in 1937.

Within the farmhouse is a beautifully decorated 11630 wooden staircase. In an unusual touch, only two of the carved newel caps are identical; the rest are individually carved to a unique design. The roof timbers in the Parlour are beautifully carved in a jewel pattern, and there is historic graffiti dating to at least 1770 on windows of the west staircase.

We do not know who built the Hall, but we do know that the west wing and the striking staircase were almost certainly the work of Thomas May, who lived at Thorington Hall until his death in 1645. In 1700 May's descendants sold the Hall to a London merchant named Bedingfield Heighmam.

The Heighmam family found the layout of the old house unsuitable, and created a new main entrance at the rear of the building, essentially turning the house around 180 degrees. They reserved the old 17th-century staircase for servants and built a fashionable new staircase facing the street for themselves.

The panel over the Parlour fireplace has painted decoration with the paint applied directly to the wooden panels after they had been steamed and treated with gesso. Over the hall is a small chamber with a fireplace housing 38 Delft tiles, each bearing a different Biblical scene.

At the base of the house is the cellar, created around 1550 and probably used to hang meat in a cool place. Wine was probably kept in a recess beneath the stairs.

One fascinating feature is a series of scorch marks on the ceiling of an attic room. These are thought to have been made to ward off witches. There are several other examples of 'apotropaic' or witches' marks throughout the house.

The Hall passed to Bedingfield's daughter Hester, who added to the east wing and left the Hall to her uncle Thomas White, who sold it to Sir Rowley of the Tendring Estate in 1764. The Hall was let out to tenant farmers for the next 147 years.

By the early years of the 20th century, the house had become derelict, and it was in a very poor state by 1937, when it was purchased by Professor Lionel Penrose, who set about restoring with advice from the Society for the Protection of Ancient Buildings. Penrose gave the Hall to the National Trust in 1940 but the family continued to live there until 1973.

During World War Two the Hall served as an evacuation residence for elderly Londoners whose homes had been destroyed by bombing. Apparently one of the evacuees had a habit of yodelling, which must have made living in the Hall an interesting experience!

Guests in the house have reported the sound of phantom footsteps in the upper part of the building when there is no one there, and occasionally a young girl is sighted on one of the upstairs passages.

The Hall is not normally open to the public except on Heritage Open Days in September, however, the National Trust has now opened it as holiday accommodation, so you can stay in one of the most historic buildings in Suffolk. See the National Trust website for further details.

Thorington Lodge, the oldest part of Thorington Hall, has now been converted to holiday accommodation by the National Trust and, as far as we can determine, the Hall is no longer open to visitors. Accommodation sleeps 3 guests in 2 bedrooms.

More self catering near Thorington Hall >>