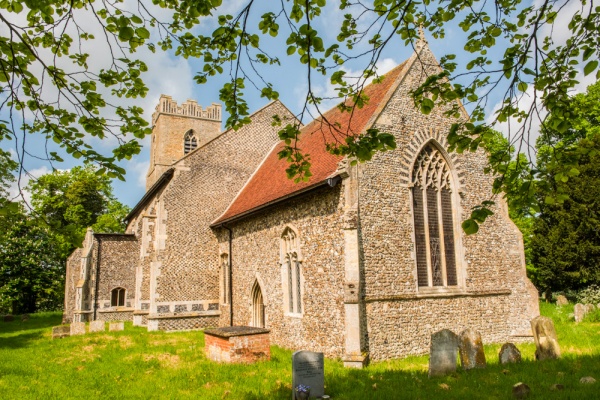 There are two Rickinghall's, Superior and Inferior, and each has a church dedicated to St Mary. The epithet 'Superior' has nothing to do with the quality of the village; it is the equivalent of 'Upper', while 'Inferior' is 'Lower'. St Mary's church in Rickinghall Superior is cut off from its village by the main A143.

Rickinghall's church was recorded in the Domesday Book of 1086. By the 14th century, the lords of the manor were the De Hyntlesham family. There was a second manor house in the parish, known as Facon Hall. It seems likely that the parishioners gradually moved away from the church as the coaching road from Bury St Edmunds to Norwich became heavily travelled. 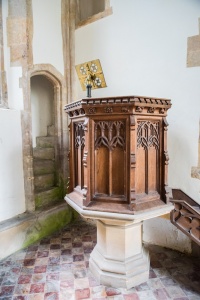 The pulpit and rood stairs

No trace of the Norman church remains, and the present church is primarily 14th century, with a sturdy west tower, south porch, nave and chancel. The tower and chancel are 14th century, while the porch is 15th century. The latter is two storeys high and has a parvise chamber (priest's room) above.

The tower is decorated with an attractive 15th-century parapet probably added by the Aldryche family of North Lopham, and above the doorway is a beautifully crafted band of flushwork decoration, with IHS and MR monograms worked in flint and dressed stone. There are magnificent three-light windows in the nave.

The interior is notable mostly for the very fine Perpendicular windows in the nave. Look for the long, low stone benches along both walls. These benches were a relatively common medieval feature, and were used to seat older or infirm people, giving rise to the expression, "the weakest go to the wall".

There is a benefaction board, made in 1843, and most of the wooden benches are other furniture were added during 19th-century restorations. There is a medieval piscina in the nave and another highly decorative 15th-century piscina in the chancel. The southeast chancel window boasts small fragments of medieval glass and there is more medieval glass above the north nave doorway.

The rest of the glass is Victorian. The large east window depicts the Crucifixion and Jesus the Good Shepherd. By far the most interesting feature in the church is the south-west chancel window depicting scenes from the life of Samuel. The windows were created in honour of Samuel Speare (1853-1873).

Speare's life makes a fascinating story. He was born to a poor family from Rickinghall, but at the age of just 15, he sailed to Zanzibar as a Christian missionary. He returned to England in 1873 and began studying for ordination at Burgh-le-Marsh in Lincolnshire. He was struck with a severe illness, perhaps caused by the contrast in climate between Lincolnshire and Zanzibar, and died at the age of just 20. The central section of the window shows four black angel faces, a reference to Speare's service abroad.

St Mary's is no longer used for regular worship and is cared for by the Churches Conservation Trust.

St Mary's is not an easy church to find if you don't know where to look and is quite simple if you do. The church stands immediately south of the A143 at its junction with the B1113. If travelling along the A143 simply turn off onto the B1113 and the church is in the trees to your right. Parking is an issue. I managed to pull off the B1113 onto the verge where is just about room for one vehicle.

St Mary's is not normally open, but a sign on the church door directs you to the keyholder, in a cottage a few minutes walk away. It is very easy to find the keyholder's house, but of course, you have to hope they are at home.

The interior of the church is largely unadorned, as many CCT churches are, with modern benches in the nave but very little else in the way of furnishings.

Do take the time to ascend the narrow spiral stair to the parvise over the porch. 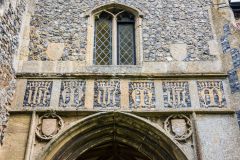 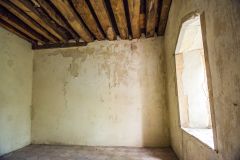 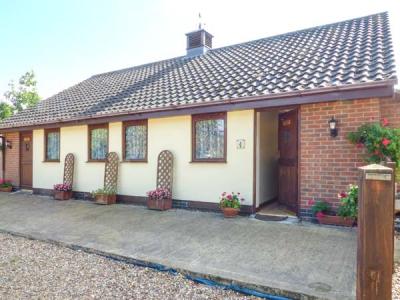 This all ground floor cottage is near the village of Rickinghall, ten miles from Diss and sleeps three people.
Sleeps 2