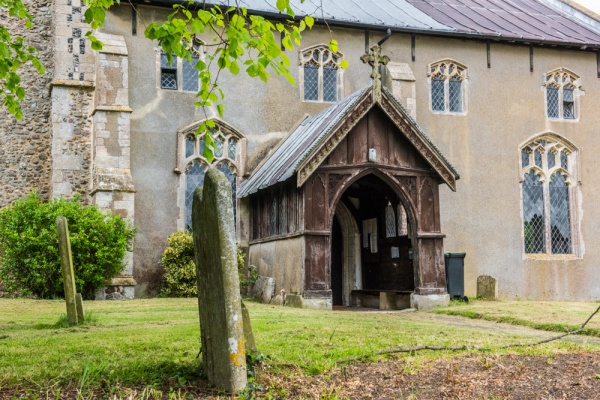 Wyverstone is a small village about seven miles north of Stowmarket. The village name is thought to come from the Old English for 'Wigferth’s farm'. At the eastern edge of the village stands St George's church, which is fairly small by Suffolk standards.

The oldest parts of the church date to the 12th century but most of the present building is 14th and 15th century.

The church is laid out on a traditional plan, with a west tower, nave, chancel, and south porch. The walls are built of flint rubble, rendered in places, but the 14th-century porch is timber. The timber was sensitively restored after WWWI in memory of William and Charles Jackson, two residents of the village who died in the war. Plaques inside the porch commemorate the Jacksons and 6 villagers who perished in WWII. Curiously, the door is not located centrally in the porch, but off to one side. The south door itself is over 500 years old. 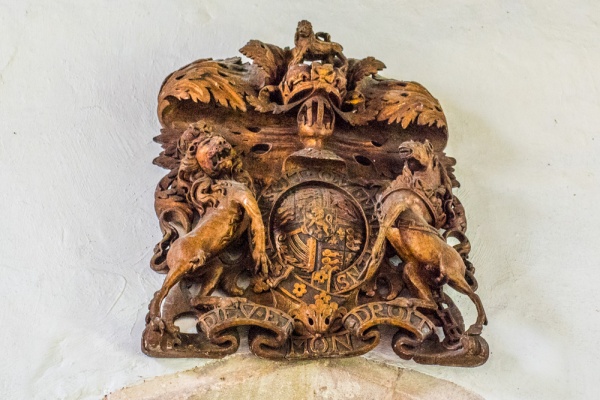 The nave roof is 15th century, with alternating arch braces and single hammer-beams. At the eastern end you can still see the pulley block used to raise and lower the 'rowell', a corona of candles that illuminated the rood, or cross, under the chancel arch.

One historic treasure is completely hidden; during restoration work on the south wall a medieval painting was discovered between the south door and the window beside the pulpit. Once exposed, the painting would quickly have decayed unless a large sum of money was spent on restoration, so the painting was simply re-covered by a fresh coat of whitewash to preserve it for future generations who might have the means to restore it.

The font is a beautiful example of 15th-century carving. The bowl is decorated with flowers set in large quatrefoils, alternating with shields set within circles. The shields all held Biblical symbols, but only one of these survived the destructive efforts of Puritans in 1642-1643. The font is topped by a 17th-century wooden cover, capped by a finial. 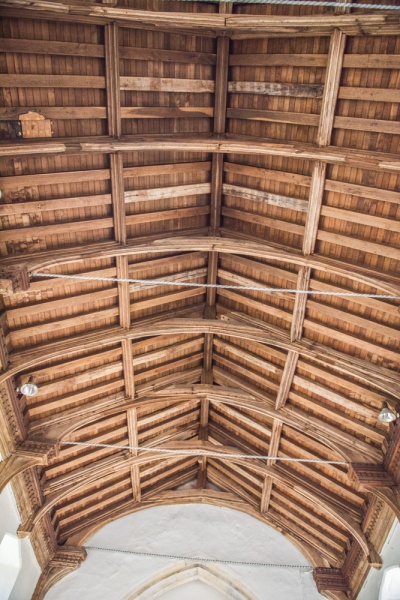 15th-century timber roof of the nave

There are several 15th-century poppyhead bench ends near the font, while others have 17th-century posts. One bench is dated 1616 and boasts a pair of initials, presumably those of the churchwardens at the time. Some of the seats are formed from cut-down Georgian box pews and panels from the box pews have been used for wainscotting around the walls.

The striking pulpit is late 16th century, with linenfold panelling. It is one of just two pulpits in Suffolk from the 16th century - the other is at Bramford.

At the east end of the nave is the base of a 16th-century screen. Only six panels remain, and these have been badly defaced. Though damaged, the screen is fascinating, for rather than have painted figures of saints in each of the panels, the saints are carved in relief. Only one other screen in Suffolk has carved figures in relief, and that is at Gislingham, a short distance away. It seems possible that the carvings were made by the same craftsman. 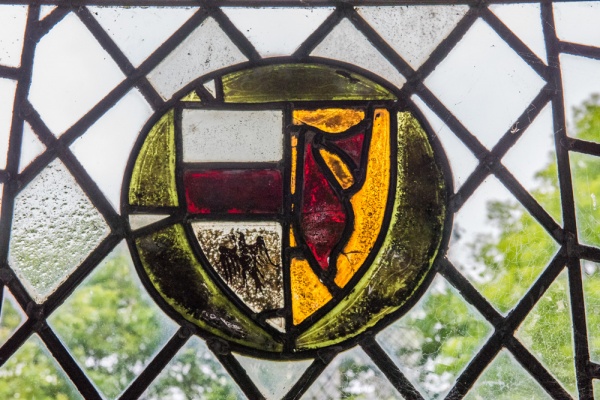 A panel of medieval glass in the nave

The first pair of carved panels show The Annunciation, with the Angel Gabriel visiting the Virgin Mary. The third panel depicted the Nativity, though this is badly damaged and the only clear figure is an ox feeding from a trough. In the next panel are the Three Magi.

On the south side of the aisle is a panel showing the Mass of St Gregory, while the final panel shows the Visitation of Mary, with the Virgin Mary visiting her cousin Elizabeth, mother of St John the Baptist. The final two southern panels have been replaced with 17th-century panelling, possibly taken from a reading desk.

In the chancel is a worn 14th-century parish chest, bound with iron straps. The sides of the chest may be later than the worn top. The communion rails are 17th century and in the south wall of the chancel is a piscina under a cinquefoil head. The piscina seems extremely low, suggesting that the original chancel floor was much lower than it is now.

There are small fragments of medieval glass in the north-east and north-west nave windows, and small glass flowers and foliage in the clerestory windows.

There are several very good memorials, including a poignant tablet to two sisters, Anne and Marie Stegall, who died in 1779 and 1793 respectively. They were sisters of William Stegall, a rector of Wyverstone from 1739-1794. He also served as Chaplain to the Dowager Countess Cornwallis. He is buried in the south-east corner of the churchyard with his wife Ann.

The church is usually open daily to visitors and we found it open when we visited. 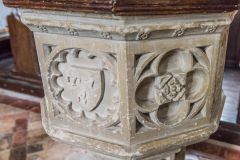 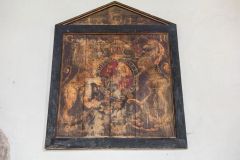