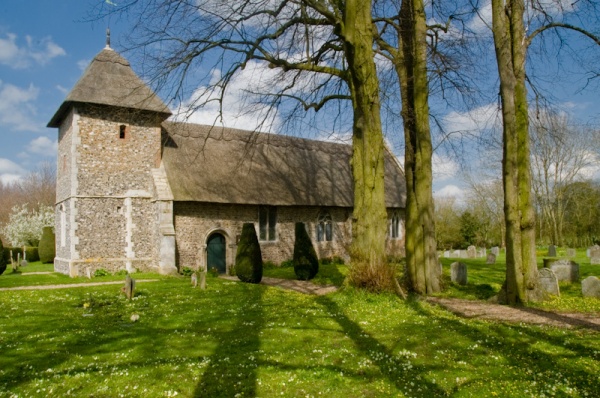 Sometime around 1330, a group of Norwich craftsmen produced a huge painted retable, or altarpiece, for the monks of Thetford Priory. The retable was a magnificent example of medieval craftsmanship, with painted figures of saints flanking a scene of the Crucifixion. The retable was made of timber felled in Poland, and red pigment used to create the colourful paint was made from an insect only found on the Polish coast.

Some 200 years after the retable was painted, Henry VIII ordered it, and all other such idolatrous objects belonging to monasteries, destroyed in his effort to wrench the English Church from its ties to Rome. The retable was saved from destruction by the Howard family, Dukes of Norfolk, and may have been installed in a private chapel, but then it vanishes from the pages of history until 1778 when it was put up for auction but astonishingly, failed to sell.

It completely disappeared after the auction and its whereabouts were unknown for almost 150 years, until in 1927 it turned up in the loft of stables belonging to Lord Henniker of Thornham Hall, Suffolk. Lord Henniker donated the retable to the nearby church of St Mary in Thornham Parva, where it was installed behind the high altar. 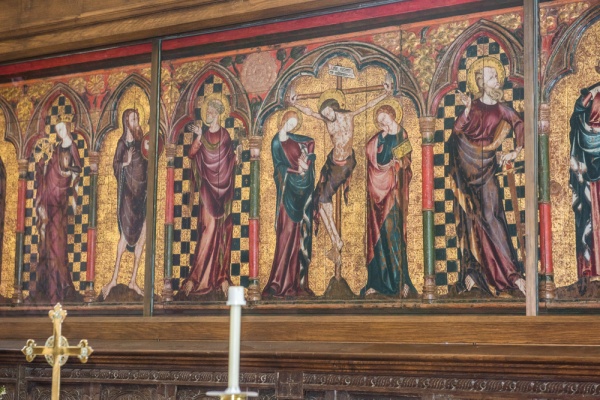 The Thornham Parva Retable is the largest and most complete medieval altarpiece in Britain. In 1994 it was removed for an exhaustive 8 year restoration project at the Fitzwilliam Museum in Cambrdge, but in 2003 it was returned to St Mary's Church.

It is remarkable that the retable survived in such glorious condition, but even more remarkable that it can be seen in the quiet country church of Thornham Parva rather than in the Victorian and Albert Museum or a similiar high-profile venue.

This truly is one of the finest pieces of medieval art in the UK and an absolute joy to view 'in situ', as it was designed to be seen, though not in its original location. The retable is protected by alarmed glass, which can sometimes introduce reflections that make viewing a challenge, but it usually only takes a little shift to one side of the other to escape the reflections.

The retable stretches 12 feet in length, and is in a triptych format, with 8 panels painted with figures of saints, grouped around a large central panel of the Crucifixion. The central panel shows Christ on the cross with the Virgin Mary and St John the Evangelist. Completing the central portion of the triptych are panels depicting Saints Peter and Paul. 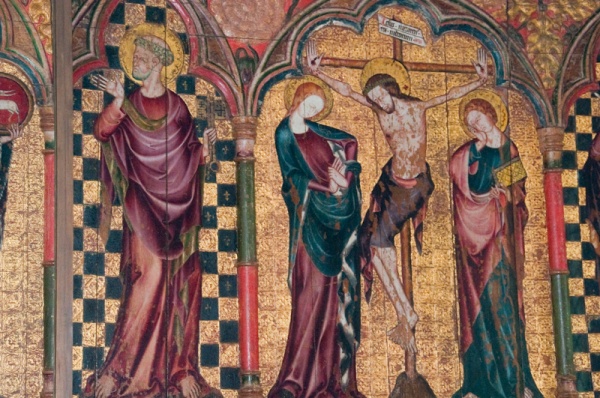 The Crucifixion, from the Thornham Parva Retable

To the right are three panels depicting St Edmund, St Margaret of Antioch and St Peter Martyr, and to the left are St John the Baptist, St Catherine and St Dominic. Each figure is painted within a cusped pointed arch, against a complex background. The arch spandrels are embellished with leaf decoration and roses. The overall effect is simply stunning.

Under the retable, lining the east wall of the chancel, are beautifully carved panels from a 17th-century pulpit, replaced with the present pulpit in a 19th-century restoration. Above the retable is the large east window, with fragments of medieval glass in the top section.

Of course, there is much more to St Mary's than the retable, and even if it did not exist it would still be worth visiting the church, even if just to enjoy the leafy setting. It is no wonder that St Mary's is so peaceful, for it is completely surrounded by fields. 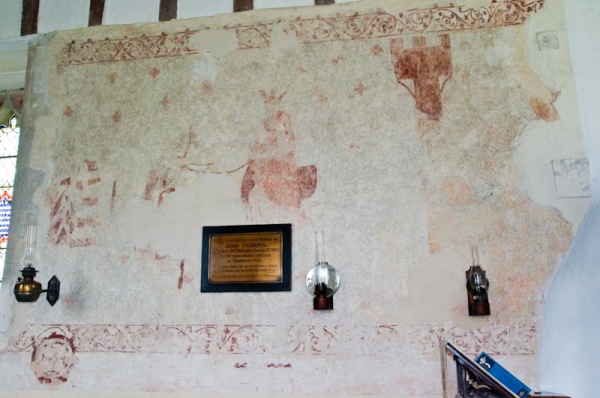 The martyrdom of St Edmund on the south wall

The isolation is emphasised in the fact that St Mary's has no electric lights and the only illumination is by oil lamps.

St Mary's is a magnificent historic building, though it is small, even unobtrusive. The entire structure is thatched, even the pyramidal tower roof.

The church we see today is Norman, though you can discern traces of Saxon stonework in the walls. St Marys was recorded in the Domesday Book of 1086, when it served not only Thornham Parva but the neighbouring village of Thornham Magna as well. Parva owned two-thirds, while Magna had the remaining third, suggesting that the Parva village was the larger and more important.

You enter through a low, narrow Norman door in the north wall and find yourself almost under the overhang of a 19th century west gallery. On the west wall, over the gallery seats, are painted panels depicting the Creed and Lord's Prayer, and under the gable is a round Saxon window with a typically deep splay that shows how thick the tower wall is. Under the gallery is a simple octagonal 14th-century font on a pedestal, with traceried faces. 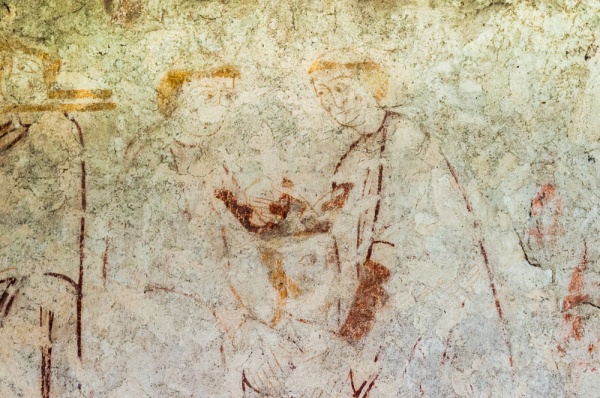 Monks putting St Edmund's head back on his body

As you step into the church you see the other major historic treasure; a series of 14th century wall paintings taking up most of both walls. The south wall is covered by a sequence of paintings detailing the martyrdom of St Edmund, the patron saint of England before St George.

The sequence of paintings is almost unique in England. The painting depicting the martyrdom itself was destroyed when a later medieval window was inserted. The most striking scene shows monks putting Edmund's decapitated head back on his body. You then see the saint's body being transported to its place of burial at Bedricsworth (Bury St Edmunds).

Watching the scene is a wolf who, according to legend, found and guarded Edmund's head. In the final scene, the cart carrying the body crosses an impossibly narrow bridge, foiling pursuit by Vikings.

Thornham Parva stood on a major route for pilgrims travelling from the coast to the shrine of St Edmund at St Edmundsbury Abbey. The narrow bridge may represent an actual part of the pilgrim's journey from Thornham to Bury.

On the north wall opposite are scenes from the Nativity, though late medieval windows cut into parts of the scene. A decorated border runs along the top and bottom of the paintings. The Nativity itself is over the north door, while the Annunciation is hidden behind the gallery. You can clearly make out the figures of angels telling shepherds the miracle of Christ's birth, and in the final scene, you see the Adoration of the Magi. 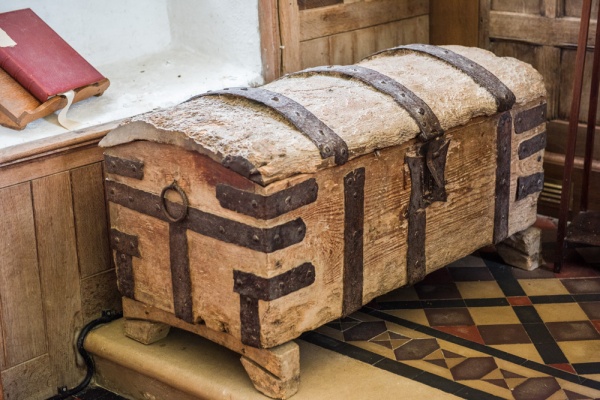 At the entrance to the chancel is a partly restored 15th-century oak screen, with some extremely fine fretwork on the top. Another historic treasure is a 1640 Bible displayed in a glass case by the door.

In the chancel is an ancient iron-bound chest, probably 14th century. Nearby is a nicely carved 17th-century chair. There are very few notable memorials, but set into the chancel floor is a 1681 grave slab to a member of the local Bokenham family, with the family's coat of arms at the top.

In the churchyard is the grave of celebrated Scottish architect Basil Spence (1907-1976), whose most famous design was the reconstruction of Coventry Cathedral following its destruction by bombing in WWII.

Thornham Parva's little church is one of the most enjoyable and historically interesting churches in England. It is an absolute gem and a joy to visit. I've been twice, and can highly recommend it. The church is normally open daylight hours to visitors. 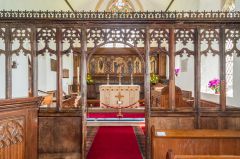