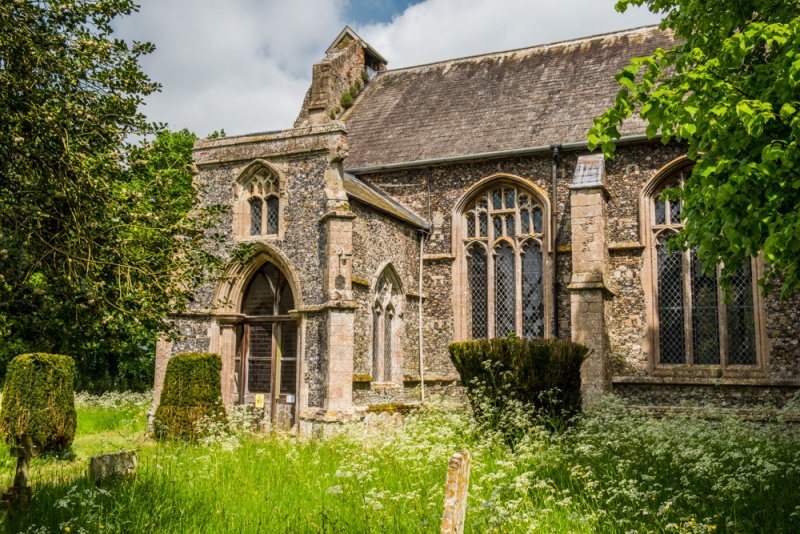 Mellis church stands in an idyllic rural location well outside the village centre, on the large common traditionally used for communal grazing purposes. The church dates to the 13th century but stands on the site of a much earlier building, probably the one mentioned in the Domesday Book of 1086.

The common is peaceful now, but it was not so peaceful in 1644, when the local men were mustered by Parliament to train for conflict in the civil war with King Charles I. The training did not go well, for 5 men were accidentally shot, including an unlucky man from Thrandeston who died after being 'shot through the bowells'.

Though the church began in the 13th century, much of the present building is 15th century. It originally had a west tower, but this collapsed in 1730. It was never replaced, and the stone was re-used to build a raised path across the common known as The Carnser. Some of the stones were sold to raise money to repair the church roof, and some to build a tenement for the poor of the parish. 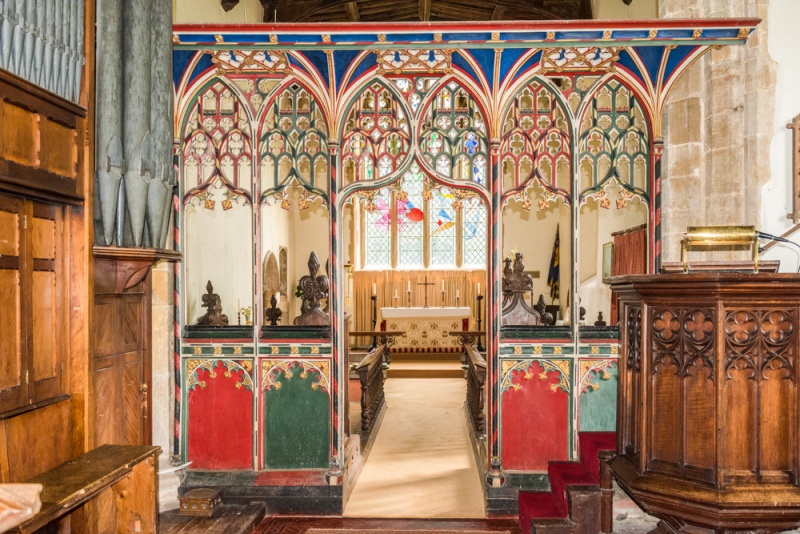 In place of the tower is a small bellcote over the west gable, in which hangs a single bell, cast in 1626 in Colchester. It was made for Thwaite church, and brought to Mellis in 1859.

One interesting feature that you don't see often is a blackout blind-roller over the south window. These were used during WWII to avoid any glimmer of a light escaping during services. This was especially important in an area like north Suffolk, where there were many military airfields in use.

At the west end of the nave is a blocked tower arch. In the arch is a fascinating door in Saxon style, with a round arch and the remnants of an iron wedge for sealing the door. The door is clearly older than the stone that blocks the arch, but what is it doing here and where did it come from? 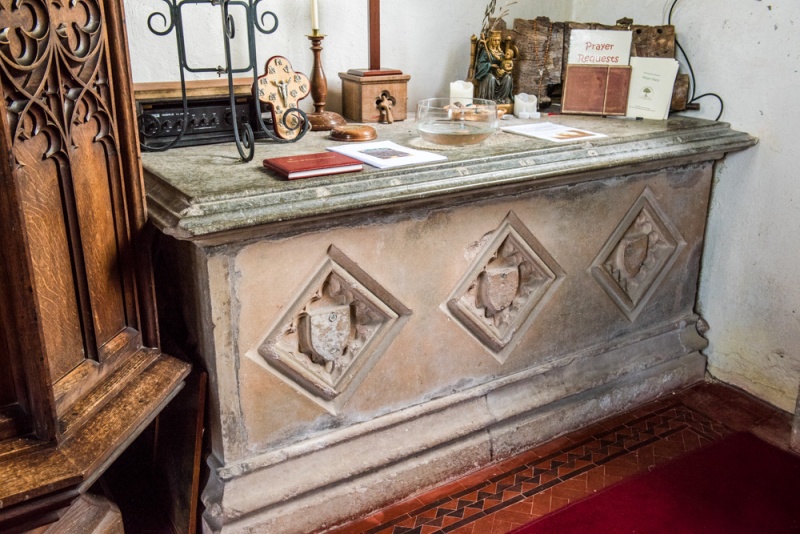 Over the arch is a painted royal coat of arms to Charles I, dated 1653. It is an interesting date, for Charles was dead by that time, and the country in the grip of Cromwell's Commonwealth. The Mellis coat of arms is one of only five to Charles in all of England.

At the west end of the nave is a beautifully carved 15th-century octagonal font in typical East Anglian style, with four lions supporting the stem and the bowl carved with symbols the Evangelists alternating with Tudor roses. If you look closely at the base panels you can see traces of the original medieval paint.

The nave roof is 15th century, supported on stone corbel heads carved with figures of angels holding shields and musical instruments. Though most of the benches date to restoration in 1858 many of the medieval bench ends were re-used, including several poppyhead ends.

Fragments of medieval stained glass are gathered in the south-east nave window, where you can make out figures of St James the Less and St Jude. Against the east wall of the nave is a 16th-century altar tomb. There is no inscription, but it may commemorate John Yaxley, Serjeant at Law, who died in 1505.

One of the best historic features is the 15th-century rood screen under the chancel arch. Though the screen has been restored, most of the intricate woodwork is original. The painting was carefully retouched in 1900 by one of the daughters of Revd. Henry Creed, using the original colour scheme. Look for tiny figures of dragons and faces hidden in foliage, some with their tongues sticking out.

There are more poppyhead bench ends in the choir stalls and the rails surrounding the stalls date to 1637. The communion table is early 17th century, and against the north chancel wall is a beautifully carved easter Sepulchre under five vaulted canopies. Set into the chancel floor is an 18th-century ledger slab to members of the Clarke family, who lie buried in the family vault beneath the slab. In the vestry is a 15th-century parish chest.

There are few interesting memorials, but in the nave is a war memorial to men of the parish who died in both World Wars, and a touching plaque to a daughter of the rector who died during WWI.

We very much enjoyed our visit to Mellis church; the location is simply wonderful, and the church is full of historic interest, in particular the restored 15th-century screen. 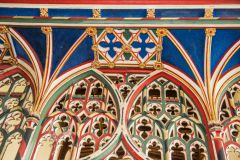 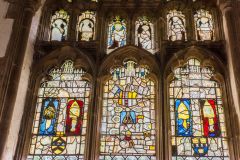 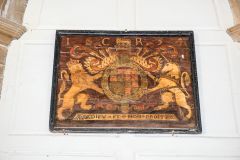