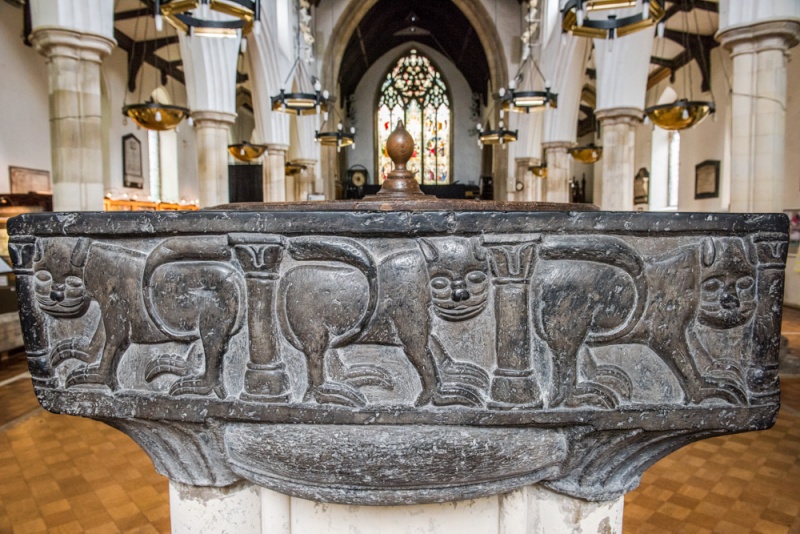 There has been a church on this site close to the River Orwell since at least the late Saxon period. There was a church mentioned in the Domesday Book of 1086. At that time the river was much wider than it is today, and the church probably stood by the water's edge. Now it overlooks a bust traffic roundabout. 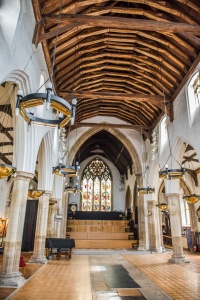 The Saxon church was probably built to greet travellers arriving at the river crossing on the main road from Colchester and London.

In 1130 an Augustinian priory dedicated to SS Peter and Paul was established to the east and north of the church. The priory canons prayed in the chancel, and the nave was reserved for parishioners.

Perhaps the most important event in the medieval history of the parish came in 1297 when Edward I brought his daughter Margaret here to marry John, Count of Holland. There seems to be some uncertainty whether the marriage took place at St Peter's or at nearby St Mary's at the Quay.

The church was completely rebuilt around 1460, at a time when Ipswich, like so many towns in East Anglia, was at the height of its prosperity as a result of the booming wool trade. It is one of the oldest buildings in Ipswich. 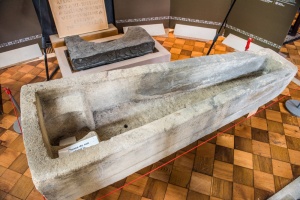 In 1527 Cardinal Wolsey, a native of Ipswich, closed the priory and seized the site to build a new school, to be known as the Cardinal College of St Mary. Wolsey's school was to be one of a dozen 'feeder' schools sending promising pupils to Christ Church, Wolsey's new college at Oxford.

The school began to take in students before the buildings were begun, but the whole project fell apart when Wolsey fell from power. All that remains of the school is the Wolsey Gate, just outside the churchyard. The Gate was intended as a ceremonial entrance for visitors arriving by river, another reminder of how close St Peter's once stood to the waterway.

Several other architectural features of the church remind us of Wolsey's presence, including the finely carved canopied niches flanking the west door, created in 1528.

As for the intended site of the school, it was granted by Henry VIII to Thomas Alvard, a member of the royal household.

In the early 19th century one of the first Anglican Sunday Schools was founded here by the Reverend Edward Griffin, a popular preacher and an important figure in the Evangelical Revival.

The church was made redundant in 1979 and is now in the care of the Ipswich Historic Churches Trust.

In 2008 the church was completely restored by the Ipswich Historic Churches Trust. The east end of the building is used for musical performances and practices, and a raised stage has been installed where the high altar once stood.

Several local bands meet here regularly, and community groups can hire the space for conferences, workshops, and theatre productions. The west end of the church has been converted into a heritage centre, with information about the history of Ipswich and the church, as well as the town's links to Cardinal Wolsey. 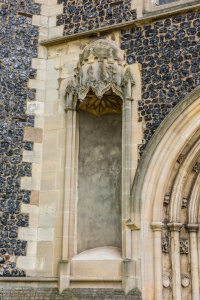 Though it is a shame that St Peter's, like so many other town centre churches, had to be made redundant, it is good to see the space being used. The heritage centre is fascinating, and much remains from the medieval building that Wolsey would have known.

The church we see today is largely 14th-15th century, with a 15th-century porch and an aisled nave. The chancel is early 15th century, extended in the late Victorian period. The striking west tower is built of knapped flint and is braced by diagonal buttresses.

By far the most interesting historic feature is a 12th-century font of lustrous black Tournai marble set upon a 15th-century base. The square bowl is beautifully carved in relief with figures of a dozen lions. Lions were a common decorative motif for Tournai fonts, and are found throughout Europe. The font dates to the reign of Henry II (1170-1190) and is almost certainly the original priory font.

Nearby is a medieval stone coffin found during construction of the vestry in 1904. On the wall near the font is an exceptional memorial brass to John Knapp (d. 1604), and his wife Martha. on the wall is a funeral hatchment to the Trotman family.

One of the more modern exhibits is the Ipswich Millennium Charter Hangings. The Charter Hangings age a series of 8 tapestry panels made to mark the 800th anniversary of King John's royal charter granting Ipswich borough status. Each panel depicts major events across 8 'ages' of the town's history from the Viking period to the modern day.

The heritage centre is open 4-5 days per week from during the summer months and one day per week the rest of the year. It is located at the junction of College Street and Greyfriars Road, a short stroll from the waterfront and very close to St Mary at the quay church to the east. 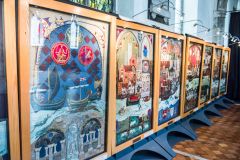 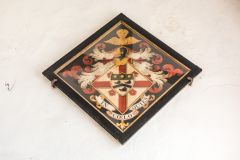 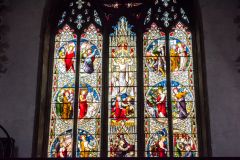 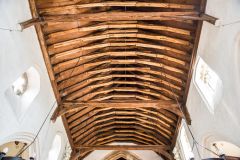 Nearest Accommodation to Ipswich, St Peter's by the Waterfront:

More self catering near Ipswich, St Peter's by the Waterfront

More Hotels near Ipswich, St Peter's by the Waterfront

More bed and breakfasts near Ipswich, St Peter's by the Waterfront