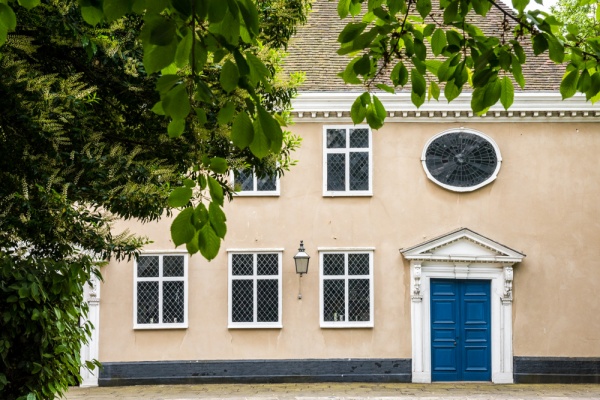 In the heart of modern Ipswich, surrounded by office blocks and bounded by busy streets, stands the historic Unitarian Meeting House, one of Ipswich's hidden delights. This historic building boasts an interior almost untouched by the passage of time, and full of superbly carved woodwork, galleries, and box pews. 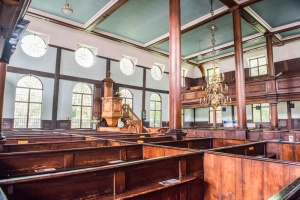 The story of the Unitarian Meeting House begins with the Act of Uniformity in 1662. The Act effectively ousted clergy who would not adhere to the Church of England form of worship. Since these clergy would not conform to C of E observance, they were termed 'Nonconformist'.

Ipswich's Nonconformists came largely in two flavours; Presbyterians and those who would later became known as Congregationalists. The Nonconformists worshipped in rented rooms for several decades, but relief came in 1689 when the Act of Toleration permitted Nonconformists of all persuasions to build their own places of worship.

With the help of a wealthy London merchant named Thomas Firmin, the Presbyterian congregation began to build a meeting house on Friars Street. Work did not begin until 1699 and the new building was open for worship in 1700. Why the delay? The Presbyterians were still hopeful of reconciliation with the Church of England and even after the Meeting House was completed their clergyman, John Fairfax, said 'Had we the liberty of those places [Anglican churches] we would seek no other'. 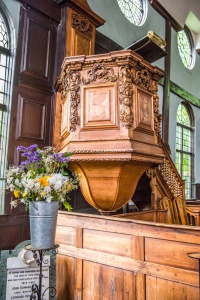 Worship in the early 18th century must have been rather grim. The service followed a strict Puritan format, with no music, and no toleration for laughing or talking. The congregation was separated on gender lines, with men on the ground floor and women in the galleries above. One of those who worshipped at the Meeting House was artist Thomas Gainsborough, a Suffolk native. Soldiers from the Royal Scots Greys from the Ipswich barracks also attended.

The form of worship gradually evolved over the course of the 18th century, and under the influence of preachers like Thomas Scott the meeting moved towards a more open Unitarian style of observance.

The Meeting House is set back from Friar's Street, with trees framing the simple, fairly plain exterior. You could be forgiven for missing the Meeting House entirely, so unpresumptuous is its exterior.

The property where the Meeting House now stands was purchased on 5 August 1699 for £150. Construction took just 6 months and cost £256 14s 6 d, plus another £96 for the galleries. The double hipped roof is supported by 4 timber columns, thought to have been made from ship's masts. There are three doorways, each with an elliptical lunette above. The leaded glass is mostly original. 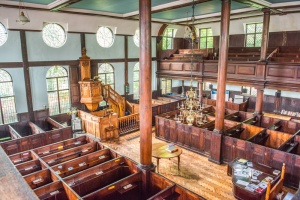 Looking down from the gallery

The interior is dominated by the large pulpit in the middle of the south wall. The pulpit is either carved by the master woodworker Grinling Gibbons or by one of his best pupils. It is a superb example of early 18th-century craftsmanship. Gibbons' association with the Meeting House woodwork has led to speculation that Sir Christopher Wren, his frequent collaborator, may have been involved with designing the Meeting House.

In the central space below the pulpit is a communion table, and crowded round are high-backed box pews made of pine, while galleries rise on three sides. The box pews are typical of late 17th century woodwork. The pews were rented out to families, and the pew rent was a major source of income for the congregation. Some of the family pews retain their original 17th century locks, and many have pegs for hanging wigs during services.

You can climb to the gallery level, though the floor creaks ominously as you explore the galleries, and you wonder if the whole is about to collapse beneath you (it isn't).

By contrast with traditional Anglican churches the windows are filled with clear glass. There is a large chandelier in Dutch style, and an ancient clock in the north gallery that is older than the building itself. The organ was built in 1878.

One fascinating feature is a small spy hole hidden by a brass plate in the east wall. The spy hole offers a reminder that religious toleration was not widespread when the Meeting House was built, and worshippers had good cause to be fearful.

When I visited I was the only one there apart from a friendly volunteer. She told me that the meeting house gets few visitors; even people who have worked in the office building next door for decades aren't even aware of the Meeting House. Well, that's their loss, for this is one of the most intriguing historic buildings in Ipswich, a wonderful example of late 17th-century architecture and a delight to visit.

The Unitarian Meeting House is open several afternoons each week during the spring and summer months. 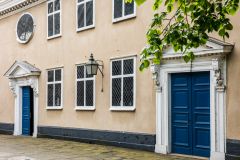 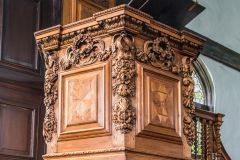