HERITAGE HIGHLIGHTS:   Last remnant of a school founded by Cardinal Wolsey in 1528 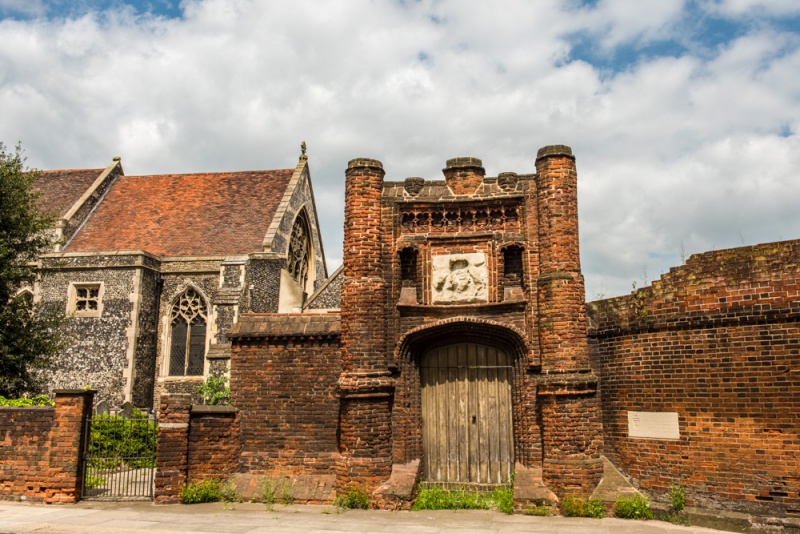 College Street runs parallel to the historic waterside in Ipswich, and joins the busy A1022 at the north end of Bridge Street. It is one of the busiest intersections in the centre of Ipswich. How many of the drivers that roar along the street pause to regard a worn gateway of red brick, standing at the south-east corner of St Peter's-by-the-Waterfront church?

The gateway is the only obvious reminder of a school founded by Thomas, Cardinal Wolsey, a native of Ipswich who rose to become the most powerful man in the kingdom under Henry VIII. 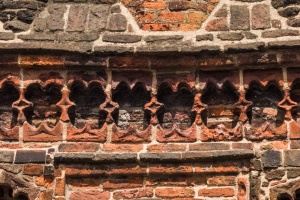 Decorative brickwork over the arch

In the 12th century, an Augustinian priory was established on the north bank of the River Orwell. The canons of the Priory of SS Peter and Paul used the church of St Peter, which had been founded as early as the late Saxon period at the north end of a ford across the river.

The priory occupied a large area of land, but it was land that eventually attracted the eye of Thomas, Cardinal Wolsey. Wolsey was interested in education and evolved a grand scheme to establish a network of a dozen schools around the country to prepare students for his new foundation of Cardinal College in Oxford (now Christ Church College).

One of the 12 'feeder' schools was to be established in his home town of Ipswich. It was meant to rival older schools like Eaton or Winchester School, and provide a wide pool of talented students to attend Cardinal College.

Wolsey was used to getting his own way. He forced the priory to close and seized the land. He got permission from the king to establish a school, and construction began near St Peter's church in 1528. Students were taken on, and professors were hired. The new school head was William Golding, lured away from Eton. St Peter's church was rebuilt to serve as the school chapel and the congregation forced to use St Nicholas or St Mary at the Quay churches in neighbouring parishes. 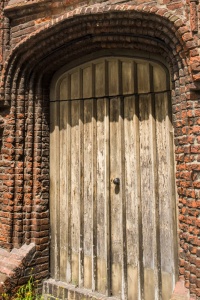 Wolsey's Gate was built to serve as a ceremonial gateway for visitors arriving by river. In Tudor times the River Orwell was much wider than it is now, and the gateway and neighbouring churchyard must have stood near the water's edge. The 'Water Gate' as Wolsey would have known it, led directly to the river.

Unfortunately for Wolsey - and his school - its foundation coincided with Wolsey's fall from power over his failure to secure papal approval for Henry to divorce his first wife, Catherine of Aragon. Wolsey was removed from office, then arrested for treason, but died before he could be put on trial. Construction of the school ground to a halt.

In 1532 all the remaining building materials, including timber, lead, and stone, was transported to London where it was used to extend Wolsey's former home of York House, which later became Whitehall Palace.

Headmaster Golding stayed on in Ipswich; his salary was even paid by the crown, on the instigation of Thomas Cromwell, Wolsey's former protege. The grammar school moved premises to Foundation Street, and formed the basis of what would later become Ipswich School. The school was endowed with money from the dissolution of local monasteries, and its charter was renewed by Henry VIII and again by his daughter Elizabeth I. The Foundation Street site is now occupied by a car park.

The gateway stands in an area of the town that has been undeveloped and run down for a long time, and it is an ongoing concern over how the Borough Council can make the most of the gateway's historic value and encourage visitors. As it is now the best vantage point to view the gateway is from across College Road, which can be dangerously busy and difficult to cross at some times of day. 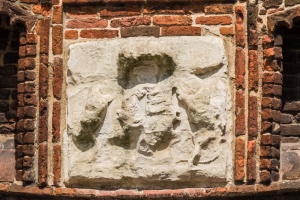 The very worn coat of arms

Local residents occasionally raise the question of moving the gate to make it more easily accessible and to prevent vandalism. They have a point about the latter question, for in 2012 vandals spray-painted the rear of the gateway with graffiti, which had to be very carefully removed from the porous Tudor bricks.

It seems very unlikely that the gateway will ever be moved; it is a scheduled ancient monument and getting approval from all the concerned bureaucracies would be extremely unlikely, not to mention the chance of damage to the gateway from attempting to move it.

The gateway consists of two short sections of brick wall supporting a pair of turrets, joined by a horizontal lintel, decorated with brickwork in the style of blind arcades. Under the lintel and flanked by niches is a very worn coat of arms in white stone. The coat of arms has suffered greatly from the passage of time, and no doubt from the automobile fumes that constantly bombard it.

Under the coat of arms is a broad Tudor arch and a doorway with multiple layers of moulding. The effect is pure Tudor theatre, though very restrained by Wolsey's standards. One wonders what the main gates of the school would have looked like if this was a simple water gate?

More self catering near Wolsey's Gate