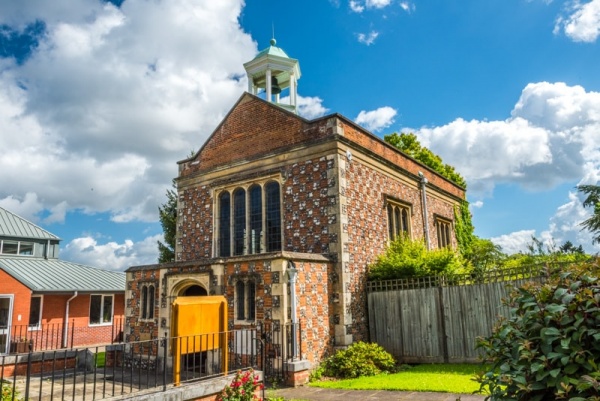 Somewhat hemmed in by modern housing and the parish church and vicarage is this early 17th-century chapel, built to serve nearby Oxhey Hall. The builder was Sir James Altham, who chose a site formerly occupied by a medieval monastery.

The story of Oxhey Chapel really begins in the year AD 793 when the first monastery and church were established at Oxanehaege. The place name gradually morphed over the centuries to Oxenage and eventually became Oxhey. The Saxon name meant a place where oxen were kept.

The Oxhey estate was one of three given by the powerful King Offa of Mercia to the monks of St Albans. According to legend Offa was moved to donate the estates and found the monastery as an act of atonement for killing Ethelbert, King of the East Angles, in AD 757.

The monks of Oxhey were driven out by a Viking attack but returned in 1007 and rebuilt their ruined monastery. King Ethelred the Unready confirmed Offa's charter in the same year.

In 1529 Oxhey was among the first minor monasteries to be dissolved by Henry VIII. The monks were forced to leave the land and the monastic buildings were demolished.

In 1604 James Altham, Baron of the Exchequer under Elizabeth I and James I, bought the Manor of Oxhey. Altham built Oxhey Place Hall on the monastery site. In 1612 he added a family chapel on the foundations of the monastic church. The chapel was a private place of worship for the Altham family, staff, and servants.

The building is crafted of alternating squares of flint and brick, creating a lovely, subdued chequerboard pattern. The chapel was damaged by Cromwell's men in the Civil War. The Parliamentary soldiers used the chapel as a storehouse and stripped the roof of lead to make musket balls.

In 1688 Sir John Bucknall, then lord of Oxhey Manor, rebuilt the manor house and restored the Chapel. He blocked the eastern doorway and installed the stunning altarpiece using fine woodwork removed from the old manor house.

In 1704 the chapel was re-roofed with a hipped and tiled roof, and a bell-cote was added. The interior was restored again in 1712 and the altarpiece was whitewashed to brighten the chapel interior. 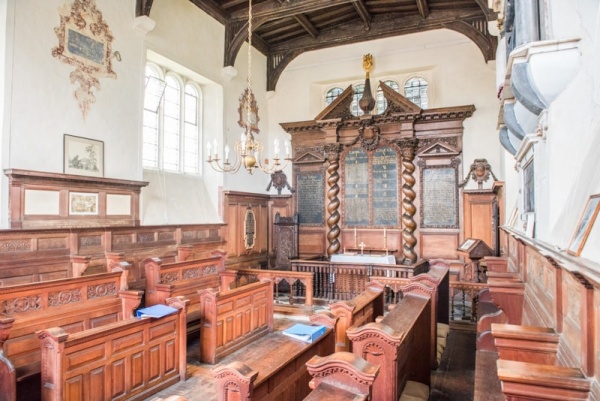 In 1852 Thomas Bucknall restored the chapel, removed the old pews and pulpit, and thankfully removed the whitewash from the altarpiece, revealing the stunning woodwork once more. Services were led by the vicar of Watford until 1880 when the new church of St Matthews was built nearby and Oxhey gained its own parish priest.

In 1897 Thomas Blackwell (of the famous Crosse & Blackwell company) used Oxhey Chapel as a private family chapel. He called in London architects JEK and JP Cutts to add the western porch and a pair of small vestries. They also unblocked the northern windows and installed new seating made of teak. In 1954 the new church of all Saints was built directly beside the Chapel, on the site of the original monastery.

There was another restoration in 1963 when the hipped roof was removed and the tiles sold to the famous violinist Yehudi Menuhin. The Chapel was finally declared redundant in 1976.

The chapel is a lovely time-capsule of 17th-century taste, with unrestored architecture and fittings. There is some residue of the late Victorian renovation, but for the most part, what you see is what Sir James intended.

The west door, roof, chancel tiles, communion rails, and font are all 17th century. The exquisite font is a stunning piece of woodcarving, as is the wooden cover. The communion rails are original 17th-century work.

There are two memorials; one to Sir James Altham (d. 1616) and his wife Helen (d. 1638). The effigies of the deceased are arranged so that they kneel, facing each other. Sir James is dressed in his robes of office as Baron of the Exchequer. Near the Altham memorial is another to John Astell Bucknall (d. 1796). The epitaph describes him as 'an ornament to his friends and the protector of his neighbours'. Under the Bucknall memorial is a brass plaque commemorating the 1612 construction of the Chapel. 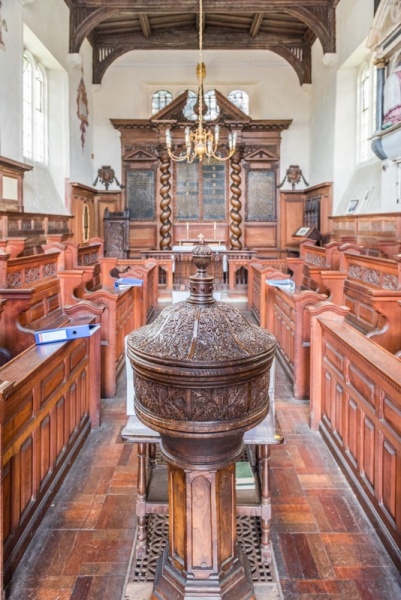 Looking down the central chapel aisle

The fabulous reredos dates to 1688, built by reusing wood from Oxhey Hall. It is designed with twisting columns beneath a broken pediment. Beneath the pediment is a panel inscribed with the Ten Commandments, and on flanking panels are the Lord's Prayer and the Apostles' Creed. Beside the altar is an ornately carved chair brought from St Albans Abbey. On the walls, you can see traces of wall paintings depicting Biblical texts within cartouches.

On the north wall is a copy of King Ethelred's Charter of 1007, confirming the monk's ownership of the land at Oxhey. The original document is held in the Bodleian Library in Oxford.

The chapel is not used for regular worship and is cared for by the Churches Conservation Trust. The key can usually be obtained from the parish church office. The man who found the key for us gave us a wonderful potted history of the Chapel and pointed out the historical highlights. 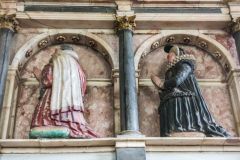 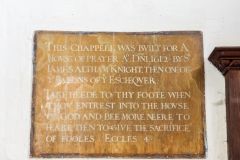 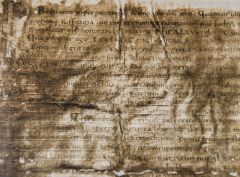 More self catering near Oxhey Chapel >>