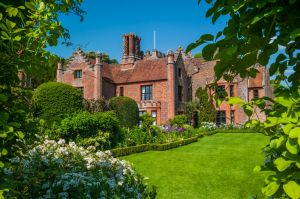 Chenies is a gabled manor house begun in the 15th century, with 16th-century alterations. Once the home of the Russell's, Earls of Bedford, there are several unusual architectural features, including a secret hiding hole, a medieval undercroft, and a collection of antique dolls.

In the reign of Edward I Chenies was a simple hunting lodge, a place for the nobility to get away from the pressures of court life and enjoy rustic pursuits. It took the ambition and political astuteness of one man, John Russell, to turn Chenies from a secluded country house to a fortified manor, suited to hosting the royal court.

John Russell was a man of his times, a Tudor courtier, statesman, and man of political intrigue. He joined Henry VIII's royal court in 1523 and devoted the rest of his life to service of the crown. His reward was a peerage, an honour his descendants would later turn into a Dukedom. 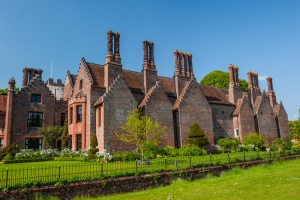 The rear of the manor house

The foundations for an upturn in the Russell fortunes came in 1526 when John Russell married a wealthy heiress, who brought the Chenies estate to the marriage as her dowry. Russell set about transforming the medieval hunting lodge into a house fit for the royal court.

Henry VIII visited on several occasions and was sufficiently impressed with the renovation of Chenies that he commissioned the same builders to work on Hampton Court Palace when they finished at Chenies.

In 1541 Henry came on a visit with Catherine Howard, his fifth wife. Catherine was - rather foolishly as it turned out - carrying on an affair with a member of the court retinue, Thomas Culpepper.

We do not know for certain, but it was possibly at Chenies that Archbishop Cranmer's secret informers gathered evidence of Catherine's infidelity, evidence that resulted in her execution for treason only a few months later. It is said that Henry's halting footsteps can still be heard echoing down the corridor leading the room Catherine occupied during her stay. 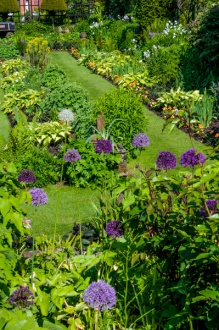 Like her father, Elizabeth I visited Chenies several times. Her bedroom was later converted into a billiard room. This was perhaps the high point for Chenies; it was at the centre of political life and enjoyed royal patronage. But after Elizabeth's death, the house fell upon hard times.

Parliamentary troops used the long gallery as a barracks during the Civil War. Then Francis Russell the 4th Earl of Bedford, moved the family seat to his new house of Woburn Abbey, in Bedfordshire.

Curiously, the lovely medieval church at Chenies remained the burial place of choice for generations of Russell dukes and their families, and today the Bedford Chapel is one of the finest family chapels in England.

The manor dwindled in importance and was let out as a farmhouse. Horace Walpole, visiting in 1750, said that it was 'in piteous fragments', and a surveyor recommended that the entire structure should be pulled down. 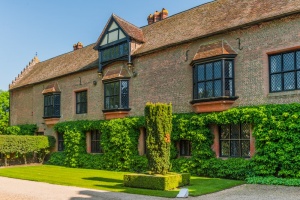 Though parts of the house were indeed dismantled, most was saved, and the glorious Tudor gatehouse and Henry VIII wing were restored. In 1829 Edward Blore modernised the house for the Russells, but since then it has remained blessedly unaltered.

The house that greets you as you pass through the Tudor gatehouse is L-shaped, with the entrance at the meeting of the wings. Within, the main ground floor room is the parlour, graced with a lovely beamed ceiling and warmed by a wide fireplace.

Over the mantle is a coat of arms carved from a tree blown down on the estate in the Great Storm of 1987. Many of the downstairs rooms are filled with Georgian and later furniture, though much of the decor has its roots firmly in Tudor times.

The effect is wonderfully warm and welcoming; this is very much a family home, not a museum showpiece. Upstairs are atmospheric bedchambers, including one with a secret hiding hole under the floorboards of a cupboard. Then there is the long gallery, with exhibits on the family's long history at Chenies. 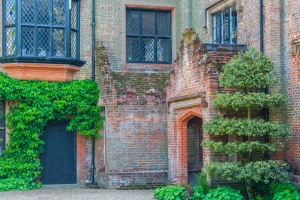 Though the historic interiors will draw most people to Chenies, the house is set in quite wonderful gardens, which deserve special mention. There are several garden areas, with a mix of wide lawns, with a summer house, a kitchen garden, formal gardens, a medicinal garden, and a restored well-house.

And then there is the church, with the Bedford Chapel (sadly this is usually closed to visitors, but you can look through the clear glass into the chapel interior and get a very nice view of the Russell memorials.

Visits to the house are by timed tour only. We had a wonderful tour guide, who really helped make the history of the house come alive. I expected to enjoy the house, but I hadn't expected to enjoy the garden as much as I did; it is truly wonderful, full of rich colours in summer. In one garden area is a recreation of a turf maze, popular in the medieval and Tudor period. Chenies is truly one of the great English manor houses, an absolute delight to visit, set in a picture-postcard village.

Note: Sorry there are no photos of the interiors; as a family home photography was not allowed indoors, so I had to content myself with lots of exterior views!

Garden: An intriguing mix of historical garden styles surrounding a 15th-century manor. There are Tudor gardens, a hedge maze, a physic garden, and a Victorian kitchen garden to visit. 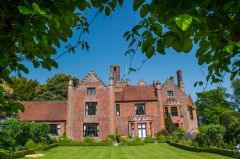 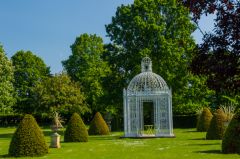 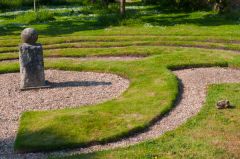 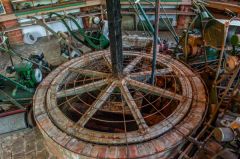 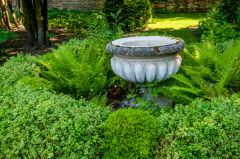