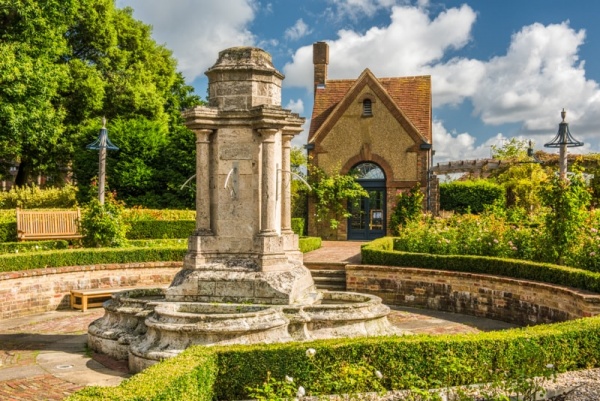 Bushey Rose Garden is a delightful early 20th-century garden on the site of a former art school. The garden was designed by Thomas Mawson for the eminent Victorian artist Sir Herbert von Herkomer as part of his grounds. Sir Herbert's house is long gone but the gardens remain.

During the late 19th century Bushey was home to several influential painters. In 1883 one of these artists, Sir Herbert von Herkomer (1849-1914), founded the Herkomer School of Art. The school developed a high reputation and counted amongst its students Sir William Nicholson (1872-1949).

He eventually grew tired of running the school and closed it in 1904. The following year one of his former students named Lucy Kemp-Welsh reopened it as the Bushey School of Painting, focussed on teaching animal painting. 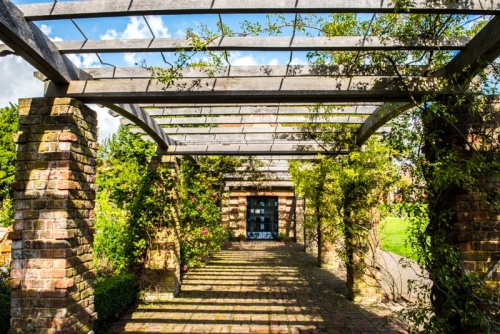 That second art school ran until 1912 when Herkomer repurchased the property and tore down the buildings. He wanted to create a new garden and incorporate it into the gardens of Lululaund, his home on Melbourne Road, adjoining the property. The house, named for his deceased wife Lulu, was designed by American architect HH Richardson as a 'Bavarian Castle'. All that remains of the house is a small section of the front elevation.

Herkomer called upon the prominent landscape architect Thomas Mawson to design the new garden. No money changed hands; in exchange for the garden design, Herkomer agreed to paint Mawson's portrait. Mawson recorded in his journal that Herkomer proposed the exchange by saying,

'Let's swap. I’ll do your portrait, whilst you design my rose garden, and we’ll call it quits.'

Mawson agreed and both parties seem to have been pleased with the bargain. The pair seems to have hit it off; Mawson wrote in his autobiography that he and his patron were 'drawn closely together' during the project. Mawson must have liked the portrait; he used it for the frontispiece of his autobiography.

Mawson went on to design parks and gardens around the world and served as President of the Landscape Institute. Some of his most enduring designs were at Rydal Hall, Graythwaite Hall, Langdale Chase, Holehird, Brockhole & Holker Hall in Cumbria. 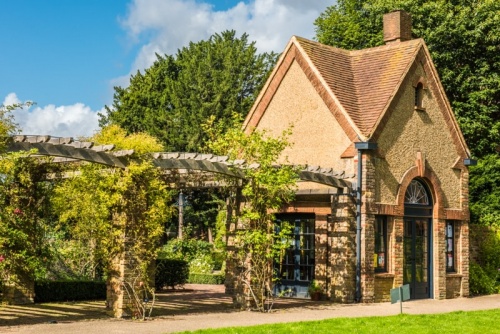 Abroad he worked in developing the Smokey Mountains National Park in the US and he designed the gardens for the Palace of Peace in The Hague. He also coined the phrase 'Arts and Crafts' to describe the style of garden popularised by Edwin Lutyens & Gertrude Jekyll.

In 1937 the Bushey Urban District Council bought the former rose garden and kitchen garden from the Herkomer estate after the death of Herkomer's third wife Margaret and opened it to the public.

Bushey Rose Garden was the subject of a massive restoration project in 2010, with over 1.5 million pounds spent to restore the gardens to their original state. 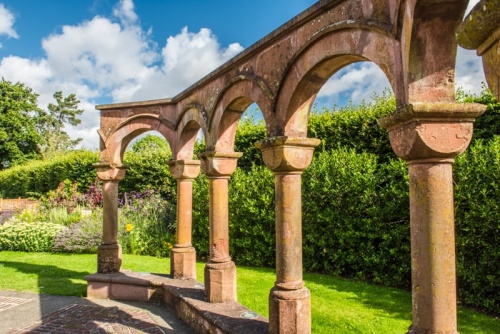 The rose garden stands on the north side of Bushey High Street (A411), near the junction of High Street and Melbourne Road, and is bounded by a 19th-century brick wall. Entrance is through a delightfully ornate set of 19th-century wrought-iron gates.

The garden is separated into two distinct areas. Nearest the High Street entrance is the formal rose garden, while the north side of the garden, away from High Street, is an area of lawns and shrubberies occupying the site of the former kitchen garden.

The gardens are a delightful period piece, a fascinating glimpse into the early 20th-century world. Many of the original garden features remain, including a sunken garden, a Rose Temple, a pergola, and a summer house that now houses an exhibition on the history of the gardens and the lives and careers of Herbert von Herkomer and Thomas Mawson.

The sunken garden is the focal point of the design, with an ornate fountain ringed by clipped topiary hedges at the centre. The design of the fountain and the pattern of pavement that surrounds it may depict Buddhist symbolism. Today the four fountain basins are planted with flowers. The formal garden also features variegated hollies and the box and yew hedges. 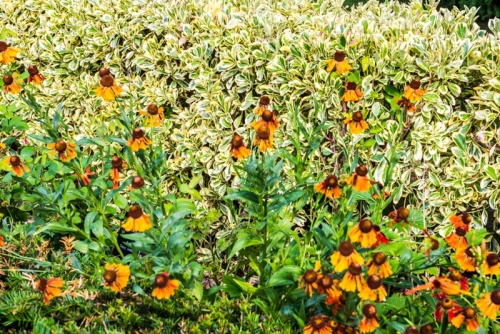 One unusual garden feature is The Cloisters, a series of red sandstone arches that are the only surviving remnant of the Art School building. Nearby is an Art Deco style bird bath.

The striking fountain is made of Bavarian tufa stone. The same stone was used to build Herkomer's home of Lululaund.

At one end of the pergola, planted with climbing roses and ivy, is a plaque commemorating the former house. It replaces a seven-foot plaque designed by Herkomer that was stolen in the 1960s. The pergola was built to link the rose gardens to the earlier gardens of Lululaund.

At the south-east corner of the site is a column designed by Mawson, which stands at the site of the entrance to Herkomer's art school.

The lawned area on the north end of the garden is edged by mixed borders and a beech hedge, with mature pines and laurel trees.

Bushey Rose Garden has been listed in the English Heritage Register of Parks and Gardens of Specific Historic Interest and several of the garden structures have been listed Grade II for their historic value.

The restoration included planting some 4,000 plants, many from Thomas Mawson's original plant specification. The plantings focus on roses and clematis and aim to create a garden with colour throughout the year.

There is no designated parking near the garden. We managed to find a public car park on the south side of High Street off Kempe Place, a 5-minute stroll to the west. The garden entrance is directly opposite the Bushey Golf Club clubhouse entrance. 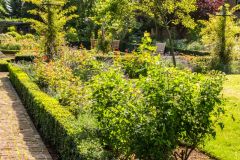 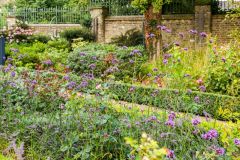 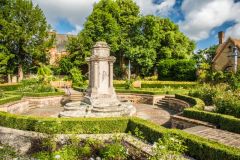 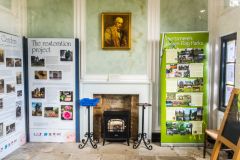 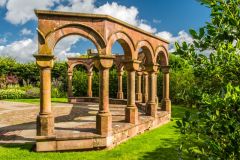 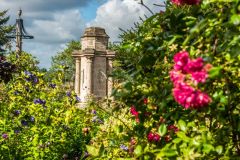