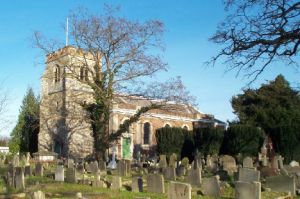 Little Stanmore, St Lawrence Church
A Baroque masterpiece of a church, erected by James Bridges, later the first Duke of Chandos, around 1715. Chandos rose from relative obscurity as the son of a Herefordshire squire to become one of the richest men in England. He just as quickly lost his fortune, but more on that in a moment.

Chandos gained the favour of John Churchill, 1st Duke of Marlborough, and was named to the post of Paymaster of the Forces Abroad during the War of Spanish Succession. At that time the Paymaster was free to invest or speculate with the money in his care (imagine the scandal if he tried that today!), and Chandos proved very adept at his monetary ventures.

When he resigned his post in 1713 he had amassed a personal fortune something along the lines of £60 million in today's terms.

Chandos set about rebuilding the medieval church at Little Stanmore, partly in order to provide a suitable venue for his own memorial. Only the tower was retained from the medieval church, and as for the rest, it became one of the highlights of English Baroque architecture, with opulent decoration and lushly carved design features.

In 1735 a special mausoleum for the Chandos family was created by James Gibbs. The centrepiece of the mausoleum is the massive memorial to Chandos and his two wives. The Duke is portrayed in Roman garb, in a suitably heroic pose.

The monument is thought to have been designed by Grinling Gibbons, best known for his decorative wood carving. The ceiling above the memorial is exquisitely ornamented, with profuse neo-classical plasterwork.

Another of the highlights of St Lawrence church is the organ, built in 1717, which was probably played by GF Handel, whom Chandos hired as his personal composer-in-residence. The enormous wealth amassed by Chandos was not to last.

Like so many of his contemporaries, Chandos invested heavily in the South Sea Company. When the 'South Sea Bubble' burst, Chandos and others like him lost their fortunes. But he left behind this extraordinary Baroque church, with its fantastic chapel, for us to enjoy.

The Chandos Mausoleum is in the care of the Churches Conservation Trust, and as of this writing, both the Mausoleum and the church is open to visitors on Sunday afternoons. Check the St Lawrence church website for details.