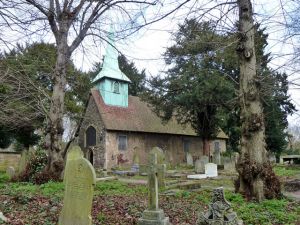 Kingsbury, St Andrew's Old Church
Likely the oldest building in the borough of Brent, Greater London, the redundant Old Church of St Andrew in Kingsbury probably predates the Norman Conquest, and Roman remains have been found on the site. The church stands in a treed area close by the Victorian church that took its place.

Despite the location, St Andrews has the feel of a country church. The church is the only Grade-I listed building in Brent, another sign of its great age and historical importance.

The church was probably built in the late Saxon or early Norman period, as a simple rectangular building. The walls are rubble faced with flint, with sarsen stones as quoins. Pieces of Roman tiles are embedded in the walls, as well as sherds of 11th-century pottery. This suggests that a Roman building site was robbed of stone to build the church.

Inside the church, several intact Roman hypocaust flue tiles have been set into the walls to hold candles. The presence of the hypocaust tiles suggests that the Roman site was a villa of some importance.

By the 13th century, the church was owned by the Knights of the Hospital of St John of Jerusalem, the religious order known more simply as the Hospitallers. Some Hospitallers moved to Kingsbury to grow food for the Priory in Clerkenwell. Their farm was called Freren Farm, from the French word freres, or brothers. During this time a priest's door and porch were added, and a scratch dial carved into the stonework of the priest's door.

In 1325 a bell was hung in the belfry to call the Hospitallers from the fields for services. It is the oldest bell in Middlesex.

When Henry VIII dissolved the monasteries he seized the Hospitaller's estates, including Kingsbury. He then granted Kingsbury to St Paul's Cathedral in 1544.

The current building is largely 15th century, with Victorian-era restoration. The interior features a number of medieval brasses and memorials from the Elizabethan period. The earliest is a brass to John Shepherd (d. 1520), flanked by figures of his wives Anne and Maude. Look for the memorial brass to Susan Gawen (d. 1607) and the memorial to her father Thomas Scudamore, who gave a bell to the church in 1604. A later memorial records the tragic death of four brothers of the Sidebottom family who drowned in the Kingsbury Reservoir in 1835.

The turmoil of the English Civil war struck St Andrew's hard. The parish priest was removed in 1649 for his Royalist sympathies, to be replaced by a succession of three Puritan ministers. After the Restoration in 1660, the church returned to Protestant worship with yet another new vicar.

In the 18th century, Kingsbury's church became a popular destination for antiquarians. Willliam Stukeley, the brilliant and opinionated antiquarian, claimed that the church stood within a Roman camp used by Julius Caesar in his abortive invasion of Britain in 54 BC. Unfortunately for Stukeley's theory the 'Roman earthworks' proved to date from the 13th century.

In the 1880s William Gladstone used to visit the church when staying with friends at nearby Dollis Hill House. The famous politician and Prime Minister sometimes read the lesson during Sunday services.

In WWII bomb blasts blew out church windows, and several residents were killed. They are buried in the churchyard.

The building is no longer used for regular Anglican worship and is in the care of the Churches Conservation Trust. The Trust has made arrangements with the local Romanian Orthodox Church, who are now using the church for their services. As of this writing, interior access is only by appointment. See the Trust website for full details.