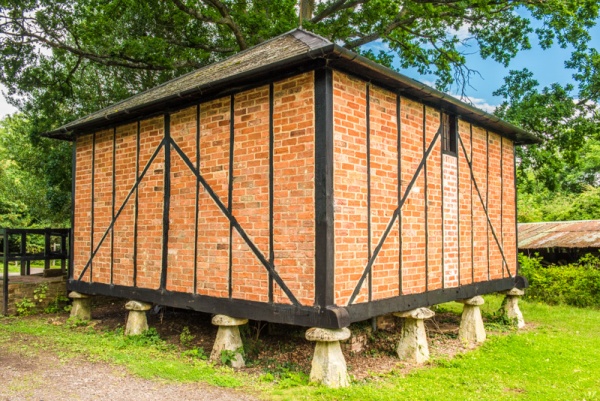 This museum of vernacular buildings lets you visit a Victorian farmyard, a 1940's prefab, medieval fields, an Iron Age house, or almost 30 other historic buildings. If, after all that, you need a break, just pop into the Edwardian public convenience.

This 4-acre museum was founded in 1976 to rescue and restore historic buildings throughout the Chilterns area that might otherwise be destroyed and lost forever. Rescued buildings are carefully taken apart, transported to the museum site, and meticulously reassembled.

More than 30 historic buildings are set within a mix of park and woodland countryside. The museum has just a few full-time staff and relies on over 200 volunteers to preserve and present their historic collections. The museum is regularly used as a location for filming, and was used in the popular BBC drama 'Downton Abbey'. It is also used as a venue for regular historical re-enactments.

The short version of 'what to see' is 'a bit of everything', for the museum covers such a wide array of vernacular buildings, covering every aspect of life in the Chiltern region over the centuries.

One of the most interesting features is a working Chilterns Farm, where visitors can see traditional farming methods and equipment in use. The farm buildings are laid out to show how a traditional farm might have looked over the years from 1800-1950. Farm buildings include a threshing barn, brought from Chalfont St Peter, a cart shed and stable from Marsworth, a cattle byre from Borehamwood, and a granary from Rossway.

One historic building is not moved from elsewhere; the Iron Age thatched roundhouse is a replica of a traditional circular Iron Age home, built using original tools and techniques.

Another highlight building is Astleham Manor Cottage, a medieval hall house from Shepperton, Middlesex. Henry VIII is said to have used the house as a hunting lodge. The cottage houses the museum's library, with archival collections on the history of the museum's buildings and on vernacular architecture in general. 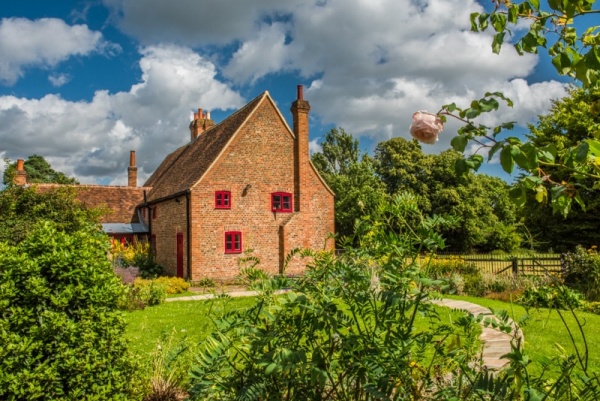 A popular building - for practical reasons - is the Edwardian public conveniences from a tramstop in Caversham, Berkshire. Built in 1906, it retains its original fittings, including washbasins, wc bowl, and urinals. It also still fulfils its original purpose as a public toilet and is stocked with carbolic soap to add an extra touch of authenticity. 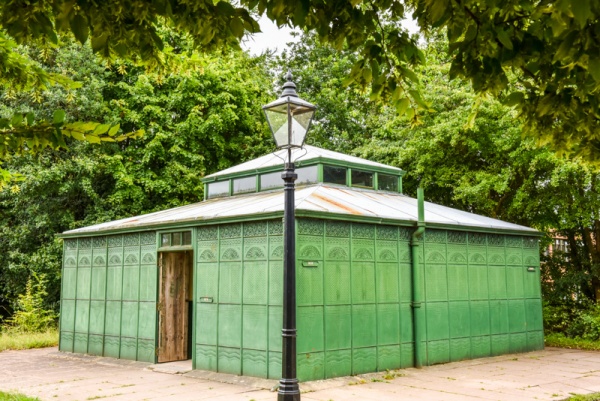 A 16th-century barn from Northolt, Middlesex, used for storing animal fodder for sale in London. Try your hand at building a timber-framed building using a scale model inside the barn. The barn was subject to 3 arson attacks in its original location so it was removed to the museum for preservation. In order to move the barn, it had to have its Grade II listed status removed temporarily. The barn was probably built around 1595 as evidenced by that date carved into the left door post. 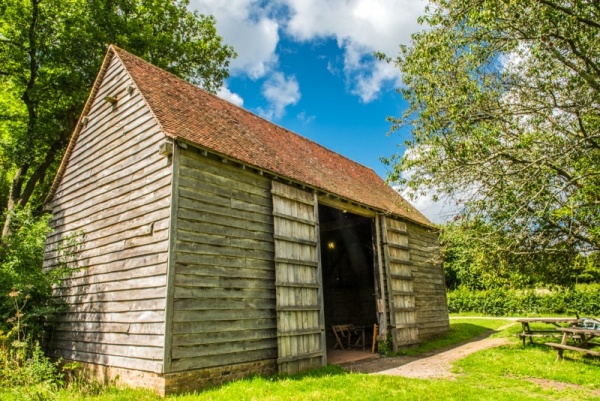 Nissen huts were designed for military use during WWI and named for Major Peter Nissen of the 29th Company, Royal Engineers. Three prototypes were built before the design was formalised in April 1916. Nissen huts were cheap and easy to assemble. A 16-foot hut could be put up in 6 hours by 4 men. The record is one hour and 27 minutes. We do not know where it was originally used, but after the war, it was re-erected at Sewell Farm, near Dunstable, Bedfordshire, and used as a farm building. The hut has been fitted out as a WWII briefing room, and visitors can enjoy trying on RAF uniforms and gas masks. 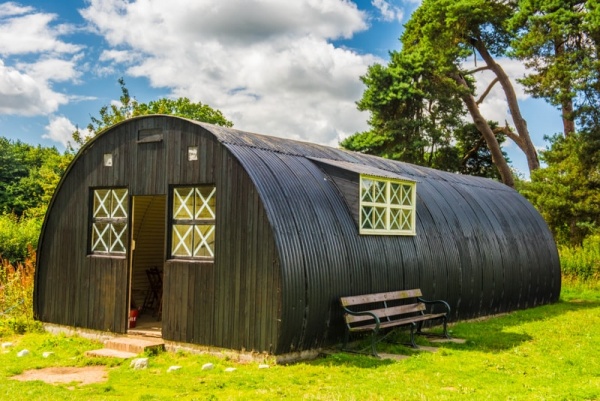 A later 'prefab' is a post-war bungalow erected on the Finch Lane Estate in Amersham in 1947. It was intended as temporary accommodation to deal with a housing shortage after the end of the war, but many of these 'temporary' buildings stayed in use for 3 decades. This prefab remained occupied for 40 years and the last family moved out in 1987. It was scheduled to be demolished but was salvaged and moved to the Museum. The prefab was manufactured by the Universal Housing Company of Rickmansworth and made with asbestos panels. It was made in sections and reassembled on site in as little as 10 days.In the garden is an Anderson Shelter serving as a garden shed. 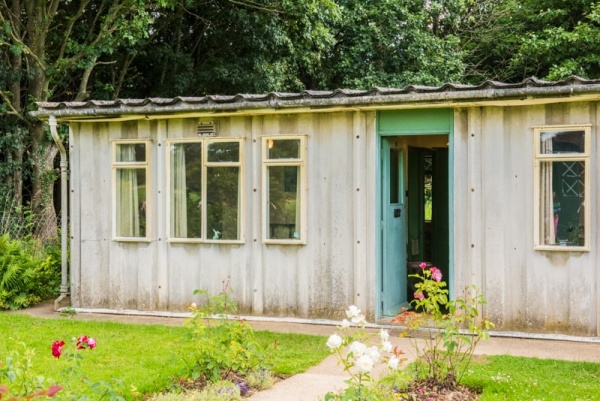 A picturesque 18th-century barn from Leagrave converted into a pair of cottages in the 1770s. Recorded interviews with members of a family who lived in one of the cottages in the early 20th century have helped restore it to show how it would have looked in 1920. The cottages are joined by a central stair, allowing visitors to go up the stair in the 18th century and come down in the 1920s. 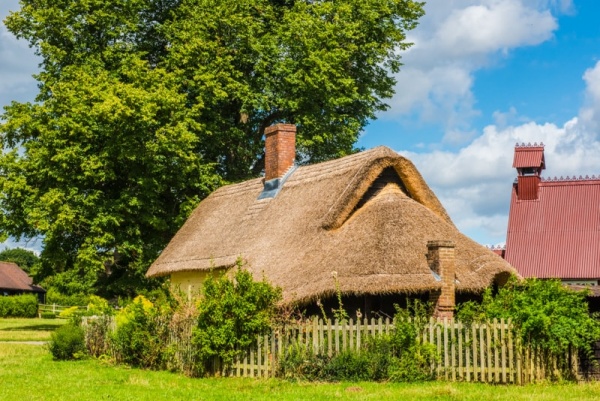 This delightful prefab church comes from the hamlet of Henton, near Chinnor, Oxfordshire. It seems that the people of Henton were not happy having to travel to Chinnor for services. The rector and churchwardens persuaded Magdalen College, Oxford, to lease a plot of land at a cost of one shilling annual rent, and there they erected this tiny prefabricated church building. Services at the Mission Room were only held once a month due to its remote location.

The Mission Room was built in Norwich in 1886 by the Boulton and Paul Company and transported by rail to Henton where it was re-erected. It was known locally as the 'little tin church'. A corrugated iron exterior hangs on timber-framed sections bolted together. It was lit by two oil lamps suspended from the ceiling. 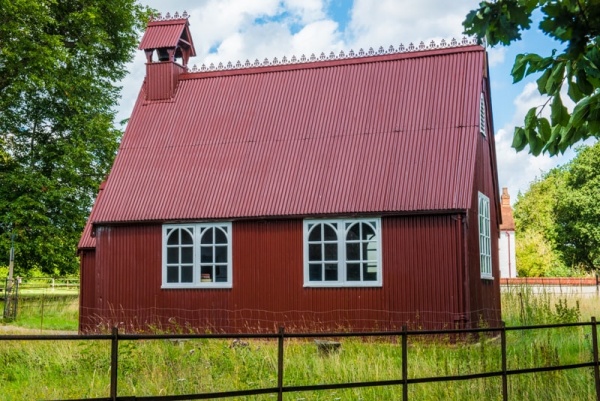 Another historic building is the late Victorian vicarage room from Thame. This prefabricated building was erected in the vicarage garden and used for lectures and church meetings. 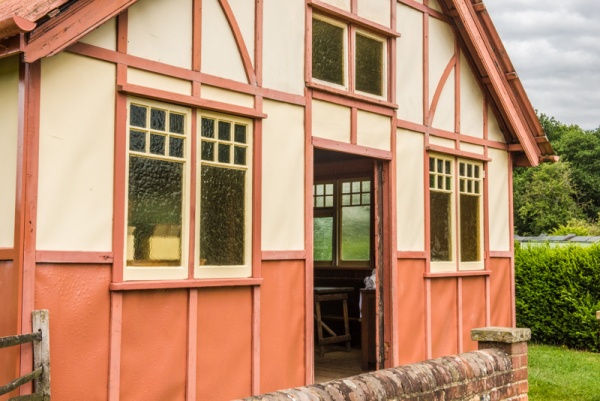 This fully functional Victorian forge comes from 51 Horseshoe Lane in Garston, near Watford. The hearth comes from Naphill and the bellows from Leavesdon Hospital. The Forge was built in 1860 and fell out of use in 1926. Throughout that entire period, it was used by the Martin family, who provided generation after generation of blacksmiths. The Forge walls are of brick, many of them marked with the initials 'JC' for the John Chapman brickworks in Garston. The walls use 7200 bricks in total, and there are 850 grey slate tiles from North Wales on the roof under decorative clay ridge tiles. The Forge was dismantled and moved to the Museum in 1982. 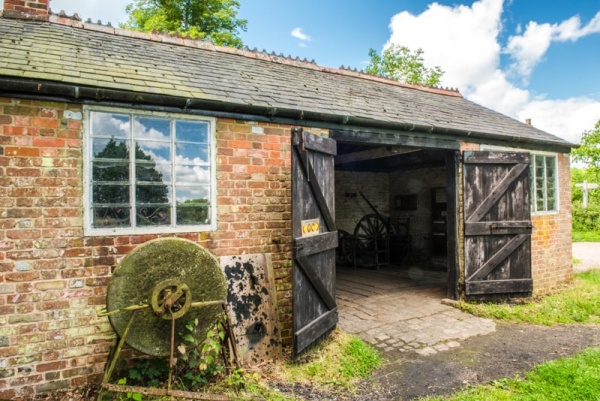 This picturesque building is a wonderful example of a cruck-framed barn, used for storing livestock and produce. The barn stood at Carters Hill Farm in Arborfield, near Reading, Berkshire. It was built around the year 1500 and re-erected here in 1980. The barn has medieval-style thatching supported on huge oak beams. Arborfield Barn is unusual in having the entrance in an end by rather than in the centre of the front wall. This made it unsuitable for threshing grain, suggesting it was used solely for storage.

The large oak beams are held together with wooden pegs. The spaces between the beams are filled in with woven panels of split green oak. The woven oak panels allowed air movement, and the circulating air kept produce dry. 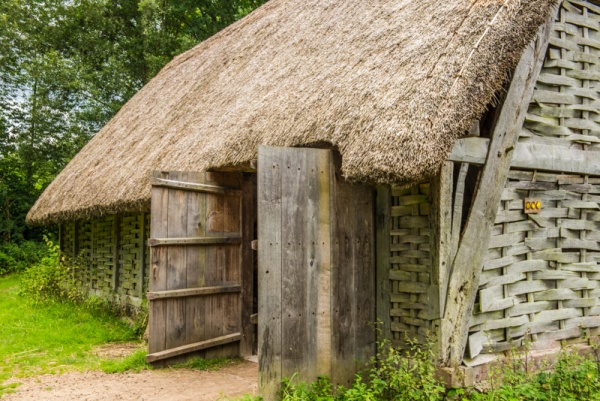 This delightful little house was built in 1826 for the Collector of Tolls on the London to Oxford road (the A40) at High Wycombe. It is hard to believe that this tiny building was home to a family of 5. The Toll House is furnished as it would have looked in 1860. In front of the Toll House is a large sign with all the tolls due, including 10d a score for cows and oxen passing through the toll gate. 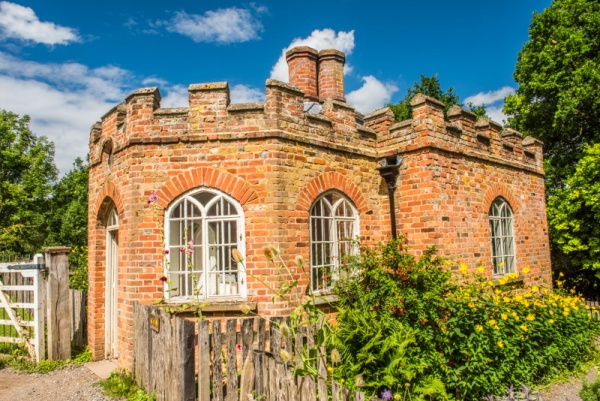 Near the Toll House is an 1862 Coal Duty Post, set up by the Corporation of London to mark the boundary at which tax was due on coal being transported into London. The Coal Duty Post was originally beside the River Wraysbury between Longford and Colnbrook. It was made by the Regents Canal Iron works in London.

A small baker's granary used to store grain. It originally stood behind the bakery at 17 Vicarage Lane in Wing, Buckinghamshire. It was probably built around 1820 and fell out of use when the bakery closed in 1881. The bakery closed and was converted to a dwelling. The daughter of the last baker donated the granary to the Museum in 1979 to prevent it being demolished when she sold the house. 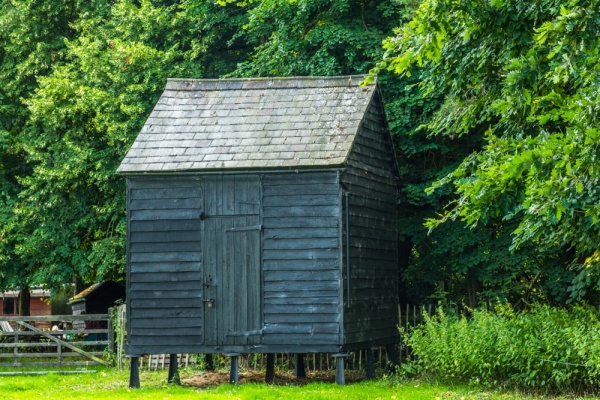 This 'motor house' or domestic garage was built in the 1920s to serve a new housing development along Western Avenue in Henley-on-Thames, Oxfordshire. This prefab garage was made of softwood panels bolted together. The front and rear doors are replacements, but the wall panels are original. The panels are clad with corrugated iron painted with green oil gloss. There is a single iron-framed window in the back wall. The garage was the last one remaining on Western Avenue when it was donated to the Museum in 2014. 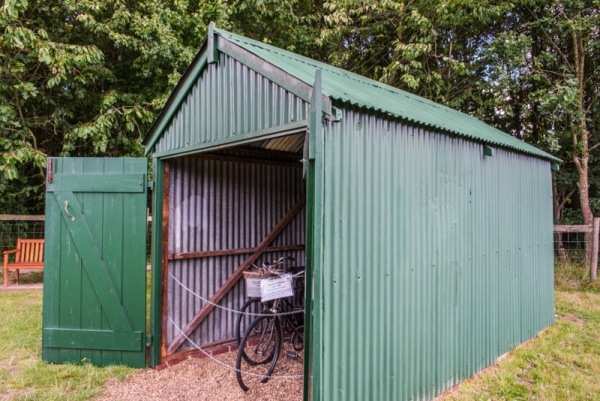 These are just a few of the buildings that caught our eye as we explored this wonderful collection of historic buildings. What makes the Chiltern Open Air Museum so much fun to explore is the sheer variety of historic buildings, from prefabs to thatched barns, from medieval to 20th century, from farm buildings to garages and shops to apple stores. There are such a huge variety of buildings to explore. All the major buildings have historical information placards with details on the origin of the building, how it was built, and how it was used. You could easily spend an afternoon at the Museum, and children will love it. 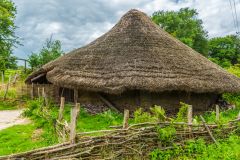 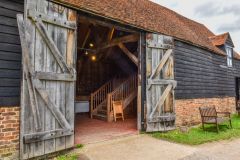 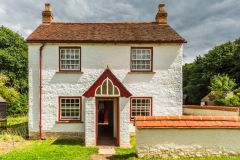 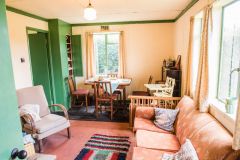 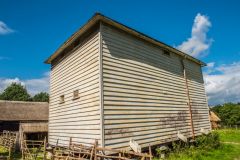 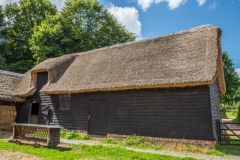